I try not to let my skepticism slide over into cynicism.  The latter, a disbelieve-everything-they-say approach, seems to me to be as fundamentally lazy as gullibility.  Being a skeptic is harder, but ultimately more likely to land you near the truth; keep your mind open, wait for hard evidence, and then follow that wherever it leads.

But there are some realms in which I am reminded of Lily Tomlin's line, "No matter how cynical I get, it's just not enough to keep up."  And one of those is the way fracking is being presented by the powers-that-be.

Consider the highly publicized publicity stunt by Colorado Governor John Hickenlooper, who in 2013 drank a glass of fracking fluid to show how safe it was.

"You can drink it," Hickenlooper told the Senate Committee on Energy and Natural Resources.  "We did drink it around the table, almost rituallike, in a funny way.  It was a demonstration… they’ve invested millions of dollars in what is a benign fluid in every sense." 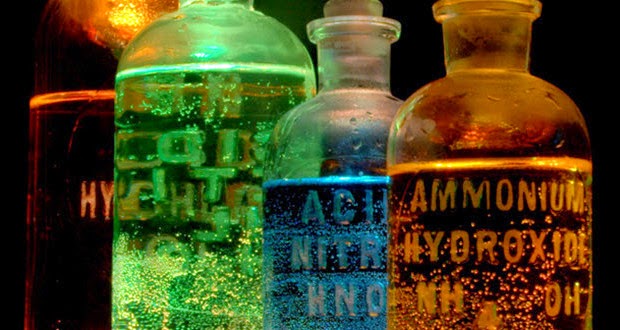 [image courtesy of photographer Joe Sullivan and the Wikimedia Commons]

The gas companies have stated outright that the ingredients are "sourced from the food industry," but still refuse to give a complete formulation for how it's made, saying such information is "proprietary."  Hickenlooper agrees, and said, "If we were overzealous in forcing them to disclose what they had created, they wouldn’t bring it into our state."

Under pressure from environmental groups, the gas industry has released a list of "the chemicals used most often" in fracking fluid, along with their purpose.  They state that "there are dozens to hundreds that could be used as additives" above and beyond these, although this is downplayed.

They look like they're doing everything they can to be completely transparent, up to the point where it starts to jeopardize their trade secrets.  "Here, we'll show you what we're doing!" they seem to be saying.  "You want the water supply protected, and safety to be paramount?  Well, so do we!"

Then you have to wonder why the industry has not rushed into the breach when people have been injured by the chemicals in their "benign" fracking fluid.  Makes you almost think they're... covering something up.

In 2008, a gas driller, Clifton Marshall, came into the emergency room in Durango Mercy Regional Medical Center in Durango, Colorado, after he had spilled fracking fluid on his clothes and boots.  Marshall was in a bad way, but it didn't end there; Cathy Behr, an emergency room nurse, spent ten minutes working on Marshall without using adequate protective equipment.  By this time, the emergency room had to be cleared because the smell of the chemicals was strong enough to make people gag.  But Behr, who had come into direct contact with the contaminated clothing, was to experience worse.  Two days later, the nurse found herself back in the emergency room, but this time because she was sick; she had jaundice, and was vomiting and feverish.  The doctors found that Behr was in multiple organ failure from "poisoning by an unknown chemical."

Pressed by the hospital to tell them what was in the fracking fluid that sickened Behr and Marshall, the gas company -- Halliburton Industries -- refused, saying it was a trade secret.  If anyone released what was in the fluid, they said, they would sue -- and then pull their multi-million-dollar drilling operation from the state.

Hospital officials backed down.  To this day, no one knows what was in the fluid.

In a rural community in Pennsylvania -- no one knows exactly where, for reasons you'll see in a moment -- the owners of a 300-acre dairy farm signed a land-use agreement with a gas company, allowing fracking on their land.  The disturbance would be minimal, the gas company said, and the risk slight.  After the drilling began, though, the family who owned the farm, the "Rogers" family (not their real name), began to question the effects that the operation was having on their drinking and agricultural water, and agreed to participate in a study by an independent agency to monitor what was happening.

But they couldn't do that, they found out quickly.  Here's how TruthOut reported the story:

The Rogers did not realize they had signed a nondisclosure agreement with the gas company making the entire deal invalid if members of the family discussed the terms of the agreement, water or land disturbances resulting from fracking and other information with anyone other than the gas company and other signatories...

Mrs. Rogers initially agreed to participate in a study Perry [the scientist coordinating the study] was conducting on rural families living near fracking operations. She later called Perry in tears, explaining that her family could no longer participate in the study because of the nondisclosure clause in the surface-use agreement. She told Perry she felt stupid for signing the agreement and has realized she had a good life without the money the fracking company paid them to use their land.

There are also dozens of cases where gas companies have been sued because their operations have permanently contaminated drinking water supplies, and have settled in the litigants' favor -- but only on the condition that the litigants sign a statement mandating that they never disclose what the gas companies did.  This is an easy out for the gas companies; people will usually settle for an amount of cash that the gas industry considers a pittance as compared to the bad press they'd receive if such information became public.  "At this point they feel they can get out of this litigation relatively cheaply," Marc Bern, an attorney with Napoli Bern Ripka Sholnik LLP in New York, who has negotiated on behalf of homeowners, said in an interview.  "Virtually on all of our settlements where they paid money they have requested and demanded that there be confidentiality."

There are also multiple cases where doctors have appealed to gas companies to release what is in fracking fluid, to allow the doctors to treat patients poisoned by exposure to it, and the industry has complied -- but only if the doctors themselves agree to a lifelong nondisclosure statement.

And state governments are caving in from the pressure by the industry.  Just last year, North Carolina passed a bill that made it a crime for anyone to disclose the constituents of fracking fluid.  The name of the bill?  The "Energy Modernization Act."

Still think that the gas companies are all about safety and transparency?  Then consider one more story, again from southwestern Pennsylvania, only two years ago.

Chris and Stephanie Hallowich lived with their two children, then 7 and 10, in a house in rural Washington County, when they started experiencing health issues from water that had been fouled by a fracking operation nearby.  They were desperate to get out of their house, and sued the gas company, Range Resources, for enough money to cut their losses and move.  Range Resources agreed to a $750,000 settlement, but required (guess what?) a nondisclosure agreement.  The Hallowichs could not speak to anyone about fracking, or the Marcellus Shale, or Range Resources, or their symptoms, or the contamination to their water supply, ever.

And that lifelong gag order also applied to their children.

The Hallowichs' attorney, Peter Villari, said directly to Washington County Common Pleas Court Judge Paul Polonsky, who heard the case, "I, frankly, your Honor, as an attorney, to be honest with you, I don’t know if that’s possible that you can give up the First Amendment rights of a child."  Pozonsky didn't have an answer to that except that this is what the Hallowichs had to agree to if they wanted to settle.

"That someone would insist on confidentiality of a minor child," Villari said, "or that it would be discussed within the context of a proposed settlement was unusual.  I have not encountered it before and I have yet to encounter it again."

"Unusual" isn't the word I'd use.  I think "unconstitutional" comes closer to the mark.

The frightening part of this is that because the gas industry is wealthy and powerful, they are pulling the strings here -- and everyone else is dancing to their tune.  They have no reason to bend.  They've been getting their own way at every turn, from politicians and courts that conveniently ignore the dangers to ordinary citizens because (frankly) money talks.

Where this skein of lies comes full circle, though, is in asking why the gas companies are this protective of the ingredients in the fracking fluid.  I simply don't believe that this is a trade secret that is worth keeping simply from a proprietary-protection argument alone.  Surely each of these companies can't have discovered a formula that they think is so wonderful, so much better than their rivals', that they'd engage in all of these dubiously-legal shenanigans to protect it?

Isn't it just slightly more likely that there's something in this fluid that is not exactly "benign?"  Something that might, in fact, be toxic enough that to make it public would alert the public to how much danger they're actually in?

But surely the Toxic Substances Control Act would protect the public from this kind of thing.  That's why it was passed.  Right?

Wrong.  TSCA has an exemption for reporting "Tier 2" exposure to chemicals -- i.e., exposure that happens after the chemicals leave the site of manufacture -- for "petroleum process streams."  If you're exposed to fracking chemicals, you have no federal leverage to force the industry to give you information, much less to force them to stop what they're doing.

So the only way all of this will halt is if enough people know about it, and refuse to sign the fracking leases.  Already we're seeing cases of eminent domain being invoked in laying in pipelines to carry the gas; the only way to halt the industry is to cut off its source.

Which is why it's so critical that people find out about these things.  Because as we've seen, once the damage is done, the industry has been more interested in hushing it up than cleaning it up (or, heaven forfend, changing their ways).  And if that doesn't justify some level of cynicism about their commitment to decency, safety, and public health, I don't know what would.
Posted by Gordon Bonnet at 3:41 AM