A couple of days ago there was a story out of North Dakota that's been making the rounds of the "Weird News" departments of various news agencies.  It's about a housing development in Fargo that has been "swarmed" by "dozens of dog-sized jackrabbits."

Fargo resident Kayla Straabe told and ABC News reporter, "Every day, I feel like the crazy rabbit lady chasing them out of the yard where they're having a heyday.  There's at least 40 to 50 everyday, and they're in our yards and by a children's park."

The city pest control department claims not to be able to do anything about them, "because they're wild animals."  This strikes me as pretty peculiar.  Aren't all pests wild animals?  I mean, it's not like people are usually bothered by infestations of hamsters, or anything.

Be that as it may, the pest control department wouldn't do anything, but suggested that Straabe and others poison the jackrabbits, which she doesn't want to do.  So at the moment, the jackrabbits are still swarming in Fargo.

Which is an unremarkable enough story, until you look at the comments section.

Yes, yes, I know, sane people should never look at the comments section.  But I was curious as to what people thought about the cause, and what steps they thought should be taken, for this "flock of jackrabbits," a phrase which made me picture flying bunnies.  (I looked it up, and the correct collective noun for jackrabbits is a "husk," which to me sounds even weirder.  I suggest calling them a "lope of jackrabbits," which is much more euphonious.)

Some of the comments were reasonable enough.  A bunch of them suggested turning the jackrabbits into stew.  A couple recommended, given that it's Fargo we're talking about, running the jackrabbits through a wood-chipper.  But then things got weird, because people started weighing in on where the jackrabbits had come from in the first place, and it went downhill thereafter.

Here are a few samples.  Spelling and grammar have been left unaltered so you can get the full effect.


The government doesn't want you to see what's really happening with animals going on the rampage and flocks of birds dying and the news writes articles like it's completely normal?  Wake up.  This is only the first signs.

Its a mutation.  Rabbits this huge, its not normal.  We spray pesticides all over the place and now we're reaping what we sow.

Rabbits is one thing, what if this had been wolves?

They can carry rabbies and they let them near a playground?  Bring them to Washington DC and let them go there.  You'll see how fast they disappear, and you won't hear the liberal lame stream media crying about the poor bunnies.

Before the anti gun crazies got in charge, we would have known what to do about them before it became a problem.

Giant rabbits, another sign of the unnatural things this government is doing.  Genetic engineering experiments gone wrong, and no one wants to blow the whistle, instead this will become more common until one day it becomes too late to do anything about it and people start dying.

Okay, will you people please just calm the fuck down?

These aren't vicious giant mutant bunnies, they're regular old jackrabbits.  According to the Wikipedia page on jackrabbits, this species normally gets to be two feet long and up to six pounds, which is (as the article said) the "size of a small dog."  No mutations, genetic engineering, or other "unnatural things" necessary.

And the bunnies haven't "gone on the rampage," they don't seem to be carrying "rabbies," and allowing people to run around shooting rabbits near a playground would create a whole different set of problems, you know?

So fer cryin' in the sink, let's take a deep breath, and relax.  This is not the Killer Rabbit of Caer Bannog we're talking about here. 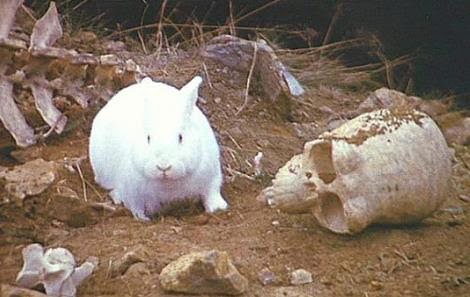 Chances are, the jackrabbits have been driven into residential areas because it's winter and the foraging out in the wild is pretty slim, so they're going for decorative plantings in people's yards, which are more accessible through the snow.  The same thing happens in our area, but with white-tailed deer.  The deer, however, are kind of a nuisance year-round.  In some areas they make it impossible to have a garden unless you surround it by six-foot-high fence topped by razor-wire, and the number of car-deer collisions in upstate New York is astronomical.

On the other hand... maybe the deer are part of this whole evil scheme.  Mutated genetically engineered deer, released by Monsanto, so that we can't grow our own vegetables, and will be forced to purchase genetically-modified crops from grocery stores.  Probably the auto-repair industry is in on it, too, making sure the deer are bred to be attracted to car headlights.

And... and... it all started with Disney.  Remember Bambi?  Making us feel sorry for the poor little deer whose mother was killed by hunters.  And guess who Bambi's best friend was?

I guess that's enough evidence isn't it?  I believe we now have what the lawyers would call a "hare-tight case."
Posted by Gordon Bonnet at 2:58 AM