One of the things that really bugs me is when people accept the vague hand-waving fears of laypeople over the hard evidence and research of actual scientists.

I suspect it's because we've been taught to respect common, down-home, folksy talk more than the esoteric vocabulary of the ivory-tower intellectuals.  We read articles online, and they seem to have been written by "ordinary folks like us," and after all, "ordinary folks like us" wouldn't lie, right?  Add that to the fact that scientific papers are often confusing and difficult to follow, many of them using abstruse mathematics to support their conclusions, and I suppose it's not really that surprising that we're more likely to trust The Daily Mail than Nature.

But for criminy's sake, at least try to understand what the scientists are saying.  Otherwise we'll be stuck forever with nitwits like Jenny McCarthy altering national vaccination rates, and mental midgets like James Inhofe driving environmental policy.

This tendency, I suspect, is also why you see articles like the one that appeared a few days ago on Intellihub called "Yellowstone Supervolcano On Verge of Eruption: USGS Suppressing Information."  The title is self-explanatory; we have more fear-mongering over the potential for a catastrophic eruption, one which (according to the article) would "destroy a 1000-mile swath of the United States."

But this article is different, because it claims that the eruption is going to happen in the next two weeks. 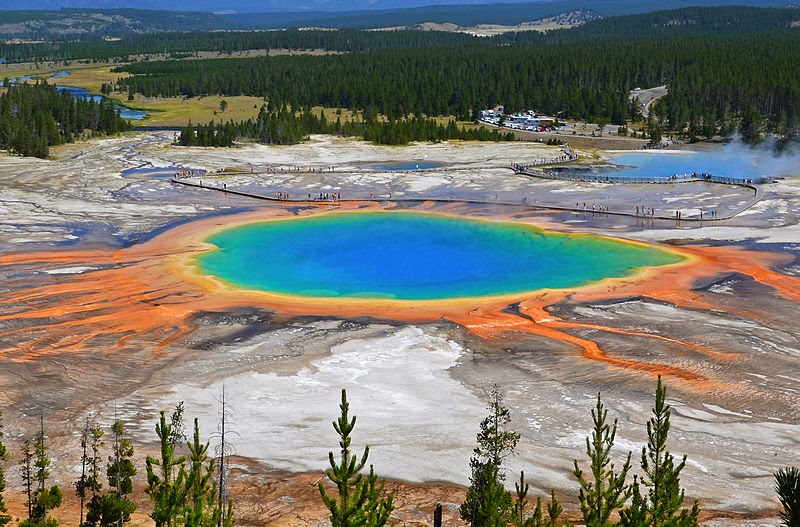 First, the article states that the warning came from one Hank Hessler, a park geologist.  This sounds pretty authoritative; and, in fact, Hessler is a real guy with real credentials.  But if you listen to the YouTube video where the whole nonsense started, you find that what Hessler actually said was that regarding what the volcano is doing, he "can't see past two weeks" -- in other words, the conditions in the magma chamber shift quickly and unpredictably, so making a prediction about what this or that hot spring will do is impossible more than two weeks out.  But how this was interpreted by the YouTube commentator, and every other damn blogger and news source that picked this up, was that Hessler couldn't see past two weeks because after that, we'd all be dead.

The Intellihub article goes further; there's a massive coverup by the United States Geological Survey, designed to keep us in the dark about all of this.  Why?  Who knows?  Because it's government, that's why, and obviously government exists only to kill us all.  But this is where it gets interesting, because Shepard Ambellas, author of the article, starts waving his hands around like mad to support the claim.  "Although no one knows for sure if Hessler’s prediction will come true," Ambellas writes, "it does set an eerie overtone for people located within a 1000 mile swath of the park."

Why is it eerie if no one knows if it's true?  How about we check with a scientist that Ambellas hasn't had a chance to misquote, like Ilya Bindeman of the University of Oregon:


Our research of the pattern of such volcanism in two older, 'complete' caldera clusters in the wake of Yellowstone allows a prognosis that Yellowstone is on a dying cycle, rather than on a ramping up cycle. Either the crust under Yellowstone is turning into hard-to-melt basalt, or because the movement of North American plate has changed the magma pluming system away from Yellowstone, or both of these reasons.

Based upon his studies, he believes that the next Yellowstone eruption might actually happen...

But let's go back to Ambellas:


On March 4, 2014, Intellihub came across information, by an unnamed source, who reported that the White House had ordered the United States Geological Survey (USGS) to suppress earthquake swarm data within the region to hide what may be coming from the general public.

Oh, those unnamed sources.  So much more reliable than actual scientists.

And we're already overdue, Ambellas says, because clearly volcanoes are like trains and run on schedules:


In fact reports suggest that ancient Helium4 gas has breached the surface layers of Yellowstone’s crust and is now escaping into the earth’s atmosphere.  Coupled with the recent and abrupt ground level rise in the park we may be looking at a recipe for disaster...  In fact, the last Yellowstone eruption was thought to have happened around 630,000 years ago, meaning we are about 30,000 years overdue, literally putting us in the hot seat, front row.

But the best part comes right at the end:


And it gets even worse. Although there is no way I can vouch for the information, I simply can’t. But according to a random individual who posted a video on YouTube, the USGS has likely been ordered by Washington to suppress information regarding recent seismic activity and gaseous releases in and around the Yellowstone region as a possible ELE [extinction-level event] is on the way.

Not a "random individual who posted a video on YouTube!"  Those guys know everything.  Certainly more than the evil scientists, who are in the pay of the USGS and the NSF and the NOAA and all sorts of other agencies whose names are made up of a bunch of scary letters.

But the part that jumped out at me was "there is no way I can vouch for the information, I simply can’t."  If you can't vouch for the information, then for fuck's sake, why are you writing about it?  This is science you're talking about, not the latest gossip on the Kardashians.  There are ways to verify science, and you don't do it by looking at what Mr. Random Individual posted on YouTube.  You read scientific papers (like this one and this one).  You (gasp!) learn some actual geology.

So sorry, Mr. Ambellas (because you actually sound like you're looking forward to it): the US is not about to be destroyed by a volcanic eruption.  The only scientist you even considered in your article, you misquoted and misinterpreted (and if I were Hank Hessler, I'd be pissed).  You're getting a lot of non-scientists stirred up, which I have no doubt was your goal.

But I wish you'd stop.  Because the last thing we need is to give the general public a more jaundiced view of science.  And that's what's going to happen, you know?  When two weeks passes, and we're all still here, unvaporized, your average layperson is much more likely to say, "Those dumb scientists, forecasting gloom and doom, and wrong as usual" than the correct response, which is, "Shepard Ambellas lied to us so that we'd click on his website."
Posted by Gordon Bonnet at 2:41 AM