The loveliest of all was the unicorn

It is probably my own lack of tolerance, empathy, and compassion that makes me laugh out loud when I hear the "arguments" people use to support biblical literalism.

I mean, they can think what they want, right?  No amount of railing by the likes of me is going to rid the world of wacko counterfactual thinking, much as I'd like to live in my own fool's paradise in thinking I'm making a dent.  So why not just ignore 'em?

Of course, I can't, as you well know if you've been following this blog for very long.  The biblical literalists still have too powerful a voice in American politics to be dismissed as inconsequential.  It'd be nice if we were in a place where Bronze-Age mythology wasn't driving legislation and educational policy, but we're not there, yet.  That's why my laugh directed at two stories I ran across yesterday rings a little hollow. 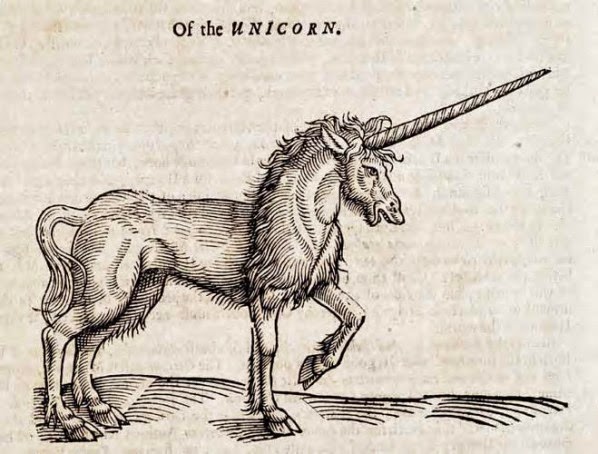 Apparently, since the bible mentions unicorns, to disbelieve in them is to "demean god's word."  She cites Isaiah 34:7 ("And the unicorns shall come down with them, and the bullocks with the bulls; and their land shall be soaked with blood, and their dust made fat with fatness"), a passage that I not only find funny because of its mention of a nonexistent animal, but because of the phrase "fat with fatness."  I think this is a pretty cool use of language, and one that we should emulate.  We should say that a cow is not just big, it's "big with bigness."  The night henceforth will be described as "dark with darkness."  The ocean is "wet with wetness."

Mitchell says that the unicorn could have existed because there are other one-horned animals, such as the rhinoceros and the narwhal.  (Yes, I know that the narwhal's spike is a tooth, not a horn.  Mitchell doesn't let facts intrude on her explanation, and neither should you.)  Then she goes on to say that the unicorn could have been the aurochs, an extinct species of wild ox.

But oxen have two horns, you're probably thinking.  Mitchell says that this can be explained because if you look at an ox from the side, it looks like it has only one horn.  There's archaeological evidence of this, in carvings of oxen from the side "on Ashurnasirpal II’s palace relief and Esarhaddon’s stone prism," and lo, those carvings show oxen in profile with only one horn visible, as hath been revealed by Dr. Mitchell. 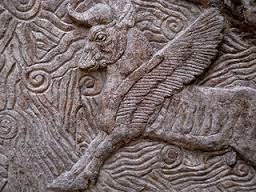 This ox also hath wings, which may be a problem for Dr. Mitchell's argument.  [image courtesy of the Wikimedia Commons]

You have to wonder how Dr. Mitchell would explain that the bible also says that bats are birds (Leviticus 11:13-19), that the Earth doesn't move (Psalms 93:1), and that in one place it says that men and women were created simultaneously (Genesis 1:27) and only a few verses later, it says that god made men first (Genesis 2:7).

I dunno.  Maybe the contradictions and inaccuracies look different if you look at them from the side.

The second story comes from our old friend Ken Ham of Answers in Genesis, who has his knickers in a twist over a resolution in Congress to consider February 12 as "Darwin Day."  Ham, of course, thinks this is a bad idea, and has given a countersuggestion; let's call February 12 "Darwin Was Wrong Day:"


Secularists are becoming increasingly aggressive and intolerant in promoting their anti-God philosophy.  Evolutionary ideas provide the foundation for this worldview because they seemingly allow mankind the ability to explain the existence of life and the universe without God.  As Christians, we need to be bold in proclaiming the truth of God’s Word to a hurting (groaning, Romans 8:22) world.  This year, on February 12, instead of celebrating Darwin’s anti-God religion, we can take this opportunity to show the world that Darwin’s ideas about our supposed evolutionary origins were wrong, and that God’s Word is true, from the very beginning.  Let’s make February 12 Darwin Was Wrong Day and point people to the truth of God’s Word.

Well, I'm not sure we secularists are "aggressive and intolerant" about evolution so much as we are "right."  To return to the point I began with, it's hard not to be intolerant when (1) you have mountains of evidence on your side, and (2) the people arguing against you are determined to have their views drive national policy.

A funny thing happens, though, when you put the Mitchell story and the Ham story together.  We have the former putting forth the loony view that all of the inaccuracies and contradictions in the bible can be resolved and explained (and the ones I mentioned are only scratching the surface), along with a demand that everyone believe that the bible is literally, word-for-word true anyhow (and should be used as a primary source in science classrooms).

It's to be hoped, however, that more and more people are realizing how impossible it is to reconcile the contradictions, and that therefore biblical literalism fails right at the starting gate.  Maybe that's why people like Mitchell and Ham are becoming more strident; they sense that they're losing ground.

Or maybe they're just "crazy with craziness."
Posted by Gordon Bonnet at 2:51 AM