What is it about President Obama that has brought out the conspiracy wingnuts in droves?

Maybe it's just that I wasn't as aware of such things back then,  but I don't remember crazy conspiracy theories erupting around George W. Bush.  There were lots of people who suspected that he had that IQ of a baked ham, but you didn't hear the sort of loony claims that we're seeing with Obama. 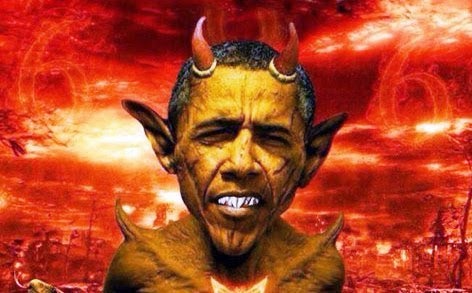 Here's a sampler of some Obama conspiracy theories I found -- all from the last couple of days:

From a letter to the editor in the Davidson County (Tennessee) Dispatch:


God states that seven kings must come before the rise of the Antichrist. Revelations 17:10 says the seventh king will reign for a short amount of time. Is Barack Obama the seventh king?

Obama's lifted sanctions off Iran with promises that a peace treaty will be made but does nothing to inspect Iran as they continue to make nuclear weapons. Does Obama already know Iran's actions and is helping Iran? God says Israel must be attacked by Iran to start a war between all nations before the Antichrist can rise to create a peace treaty between these nations. Everything God said is happening. The Lord can return for God's children at anytime.

From an article in The Daily Coin:


The ever encroaching police state, the fact that all financial markets, over the entire global, are rigged. Since when does the President come out and tell Congress that he needs omnipotent powers to continue to expand the wars of aggression? What next, maybe world war; cast a dragnet across the internet to begin scooping up owners of alternative news websites? Perhaps begin systemically killing the bankers in the back office with the codes and programs that run the derivatives markets and rig the equities markets?

From Family Research Council's commentator Craig James, in response to a caller who claimed that Obama was planning to stay in office for a third term, and using that term to convert all Americans to Islam:


Obama trying to stay in power for an illegal third term is a concern of mine.  I plan to pass a note along to [FRC President] Tony Perkins on how we could escape that.

[A third term] would be horrible.  It’s not like we’d have Ronald Reagan staying in office for another year or so while we’re in a state of emergency.  It’s not like we’d have someone who really cares about you and me.  We’re talking about someone who is there in that office as the leader of the free world, the United States of America, who doesn’t get it.  That’s the concern.  It fires me up, the thought that the guy can stick around in that office beyond a year and three-quarters.  He’s got to be gone.  We will follow up on that.


I was asked about the origins of the measles outbreak in America and it’s pretty clear to me that it came in with the illegals.  We know that Obama committed a crime against humanity by dumping many, many, many, many ill people, mothers and children primarily, on us this summer unscreened, many of them brought in a killer virus, measles, tuberculosis and other illnesses.

And all of these are just from the past couple of days.

What gets me about all of this is how these claims keep sprouting, like crabgrass in a garden, even though they never come true.  We've been hearing for years now about how Obama was the Antichrist (or some other wicked dude from the Book of Revelation), and that this means the End Times are imminent.  And lo, here the world still is, un-Ended.  We've heard over and over about how Obama wants to herd us all into FEMA camps and cut our heads off with guillotines, and we're all still running around with our heads firmly attached.  We've heard that Obama wants to silence people who dislike him by any means necessary up to and including assassination, and yet Rush Limbaugh and Glenn Beck and Alex Jones and Ann Coulter are still alive and kicking and spewing their rhetoric on a daily basis.

So if Obama is an evil mastermind, he's kind of an incompetent one, you know?  He's like one of those guys on Scooby Doo who has everyone convinced that there is a scary ghost haunting the carnival, and no one can figure it out except for a bunch of goofy teenagers, who unmask the ghost and it turns out to be the carnival owner, who would have gotten away with it if it hadn't been for Those Meddling Fox News Commentators And Their Stupid Dog.

I'm kind of sick of waiting, frankly.  I mean, at this point I've been warned so many times that I'm ready for something to happen, and now's as good a time as any.  We're all snowbound, here in the Arctic tundra (a.k.a. upstate New York), and I'm feeling a little stir-crazy with the cabin fever.  Let's stir things up, okay, Mr. President?  Get together with your wicked Illuminati friends, and cast your spells to summon up Satan or whatever, and let 'er rip.  Because so far, you've kind of sucked at establishing a New World Order (or converting us all to Islam or bringing forth the Beast With Seven Heads, or whatever people think he's doing over there in the White House).  So far, you look pretty much like a typical politician, doing what politicians do.

And life can't be that prosaic, right?