What the cat dragged in

One thing I try to keep in mind when I'm reading something controversial is the fact that all humans have biases, including me.  And sometimes these biases are so powerful that they become blind spots -- something we believe so strongly that we flatly refuse even to consider any evidence to the contrary.

And when you tie in powerful emotions to these blind spots, people become so immovable in their convictions that trying to change their minds is damn near impossible.

One rather unexpected case of such a blind spot surfaces periodically on a listserv I belong to.  As some of you may know, I'm a rather rabid birder, and have been known to stand in the freezing cold for hours or trek through a leech-infested steam bath of a southeast Asian jungle just in order to see birds I've never seen before.  So I belong to a listserv called "BirdChat," so I can connect with other similarly-obsessed and dubiously-sane people around the world.  And every once in a while, someone will bring up the topic of...

When you bring up cats -- more specifically, outdoor cats -- you immediately sort the birding world into two groups.  The first has a mortal hatred of outdoor cats, and considers their toll on bird populations to be ridiculously high.  The second, which consists almost entirely of people who own cats that are allowed outdoors, dismisses those contentions as nonsense. 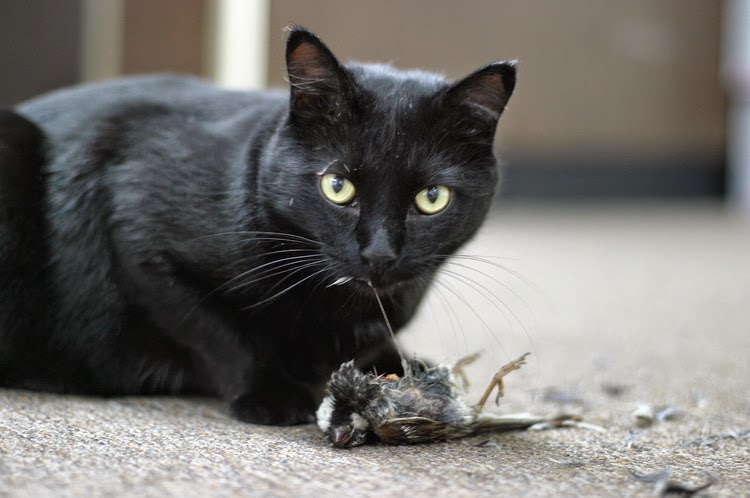 [image courtesy of Mark Marek Photography and the Wikimedia Commons]

And the battle escalates quickly.  Usually someone brings up the Stephen's Island Wren, a little flightless bird that lived only on one island near New Zealand, and which was exterminated by the islanders' pet cats.  Someone else will counter that we're not talking about small islands, here, that allowing Mr. Fluffums to catch a sparrow or two every once in a while is just allowing him to express his natural hunting instincts, and isn't hurting anything.  Some hothead will then propose turning loose coyotes near Mr. Fluffums' stomping grounds, and seeing how his owners will feel about "natural hunting instincts" then.  Tempers rise, unsourced facts and statistics are thrown around, and no one gives an inch.  Usually a moderator will have to step in and say, "You people need to stop this right now," and everyone will return, grumbling, to their respective corners, until the next time the subject comes up.

So at the risk of setting off a firestorm here, how 'bout we look at an actual peer-reviewed study regarding the subject?  Can it be true that outdoor cats are a problem, or are we looking at people who take bird conservation way, way too seriously?

Scott Loss, Tom Will, and Peter Marra wrote an article for Nature about two years ago that settles the issue, fact-wise, once and for all.  Called "The Impact of Free-Ranging Cats on Wildlife in the United States," it describes a "systematic review and [quantitative] estimate [of] mortality caused by cats," and came up with the following staggering statistics:

That's "billion" with a "b," folks.  And focus especially on the last sentence; cats are the single greatest source of anthropogenic mortality for American birds.  More than legal and illegal hunting; more than pesticides; more than collisions with automobiles, wind turbines, and airplanes.

In fact, more than all of those put together.

About the study, Dr. George Fenwick, president of the American Bird Conservancy, said:


The very high credibility of this study should finally put to rest the misguided notions that outdoor cats represent some harmless, new component to the natural environment.  The carnage that outdoor cats inflict is staggering and can no longer be ignored or dismissed.  This is a wake-up call for cat owners and communities to get serious about this problem before even more ecological damage occurs.

Pretty unequivocal, you'd think.  But the response from cat owners has largely been: silence.

The reason I bring all of this up is a conversation I had a couple of days ago with someone who was troubled because she has a bird feeder, and also an outdoor cat.  So she is, in effect, luring in birds so the cat can kill them.  Is there anything, she asked, that she can do to keep the cat from killing the birds in her yard?

I said, "Keep the cat indoors."

I gave her an incredulous look.  "Then you shouldn't have a bird feeder."

"Then keep the damn cat indoors."

Having seen the firestorms that have erupted on the BirdChat listserv, I let the topic drop.  Because when you tie in biases and preconceived notions with the emotions -- especially about something as emotionally-laden as pet ownership -- things can escalate really quickly.

The data is out there.  Let me reiterate: outdoor cats are the single worst cause of bird mortality in the United States (and, I believe, in Great Britain as well).  So if you care about wildlife, the only responsible thing to do is to keep your cats inside.

But I have to wonder how many minds this will change.  On topics like this, it's far easier to frown, say, "Oh, but this can't really be about my cat," and go on doing what you've done before.  I hope I'm wrong, mind you, because this is one topic on which the jury has weighed in, and the verdict is unarguable.

But as we've seen all too many times before, changing people's minds when they've already decided what they believe is often a losing battle.  Sometimes the attitude is "evidence be damned, I'll do what I like."
Posted by Gordon Bonnet at 2:41 AM