There are times when my desire to be a live-and-let-live, tolerant, kind human being runs smack into my general annoyance at people whose adherence to superstitious nonsense makes them act irrationally.

The whole thing comes up because of the recent disruption of several flights (most commonly from New York to Israel) by ultra-Orthodox Jewish men who believe that that their religion forbids them to sit next to a woman they're not married to.  According to a piece on the issue in the New York Times:


“The ultra-Orthodox have increasingly seen gender separation as a kind of litmus test of Orthodoxy — it wasn’t always that way, but it has become that way,” said Samuel Heilman, a professor of sociology at Queens College.  “There is an ongoing culture war between these people and the rest of the modern world, and because the modern world has increasingly sought to become gender neutral, that has added to the desire to say, ‘We’re not like that.’”

While many rabbis counsel that there's nothing wrong with a man sitting next to a woman on public transportation unless he's trying to get sexual gratification out of their proximity -- and it's hard to imagine that being likely on an airplane, although people do weird things sometimes -- there are Jewish men who will make an issue of it.  And hold up the entire flight until someone accommodates their request. 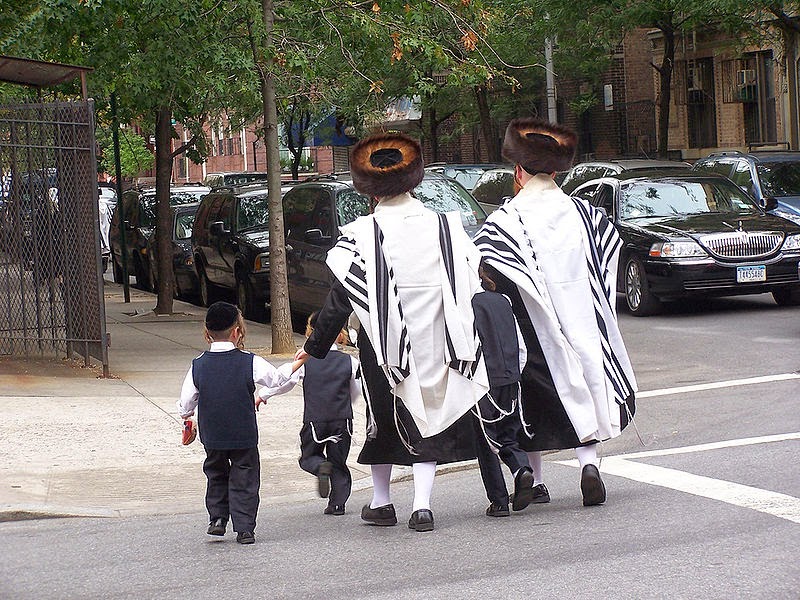 Now, despite being an atheist, I'm generally of the opinion that you can believe whatever you like, unless that belief involves coercing other people to adopt those beliefs, or passing laws mandating that your beliefs be taught in public schools.  But increasingly, it seems that a lot of people on the more extreme fringe of various religions have been using their own peculiar worldviews to reshape what other people do, demanding that everyone around them fall into line with whatever weird thing their religion demands.

I was having a discussion with a buddy of mine about the No-Gurlz-Allowed attitude of ultra-Orthodox Jewish men, and my initial thought was that demanding that the Jewish men cave in and do something that they thought was immoral might be discriminatory:


Enforcing company policies (mixed male/female seating, for example) could easily be claimed as discrimination.  Their religious practices make a demand on them that is impossible to meet unless airlines change their practices.  How is this different from saying that an evangelical Christian has to serve gays?


There's no discrimination.  The airline sells you a seat.  There's no guarantee if you will be seated next to a man, woman, Muslim, homosexual, transsexual, etc. If this bothers you, it is incumbent upon you to buy two seats so you can guarantee that no one who bothers you will be seated next to you.  Or, you have to hope that you can switch seats with someone else.  But you have no right to hold up a flight if you can't find anyone willing to do that.

And, of course, he's right.  You buy a plane ticket, you know ahead of time that you're going to get at most a single package of stale pretzels to eat on the entire flight, that the person next to you is going to immediately recline his seat so that his head is nearly in your lap... and that you could be seated next to anyone.  If your religion demands that you never sit next to a woman, you have to find an alternate means of transportation.

After all, you're the one who has accepted a belief system that significantly restricts what you can do. It's not the airline's fault you bought in.

An even more interesting question, though, is how far I'd go to accommodate such beliefs, should I be asked to switch seats.  My friend said the following:


Now, would I trade seats with the ultra-Orthodox Jew? If it is an even swap -- aisle for aisle or window for window -- sure. I may even do an aisle for window or vice versa. But I would not swap a window or aisle seat for a middle seat just to be nice to him.

I dunno.  I'd be a little more peevish in that situation, I think.  I'd want an upgrade.  "You want to make demands that everyone in the world meet your needs?  Fine.  You can sit in the middle seat between two space hogs who wear too much cologne and insist on claiming both armrests.  I'll take your nice window seat.  Thanks ever so."

But that's just me.  Like I said, I try to be nice, most of the time, but sometimes the Intolerant Asshole side of me comes out on top.
Posted by Gordon Bonnet at 2:40 AM