It's always interesting when woo-woos meld together different traditions, apparently not recognizing that if you have a ridiculous idea, it's not going to become more accurate if you combine it with several other ridiculous ideas.

And that even holds true if you somehow get your nutty claim into a major media outlet.

Someone should have explained all of this to Suzy Strutner, who wrote an article a few days ago for Huffington Post called "Your Birthday Could Say a LOT About What Happens In Your Home."  And we're not just talking about timing of birthday parties, here.  Strutner claims that we should all pay close attention to something called "local space astrology," which seems to combine regular old astrology with ley lines and feng shui to come up with an all-new amalgam that may rival the idea that the shape of your ass can predict your future for sheer idiocy.

Apparently, what you're supposed to do is to get a "local space chart" which identifies the positions of the Sun, Moon, and planets at the moment of your birth.  You then lay this chart over the floor plan of your house, and see which planets are where.

Because I don't see how this could work, okay?  Even if you buy the whole astrology thing, why would my "local space chart" have anything to do with my house?  I was born on a military base in Quantico, Virginia, and I currently live in upstate New York.  So at the moment of my birth, a completely different set of people lived here, who all were born in different places yet, and so on.

Plus, why should it be my "local space chart" at all?  Why not my wife's?  Or our sons'?  Or our dogs'?  Maybe Neptune being in Aquarius is why my one dog woke me up at three in the morning today.  You know, all of the business about the God of the Sea and guys pouring water out of jars made him need to pee.

But Strutner, and Kita Marie Williams, the "astrological interior designer" she consulted for this exposé, apparently don't see anything at all illogical about all this.  Strutner writes that there's a way to get around having bunches of different people in the house:


Ideally, you'd center your entire floor plan around the planets. But that's almost always impossible...  Plus, if many people live in your home, then their ideal room setup is going to be different than yours, since they have a different local space chart.  Instead, learn how the planets make each room for each person.

She gives the example of the "Mars line" being the line of "combative energy," so if your "Mars line" runs through your living room, you should watch exercise videos there, or "meditate there if you need a powerful boost."

But of course, sometimes the lines don't, um, line up so well.  Strutner tells us one example:


Of course, some planet lines may not sync well with the rooms that they intersect. This might debunk household crises like a broken computer, according to astrology expert Gloria Roca.  Roca once consulted a client whose broken computer sat near her home's Neptune line.  The machine likely broke down because Neptune represents slowness and blur, Roca says. Once her client added a photo of a serene mountain -- associated with the earthy and wise planet Saturn -- to the room, the computer started to work just fine.

Righty-o.  Someone should tell that to the people on the Geek Squad over at Best Buy.  Don't bother taking the customer's computer apart.  Just tape a photograph of a "serene mountain" to it and it'll repair itself.

Roca, Williams, and Strutner tell us that we should head off this sort of problem by decorating according to our "local space chart" right from the get-go.  A room that has a "Mars line" should have bright red walls, they tell us, to "bring forth its best energy."  Which sounds like exactly the décor I'd choose, if I was the interior designer for the Marquis de Sade. 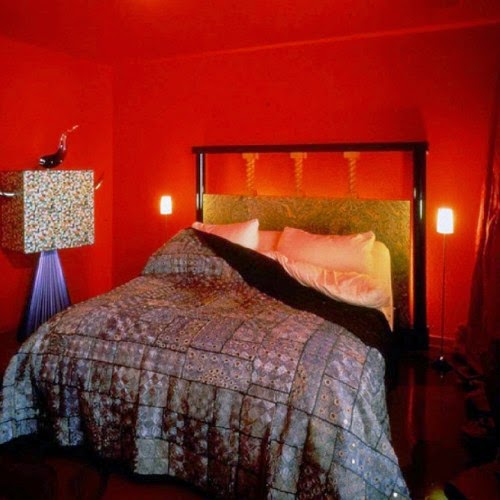 But the rest of us might choose something a little more subdued, regardless of what planet's lines run through the room.  Bookshelves are "Jupiterian," we're told, and flower bouquets are associated with Venus.  Which raises a problem; what if a room is multi-purpose?  Many of us read, sleep, watch TV, and have sex in our bedrooms.  Do we have to change the décor every time we want to switch gears?  "I'm sorry, dear, we can make love as soon as I finish repainting the walls."

So anyway.  The whole thing strikes me as ridiculous on a number of different levels.  The astrologers really should go back to telling their clients that because the Moon is in Scorpio, they're going to meet a tall, handsome stranger some time in the next two weeks, and let the ley lines and feng shui nuts do their own thing as well.  Combining them all just leads to a messy conflict of interests, and nobody wants that.

But I probably only said that because the Mercury line under my office intersects with the fifth house of Capricorn, or something.  And also because I'm a little grumpy about being up since three AM.
Posted by Gordon Bonnet at 2:29 AM