Telling an outright, bald-faced lie on a major issue should exclude you from running for public office.

Yes, I know that would exclude three-quarters of the politicians we now have in office.  But consider: why do we tolerate this sort of behavior?  Instead of saying, "You are lying," we just roll our eyes and say, 'Oh, you know politicians."  As if this is somehow on the same level as a tall tale from a five-year-old, and not an utterance that might not only hoodwink naïve members of the citizenry, but potentially fuck up smart policymaking in the process.

First, let's start with the obvious.  Since I don't work as a state employee in Wisconsin or Florida, I'm allowed to utter the words "climate change," so I will.  According to a paper released three months ago in Geophysical Research Letters, authors Daniel Griffin and Kevin J. Anchukaitis state their conclusion bluntly:


(T)he current event is the most severe drought in the last 1200 years, with single year (2014) and accumulated moisture deficits worse than any previous continuous span of dry years.  Tree ring chronologies extended through the 2014 growing season reveal that precipitation during the drought has been anomalously low but not outside the range of natural variability.  The current California drought is exceptionally severe in the context of at least the last millennium and is driven by reduced though not unprecedented precipitation and record high temperatures.

But of course, accepting climate change would be right up there with accepting evolution for anyone hoping for the Republican nomination.  So it's unsurprising that Ms. Fiorina won't come right out and say that the climatic side of the drought was triggered by anthropogenic global warming. 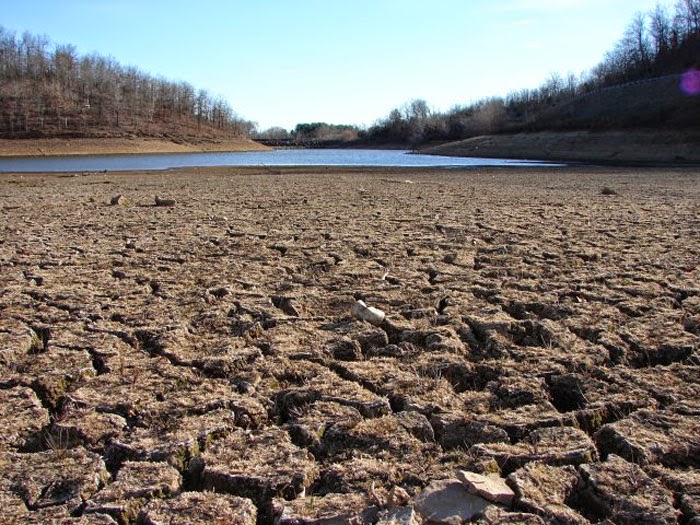 [image courtesy of the National Oceanic and Atmospheric Administration]

Because there is another side of the drought, and that's water usage.  California Governor Jerry Brown at least gave lip service to this aspect of it last week, with an order to cut back on water use by homeowners -- making it illegal to use potable water to irrigate lawns, for example, something that in my opinion should have been done thirty years ago.  Urban water districts have been ordered to reduce water consumption by 25%, although they're not giving any particular details on how to get to that target other than the lawn sprinkler ban.

What is less well-known, though, is that the water use restriction didn't touch two of California's industries: agriculture and petroleum.  Agriculture uses 80% of the state's water supply.  A full 10% goes for almonds alone.  Another 15% goes to producing alfalfa hay, a lot of which is consumed by the dairy industry.  But a study has shown that just the portion of the hay crop that is exported to land-poor countries like Japan represents a water use of 100 billion gallons per year -- enough to supply a million families with drinking water for a year.

Explain to me again, Ms. Fiorina, how liberal environmentalists caused all of this?

Then there's the petroleum industry, that according to a recent estimate uses two million gallons of fresh water a day for oil and gas production.  Included in that are the 70 million gallons of water the state used in 2014 for hydrofracking alone, water that after use is so laden with salt and toxins that it is unsuitable for use for anything else, and is often disposed of by deep-well injection, which in 2014 was demonstrated to have contaminated agricultural and drinking water aquifers in the Central Valley with arsenic, thallium, nitrates, and salt.

Find me a liberal environmentalist who had anything to do with making this practice legal.

Look, it's not like I have solutions for this problem.  The California drought is a tangled skein of climate effects (both natural and anthropogenic), mismanagement, greed, overuse, and poor planning.    Any possible answer will require some serious rethinking of how water is used and how agriculture is managed in arid climates.  Governor Brown's lawn-watering restrictions are going to have exactly zero effect, given that the vast majority of water use in California isn't by homeowners.

And Carly Fiorina's statement that the whole thing wouldn't have happened if only the damn tree-huggers had allowed the building of a couple more reservoirs is an outright lie.

But such smokescreens feed political expediency.  Simple causes imply simple solutions, and it's in the interest of Ms. Fiorina's presidential aspirations to claim that the whole thing can be fixed if only we have a business-first, environment-last leader.  So it's unsurprising, I suspect.

But expedient doesn't mean "true," and it'd be nice if some of our political leaders would acknowledge the fact.

UPDATE:  Apparently Fiorina's statement is a lie even in a more fundamental way; there have been 21 million acre-feet of reservoirs and storage added to California's water management system in the last fifty years.  See this source for details.  Thanks for a sharp-eyed and knowledgeable reader for catching this.
Posted by Gordon Bonnet at 5:16 AM