Regular readers of this blog know that besides my two hats of Skepticism Blogger and High School Science Teacher, I also wear a third one, which is Fiction Writer.  And we fiction writers are, almost without exception, a strange breed.  Discussions with other authors has turned up a commonality, a psychic quirk that I thought for a time was unique to me: our fictional characters sometimes take on a life of their own, to the point that they seem...

The result is that there are times that I feel like I'm not inventing, but recounting, stories.  The plot takes turns I never intended, the characters do things that surprise me for reasons that only later become apparent.  In my current work-in-progress, a strange, neo-mythological novel called The Fifth Day that follows Stephen King's dictum to "create sympathy for your characters, then turn the monsters loose," one of my characters has turned out to be a great deal nicer than I ever suspected he'd be.  His soft side came from a history of childhood neglect that prompts him to befriend another character, a twelve-year-old boy.  I honestly had no knowledge of this when I started the story.

Of course, that won't stop me from killing him in a few chapters.  But still, it's nice to know he's not the macho jerk he seemed to be at first.

Be that as it may, I really do (truly) know that it's me inventing the whole thing.  My books are, after all, on the "Fiction" aisle in the bookstore.  Which makes the claims of a few authors even more peculiar than the Who's-Driving-The-Car sensation I sometimes get; because these authors claim that they've actually met their characters.

Like, in real life, in flesh and blood.  According to a recent article in The Daily Grail, more than one writer has said that (s)he has been out and about, and there, large as life, has been someone from one of their stories.

Alan Moore, for example, author of the Hellblazer series, said that he ran into his character John Constantine in a London sandwich bar.  "All of a sudden, up the stairs came John Constantine," Moore said in an interview.  "He looked exactly like John Constantine.  He looked at me, stared me straight in the eyes, smiled, nodded almost conspiratorially, and then just walked off around the corner to the other part of the snack bar."

Moore considered following him, but then decided not to.  "I thought it was the safest," he said.

Graphic novel artist Dave McKean has also met a fictional character, but not one of his own; he says he's run into the character Death from Neil Gaiman's series Sandman.  Which has to have been pretty alarming, considering.

Of course, most people, myself included, chalk this up to the overactive imagination that we writers tend to have.  We picture our characters vividly, imagine the scenes in full Technicolor and Sensurround, so it's not really that surprising that sometimes we see things that make us wonder if maybe our fictional worlds have come to life.  But some people believe that this isn't a coincidence -- some chance resemblance of a person to a character in one of our stories -- but a real, literal manifestation of a fictional being into the waking world. 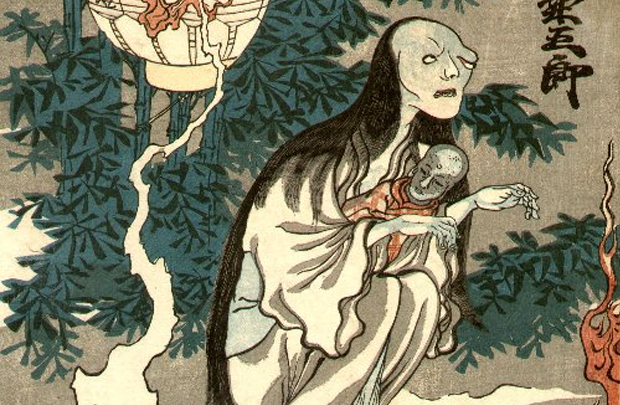 Such fiction-become-real beings even have a name.  They're called tulpas, from a Sanskrit word meaning "conjured thing."  In the western occult tradition, the idea is that through the sheer force of will, through the power that the imagined being has in our minds, it becomes real.

And not just to its creator; believers claim that a tulpa has an independent reality.  Graphic novel writer Doug Moench, in fact, says he met one face to face.  The story is recounted in Jeffrey Kripal's book Mutants and Mystics: Science Fiction, Superhero Comics, and the Paranormal, and is excerpted in The Daily Grail link I included above; but it suffices to say that Moench was writing a scene in one of his Planet of the Apes comics about a black-hooded bad guy holding a gun to the head of a character, and heard his wife call him -- and he went into the room to find a black-hooded intruder holding a gun to his wife's head.

Understandably shaken by this experience, Moench apparently went through a period where he was uncertain if he should continue writing -- because he was afraid that it would become real.

Predictably, I think what we have going on here isn't anything paranormal.  Moench's experience was almost certainly nothing more than a bizarre, and very upsetting, coincidence, and a fine example of dart-thrower's bias (think about all the millions of scenes writers have created that haven't come true).  But there's something about the tulpa thing that still gives me a bit of a shiver, even so.  There are plenty of characters I've created that I'd just as soon stay fictional, thank you very much.  (The old man in the interrogation room from my soon-to-be-released novel Kill Switch being a case in point; that sonofabitch was awful enough on the printed page.)

But there are a few characters from stories I've written that I wouldn't mind meeting.  Tyler Vaughan from Signal to Noise comes to mind, because more than one person has told me that Tyler is actually a younger version of me, and I'd like to apologize to him for saddling him with my various neuroses.  But the majority of 'em -- yeah, they can stay fictional.

So I'll take a pass on the whole tulpa thing.  For one thing, I see no possible way it could work.  For another, all the accounts of authors meeting their characters are way too easily explained by the fact that writers' skulls tend to be filled with things that I can only call waking dreams, so we're to be excused if sometimes we blur the edges of reality and fiction.

And third: I'd rather not have some of the scenes I've written come to life.  I had a hard enough time putting my characters through some of that stuff.  No way in the world would I want to live through it myself.
Posted by Gordon Bonnet at 2:08 AM