How to make yourself disappear

I've always found it intriguing how easily tricked our perceptual systems are.  Not only is this capacity for "brain failure" (as Neil deGrasse Tyson calls it) the cause of most optical illusions, it also highlights how important it is to have science as a protocol, and measuring devices to collect the data.

And yet, we still walk around with the feeling that what we're experiencing is the world as it is.  How many times have you heard people say, "I know it happened, I saw it!"?  But if you want to punch another neat hole in your confidence that your brain's view of the world is infallible, consider a piece of research just conducted by Arvid Guterstam of the Karolinska Institutet of Stockholm.

You might have heard about earlier experiments that convinced volunteers that a rubber hand was theirs, and one that extended that perception to the entire body, creating the illusion that a mannequin was actually the participant's body.  Now, Guterstam has tricked his test subjects into thinking that their body was still there -- but invisible. 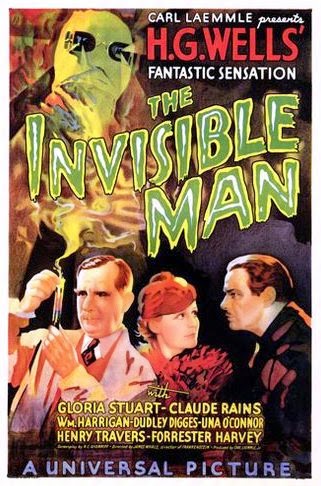 In his experiment, subjects were wearing virtual reality goggles that interfaced with a set of cameras, so that what they saw was what the camera was pointed at.  In this case, the camera was pointed at an empty space.  The experimenter and a helper then used a pair of soft brushes, and one of them stroked the volunteer's bare belly at the same time as the other, standing in the camera's field of view, stroked the air over and over in a way suggestive that there was a body there that was invisible.

If the movements of the brushes were synchronized properly, the volunteer got the distinct sensation that the camera was pointed at his/her body -- but it was completely invisible.

"We put a lot of effort into perfecting the actual brushstrokes," Guterstam said.

What is interesting is how simple the protocol was, and how convincing the illusion that resulted.  "I am very susceptible to illusions, so for me it worked," Guterstam said.  "You have a vivid sensation of having a body, but it's not directly visible.  I don't know what it would feel like to have a phantom body, but I imagine that's what it'd feel like."

The research team then performed their experiment on a group of twenty test subjects.  75% reported feeling a powerful illusion of invisibility.  "Most were surprised, and some started giggling.  It's a very unnatural, unexpected experience," Guterstam said.  "It's the first time that anyone has shown that you can embody a full invisible body."

If it's hard to believe that your brain could be so easily tricked into accepting such a bizarre view of its own body, Guterstam agrees. "The invisible body illusion is definitely pushing the boundaries of what the brain can accept as part of the bodily self," he said. "(But) it tells us that body representation in the brain is even more malleable than previously thought."

Guterstam, being a neuropsychologist, immediately thought of clinical applications of this malleability.  I, not being a neuropsychologist, immediately thought of how we could turn this into virtual reality for entertainment purposes.  If a digital camera and a pair of brushes are all that's needed to twist our perceptions of reality in such a fundamental way, how much more would it take to drop a person into a completely invented world, in which we could interact and perform in ways not limited by our actual physical capabilities?

I know some of my readers are probably appalled by all this -- the idea that our mental abilities are so unreliable, so easily fooled.  Myself, I think it's kind of cool.  For one thing, I never had that much confidence in my own brain to begin with.  I've always recognized the shifting sands on which my consciousness rests, dependent as it is on my moods, focus, and level of fatigue, and even such factors as whether I've eaten lunch or had my required two cups of coffee or just caught a glimpse of an attractive and scantily-clad woman.  Now, we might be able to harness this plasticity to expand our own perception into realms that were previously inaccessible, using our capacity for "brain failures" to experience things our real perception never could.

How awesome is that?
Posted by Gordon Bonnet at 3:07 AM