Yesterday, on an island in Indonesia, at midnight local time and 1 PM Eastern Standard Time, eight men were brought out into a wooded grove one at a time and were executed by a firing squad.  Each one was given the choice of whether to sit or stand, and to have a hood, a blindfold, or nothing at all.  All eight chose nothing, and to look the members of the firing squad in the eye as they died.  Three of the eight executioners had live ammo in their guns; the other five had blanks.  No one knew which guns were which.

When the prisoner was ready, the firing squad took aim at the man's heart.  The command to fire was given, and seconds later, the condemned man was dead.

The crime the eight committed was possession of drugs with the intent to distribute.  Two were members of the infamous "Bali 9" drug trafficking ring.  Each had been caught entering the country with heroin or cocaine.  Four of the men were from Nigeria, two from Australia, one from Brazil, and one from Indonesia. 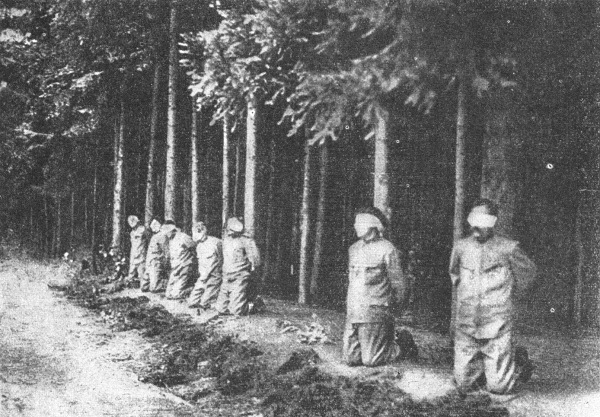 Most, if not all, of the men had experienced significant personal changes during their four-year stay in prison, while their cases dragged through appeal after appeal.  One, Australian Myuran Sukumaran, spent his time painting; his final paintings were of a heart, and a haunting self-portrait with a black hole in the center of the chest.  The other Australian, Andrew Chan, and one of the Nigerians, Okwudili Ayotanze, became well known for offering solace and counsel to their fellow prisoners.  All appeared completely repentant for what they had done.

Further complicating matters, the Brazilian, Rodrigo Gularte, was a diagnosed schizophrenic, who thought animals could talk back to him and believed that electromagnetic waves were controlling his behavior.

The whole thing brings up a lot of questions about why the judicial system works as it does.  Why do we imprison, and in some cases execute, people who have broken the law?  It seems to me that there are three answers to this question -- and they lead to different answers regarding how we should treat criminal cases.

The first is that justice is retributive.  Some of the oldest known codes of law, such as the Code of Hammurabi, are retributive in nature.  If you cause someone to lose a hand, you should lose your hand.  The basic logic is payback; "you deserved everything you got."

The second is to protect society.  By this standard, two people who commit the same crime should be treated differently depending on how much of a subsequent threat each one represents.  And this is considered in sentencing, at least in the United States; someone who is likely to commit further crimes is often given a harsher sentence.

The third is to set an example.  "See what happened?" this standard says.  "You don't want this to happen to you."  It was for this reason that floggings and executions used to be conducted in public, often in the middle of the town square.  Such events were often widely attended, as peculiar as that may seem to modern sensibilities.  The last public hanging in the United States, of rapist/murderer Rainey Bethea, was attended by 20,000, and was such a media circus that the decision was made to conduct executions behind closed doors from then on.

All of which demands that we consider how to deal with cases of serious crimes.  What the eight men  did was terrible; heroin and cocaine are horrible chemicals that destroy lives.  From the standpoint of retribution, the sentence was fair.  And the publicity surrounding the case certainly should act as a deterrent; no one could fail to be moved by the photographs of the hysterical family members of the executed men, and it's hard to imagine anyone considering bringing drugs into Indonesia not being given pause.

But there are still questions.  If the idea of justice is to safeguard society, the focus should be on rehabilitation, not retribution.  From what I've read, certainly Chan and Sukumaran were rehabilitated, and not only would have been unlikely to do anything of the sort again, but might well have been powerful spokesmen against the illegal drug trade.  Apparently a change of heart is what saved Malaysian drug trafficker Yong Vui Kong from being hanged in Singapore; his sentence was changed to life in prison and fifteen strokes of the cane because he had "seen the error of his ways and had repented."

As far as rehabilitation goes, however, you have to wonder how effective that usually is even in non-capital cases.  Recidivism rates are sky-high.  A study by the National Institute of Justice of over 404,000 prisoners in the United States found that 76.6% of them were re-arrested within five years, over half of those arrests occurring within the first year after release.

Add to this the fact that the execution of drug traffickers has barely put a dent in the Southeast Asian drug trade; the region is the second biggest producer of heroin in the world (after Afghanistan).  And the people most often caught are the couriers, who are usually young, poor, and desperate.  The kingpins, the ones who are controlling the operations and getting rich from the profits, are seldom ever brought to justice.

None of that mattered.  Indonesian President Joko Widodo said from the beginning that there would be no clemency granted.  And there wasn't.

I'm not sure why this case resonated so strongly with me.  I was fairly certain what the outcome would be, so it wasn't over any particular curiosity over what would happen.  I think it may have been the personal angle -- I read articles containing interviews with Chan's girlfriend, whom he married a few months ago while he was already in prison.  I saw galleries of Sukumaran's paintings.  I read the statements by the lawyers of the eight prisoners and the pleas by leaders of their home countries to spare them.  I thought about the ethics of executing someone like Rodrigo Gularte, who had a serious mental illness.

And yesterday, while I was teaching my Critical Thinking class, eight men halfway around the world were shot through the heart.  In the final analysis, I have no real idea whether this was just or unjust, ethical or unethical.  Nor can I decide whether President Widodo should have considered any other factors in his decision to allow the executions to proceed.

All I can say is that I'm glad that I will never be in a position to make such a judgment.
Posted by Gordon Bonnet at 2:57 AM