The derp is strong with this one

Now we have people believing that people time-traveled backwards (or forwards; sources differ on that point) from the Galaxy Far Far Away, all for the purposes of including Master Yoda in a medieval manuscript.

First the facts, okay?  There's a 14th century manuscript called the Smithfield Decretals, which are some of the expositions of Pope Gregory IX on points of canon law, written in France and then brought to England and illuminated.  It currently resides in the British Library, and its graceful calligraphy and odd illustrations are what prompted a use of one of the images from it in a newspaper interview with Julian Harrison, the Library's curator of pre-1600 manuscripts.  Interestingly, Harrison has quite a following; his blog, Medieval Manuscripts,  gets an average of 36,000 hits a day, and his Twitter feed has over 24,000 followers.

Who knew the Medieval Period had so many fans?

But anyway, Harrison made an offhand comment in one of his posts about the image of Yoda in the Smithfield Decretals, and it got picked up in the interview.  So, without further ado, let's take a look: 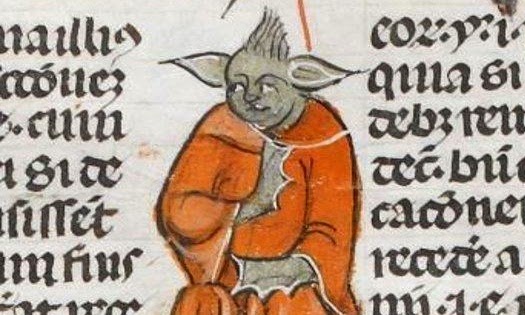 Other than the fact that his expression is not so much "wise Jedi master" as it is "derpy and confused," I think we can agree that this is quite a match, yes?

Apparently, so do the woo-woos.  This thing has been popping up all over on sites like Mysterious Universe and CosmosTV, prompting thousands of people to comment.  And while some of them are undoubtedly posted for the humor value, I'd say a good 3/4 of them have the ring of truth.  Here's a sampler.  (Spelling and grammar are as written, so you can get the full effect):

Yes, of course!  Wierd real Yodas!  Intersecting universes and the Force because of quantum mechanics!  Ha ha!  Please tell me you people don't know where I live!

And learn some critical thinking skills, they should.

Anyhow.  I'm always amazed at how little it takes to set these people off.  And, of course, given that the trailer for the next installment of the Star Wars saga was just released, and has been inducing multiple orgasms in the crowd who (1) wanted to become a tie-fighter pilot, (2) dreamed about owning a light saber, (3) had the hots for Luke and/or Leia, and (4) went into a prolonged period of mourning when Obi-Wan died, I suppose it's not going to die down any time soon.

And honestly, I have to admit that I'd take Yoda over Sauron and the Elder Gods, if I had the choice.
Posted by Gordon Bonnet at 3:49 AM