I love science, and am delighted with the progress we've made in understanding the universe.  This has come along with a lightning-fast improvement in the quality of our technology, and although most of my friends consider me a Luddite, I'm actually in favor of that, too.

However, there are times when our technology gets ahead of our good sense.  When, in fact, it becomes apparent that in some ways, our devices are smarter than we are.  And one of those instances has to do with the geographical close-mapping project, Google Earth.

As our ability to create detailed aerial photographic maps of our planet has improved, so has our knowledge about places that are inaccessible to conventional human exploration.  But the problem is, the photographs are becoming detailed enough that we're falling prey to our perceptual biases, and coming up with some pretty wacky explanations for what we're seeing.  Here are a few examples:

So you can see that we don't have a very good track record of interpreting what Google Earth is finding.  Add to that all of the misidentifications made by people pawing through NASA photographs from Mars (where various wingnuts have found "evidence" of a thigh bone, a flip-flop, a skull, a fossilized gopher, and a vicious-looking Martian bunny), and it's understandable that I'm not ready to lend much credence to the latest "discovery"...

... which is a crashed spaceship in Antarctica.

The UFO enthusiasts are leaping about making excited little squeaking noises over an image from the West Antarctic Ice Sheet, more specifically from 80°34’08.4″S 30°05’19.3″W, which showed the following: 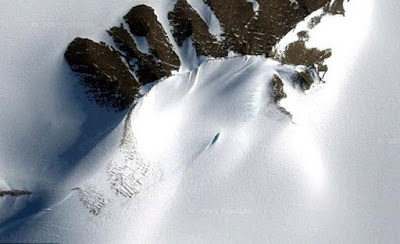 See that diagonal mark in the middle of the image?  That, we find out, is no geographic feature.

It's a downed spaceship.

What evidence do they have?  Well, you're looking at it.  Everything else is just taking the above image, magnifying it until it gets really blurry, and finding bits of that blurred image that look like metallic reflections or spacecraft windows or hatches or whatever.  Next thing you know, they'll be claiming that this is rising up out of the snow:

As long as no one expects me to get on my Tauntaun and ride out to investigate.  I'm not taking a chance of freezing my ass off and then having to get shoved inside some smelly animal's abdominal cavity just in order to survive, all in the name of exploration.

But the guy who discovered the image, Russian UFO hunter Valentin Degterev, is adamant that we doubters are wrong. "I think there is very large disc-shaped flying machine amongst the frozen ice," Degterev said.  "It is definitely not a polar station, nor a plane (as there aren’t any airplanes or helicopters this big in the world).  There also aren’t any ships lost in Antarctica. It seems this is an artificial object from the distant cosmos."

Because, apparently, that's the only other option.  British UFO hunter Nigel Watson thought Degterev was spot-on, however. "It’s hard to tell if this ‘classic’ saucer sticking out of the ice, or whether it is a break in the ice," Watson said.  "Antarctica has a long tradition of being the resting place of crashed saucers or a base for their operations."

How convenient, given that Antarctica is so inaccessible to conventional exploration -- and verification of your claims.

Pretty sneaky guys, those aliens.  Never crash-landing their saucers in places that are thickly inhabited.  Can't you see the discussion, as the ship is going down?

Alien 1:  "Our guidance system is failing!  The inertial dampers are offline!  We're going to crash!"

Alien 2:  "No!  We can't crash here!  We're over Newark, New Jersey!  If we crashed here, then everyone would find out about our existence!  We can't have that!"

Alien 1:  "I have it!  We'll stay aloft for another ten thousand kilometers, and then dive headfirst into an ice sheet in Antarctica."

So if the mark on the ground in the West Antarctic Ice Sheet isn't an alien spaceship, nor an Imperial Probe Droid, what is it?

The movement of glaciers frequently opens up cracks, and the overlying snow cover collapses inwards, forming a slot-like hole.  (Sometimes it takes a while for the snow cover to fall, which is why hiking over glaciers is so dangerous -- what looks like solid ice can be a thin crust of snow over a hundred-foot-deep plunge.)

So sorry to burst your bubble, UFOlogists, but if you're looking for the smoking gun, alien-wise, this isn't it.  Just as the Chinese lines weren't a mock-up of Washington, DC, the seafloor anomaly wasn't Atlantis, and the star wasn't an Illuminati summer camp, this isn't a downed spaceship.  You'll just have to keep looking.

Back to scanning Google Earth images.  Make sure to tell us what you find.  As long as it isn't vicious alien bunnies.  If you find one of those, I'd rather not know.
Posted by Gordon Bonnet at 1:33 AM