What do you know about diphtheria?

If you're like most of us, you probably know it's one of those bad childhood diseases pretty much no one gets any more, and that it is the "D" in the DPT shot.  That's about it.

So let me tell you more about diphtheria.  You'll see why in a minute.

According to the Mayo Clinic, diphtheria is a "serious bacterial infection of the mucous membranes of the nose and throat."  The most definitive symptom is a "layer of thick grayish material" across the back of the throat -- in fact, the name of the disease comes from the Greek word διφθέρα, meaning "leather" -- which can completely block the airway and cause the victim to suffocate.

That's not all, however.  The disease can affect the skin, causing deep, painful, silver-dollar-sized ulcers.  Patients run a high fever, with all of the accompanying misery.  The toxin produced by the bacteria can damage the heart, liver, and kidneys, so even with treatment, some sufferers are left with permanent debility.  Prior to vaccination, the epidemics it caused were devastating; repeated outbreaks in the United States in the 1920s caused an average of 14,000 deaths per year, mostly among children under the age of ten.  An epidemic in 1613 in Spain was so dreadful that it was called "El Año de los Garrotillos" -- "the year of strangulations."

Have I made the picture vivid enough? 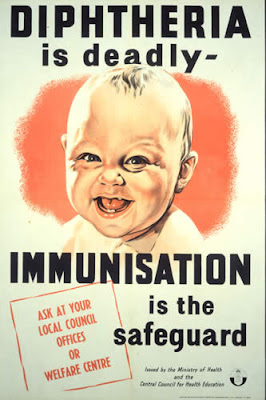 The reason I bring this up is that a six-year-old child from the city of Olot in Catalonia, Spain is currently in the intensive care unit in a hospital in Barcelona because he contracted diphtheria.  It's the country's first case since 1986, which is why doctors have had to initiate a worldwide search for sufficient quantities of the antitoxin to treat the boy's symptoms.  It wasn't on hand in any hospital in Spain, because no one gets the disease there any more.

Because of the vaccine, remember?

But the child's parents are anti-vaxxers.  They elected not to have their son vaccinated against this completely preventable disease, despite (1) the vaccine's demonstrated effectiveness, safety, and nearly 100% freedom from side effects, (2) the known deadliness of the disease, and (3) Spain's policy of offering free vaccination to anyone.  They preferred to put their child at risk for illness, and potential long-term debility or death, because of their belief in fear mongering and conspiracy theories and discredited studies linking vaccines to autism and autoimmune disease.

I'm a pretty tolerant guy, most of the time.  But I think these parents should be prosecuted for child endangerment.  They are no more responsible parents than the people who watched their 17-year-old son die in agony from appendicitis because they believed in the power of faith healers, and the people who let their sixteen-month-old son die from bacterial meningitis because their religion forbade them to seek conventional medical treatment.

All of these stem from a trust in non-scientific foolishness strong enough to put a child's life in danger.  I fail to see how they differ.

The fact that enough parents have been swayed by the fear talk is why California recently passed a bill to end personal opt-out provisions for vaccinations.  Supporters, such as Senator Richard Pan (D-Sacramento) -- who was a pediatrician before he went into politics -- put it succinctly: "Vaccines are necessary to protect us.  That protection has been eroding.  The science is clear: Vaccines are safe and efficacious."

If you needed further illustration of that, consider the outbreak of measles -- another dangerous, and entirely preventable, disease -- last year that sickened 169 people in eight states between December 2014 and March 2015, and which was traced back to unvaccinated children who had visited Disneyland.

It's a shame when the government has to step in to protect children from their parents' ignorance and superstitiousness, but that's what's needed here.  If you want to put your own life at risk -- fine.  If you'd rather let yourself die of a treatable or preventable disease because you think it's against god's will to go to the hospital, or because you're so fearful of conventional medical treatment that you'd rather the alternative, that's your choice.  I might think you're being ridiculous, but there's no reason to prevent you from making that choice for yourself.

But when you start making dangerous and irresponsible choices for your children, that crosses the line into child endangerment.  At that point, there should be a legal way to step in and stop you from putting the life of an innocent young person at risk.
Posted by Gordon Bonnet at 2:35 AM