I spend a lot of time, here at Skeptophilia, railing at unscientific, irrational views of the world.  Today, I'd like to celebrate a major accomplishment of humanity: this morning, virtually as I'm writing this, the NASA spacecraft New Horizons is making the closest-ever pass of a spacecraft to Pluto.

The magnitude of this feat isn't obvious at first.  Pluto is a small target -- its radius is estimated at about 1,180 kilometers -- and it's so far away that it's hard to picture.  Pluto's average distance from the sun is about 6,000,000,000 kilometers, although its orbit is so eccentric that it varies from a perihelion of 4.4 billion to an aphelion of 7.3 billion kilometers.  So how amazing a feat is this?

Thus far, the information that has been coming back has been breathtaking.  Already we have seen that the surface of the planet is rusty-red in color and has a pattern on its surface shaped like a heart; that it seems to have ice caps of some sort; and that on its surface is a mysterious dark formation that's been nicknamed "The Whale," whose structure is as yet undetermined  We stand to learn more about Pluto's composition and history, and the characteristics of its moon Charon -- which, at a radius of about 630 km, is over half as big as the planet itself.  (In fact, astronomer Neil deGrasse Tyson tweeted this weekend, "Pluto’s primary moon Charon is so large that their mutual center-of-mass lies not within Pluto but in empty space.") 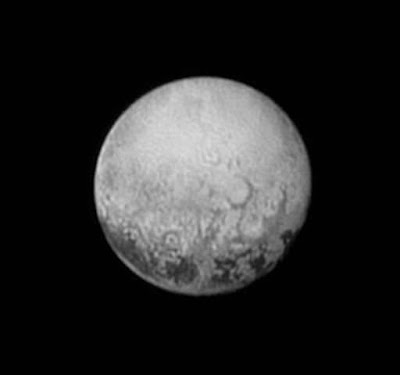 But even tiny Pluto -- one-sixth the mass of the Earth's Moon, and one-third its volume -- has four other moons.  They've been named Styx, Nix, Kerberos, Hydra, after other denizens of the Greek underworld (Charon, you'll remember, is the ferryman who brings dead souls across the River Styx).  Its surface seems to be made predominantly of various kinds of ice, including frozen nitrogen, methane, and carbon monoxide.  It's lightweight for its size -- its density is only about 2 grams per cubic centimeter, only twice the density of liquid water -- leading astronomers to conjecture that it has a rocky core, and a mantle composed primarily of liquid water and water ice.  If this is correct, Pluto may have the highest percentage composition of water of any object in the Solar System. 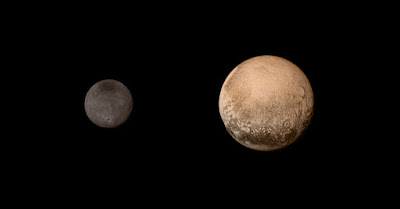 And the fun won't end with its closest pass this morning.  The probe is designed to keep sending back data for another sixteen months.  After that, it will continue sailing out of the Solar System, following Voyager 1, which was launched in 1977, and now zooming out into interstellar space, some 12 billion kilometers away.

Some naysayers -- and there are more than you'd think -- have asked why we put time, effort, and (lots of) money into such endeavors.  So we find out the composition of a celestial body five-some-odd billion kilometers away from us.  So what?  What good does it do us?

I think the reason is that knowledge, in and of itself, is a worthy goal.  Always looking at the profit motive -- what benefit will it bring? -- is ignoring the fact that the inspiration gained from reaching for, and achieving, a lofty goal has a worth that can't be measured in dollars.  How many young minds were inspired by previous successes in pure science -- the discovery of how DNA works, the first humans to reach the Moon, the uncovering of countless bizarre fossil animals by paleontologists, the first manned submarine to descend into the Marianas Trench?

And what did those minds go on to accomplish?

I look at the images coming back from New Horizons with nothing but a sense of wonder and curiosity.  Such missions represent one of humanity's most fundamental drives; the thirst for knowledge.  So when you see the images that are coming back from the furthest reaches of the Solar System, don't just think of them as pictures of a distant denizen of our Solar System.  Think of them as symbols of the highest aspirations of the human mind and spirit.
Posted by Gordon Bonnet at 4:47 AM