People are already saying that NASA is faking the images from Pluto.

Yes, I know.  The question of "Why would they do that?" appears to be unanswerable.  But as we've seen before, there is nothing that is so completely idiotic that there won't be conspiracy theorists who think it's true.

First we've got YouTuber Crow777, who has put together a video calling NASA out on their shenanigans.  As proof, he shows a photograph of Jupiter he took from right here on Earth with his own telescope, and then a fuzzy photograph of Pluto from the New Horizons probe.  "If this is all real," he says, "why can I get a clearer image of Jupiter in my backyard at four hundred million miles than NASA can get of Pluto at nine million miles?... Now this is just an insult to your intelligence."

Let's start with the fact that (1) Jupiter is bigger, (2) Pluto is much further from the Sun and therefore reflects less light to a camera regardless where you are taking the picture from, and (3) they did get much clearer pictures than the one that Crow777 used for his comparison.  But those were all faked, too, apparently.  How do you know that?  Because they are.  Stop asking questions. 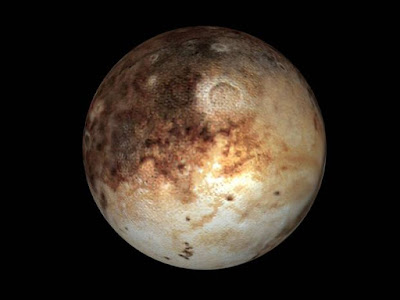 And Crow777 is not just a lone wacko.  Well, maybe that's not true; he's a lone wacko, but there are many like-minded lone wackos out there.  Twitter erupted with tweets under the hashtag #NASAHoax like the following:


Pluto? You all having fun with this fake cgi pic !!! #NASA #NASAHoax biggest lie in history!!!!! #WakeUpAmerica they lied about that to

Lmao so their other fake as hell satellite is able to take a photo of the #pluto inbound satellite. #gullible much? #NASAHoax

TOO BAD ALL #NASA MISSIONS ARE FAKE HOAX.............. #PLUTO DON'T BELIEVE THE HOLOGRAMS , AT LEAST STAY CONSISTENT WITH THE IMAGES SMH #NASAHoax

Then we have a whole different sort of crazy over at Scam.com, courtesy of a poster going by the handle TruthIsNeverTooHorrible.  And Mr. Horrible has the following to say:


To get this mockery of the "space travel" simulated reality to terminate the show:
Pluto was the first celestial body created by the illuminati, decades before the creation of the space travel hoax, as exposed first by Last Prophet...

Any celestial body that can not be observed with a telescope located ON Earth, is fake.  This one basic fact implies that for instance Pluto (the first example among millions) is an invention created by the illuminati.

And in the "Insanity Creates Odd Bedfellows" department, the Pluto Truthers here in the United States got some unexpected support... from hardline Muslims in Malaysia.  Apparently the consensus over there amongst the extremely devout is that the NASA photographs are "poyo" -- the Malay word for "stupid."  The images of Pluto, they said, were created using a green screen.  (Because green screening an image, and then replacing the green with black, makes ever so much sense.)  One poster on the Malay Daily Facebook page went on a lengthy tirade about how the Quran explains everything you need to know about space, including the fact that the sky has seven layers "guarded by angels who do not eat or sleep," thus making space travel impossible.

And also proving that it's not just here in the United States that we have people who would like to see ignorant superstition based on a holy book controlling science education.

Other pious Malaysians stated that it's impossible that the United States achieved this given that Russia and China are so much further ahead of us technologically and they haven't gone to Pluto, and that travel to Pluto is impossible anyhow because it's ten thousand light years away.

The news from Southeast Asia isn't all dismal, however.  The scientifically-minded countered with arguments demonstrating that the aforementioned loons are wrong.  Not that they'll do much good, given our track record for success in arguing with creationists over here in the States.  "This is why we can't be a developed country," lamented one Malaysian, while another put it more succinctly:  "RIP, brain."

But maybe NASA didn't invent the images of Pluto.  Maybe they're real... and they're still covering stuff up.  Like alien bases and buildings and stuff.  "We have discovered something shocking on the heart-shaped ice cap on the north of Pluto," says YouTuber UFOUnionTV.  "It looks very much like an alien base...  There is a perfectly-shaped building, and a road leading to this base...  The shadows have edges, they aren't round...  This is completely explained by this structure being artificial."

As further proof, let's go to the scientific texts written by H. P. Lovecraft about the planet Yuggoth, which supposedly orbited the Sun beyond the orbit of Neptune:


Yuggoth... is a strange dark orb at the very rim of our solar system...  There are mighty cities on Yuggoth—great tiers of terraced towers built of black stone...  The sun shines there no brighter than a star, but the beings need no light.  They have other subtler senses, and put no windows in their great houses and temples...  The black rivers of pitch that flow under those mysterious cyclopean bridges—things built by some elder race extinct and forgotten before the beings came to Yuggoth from the ultimate voids—ought to be enough to make any man a Dante or Poe if he can keep sane long enough to tell what he has seen...

So there you are, then.

You know, I wonder if back in the day there were people who thought like this.  When the first photographs of Jupiter and Saturn and so on were taken in the late 19th century, did people say, "No, those are faked!"  I mean, you can see Jupiter and Saturn with the naked eye, and see some details even with a good set of binoculars... but remember that there are people who think that the Moon is a hologram.

There probably were, but my guess is that they were laughed into oblivion.  One of the downsides of the internet is that anyone who has a computer can launch a website or a YouTube channel, and it puts everyone on an equal footing, access-wise (although hardly credibility-wise).  And given that there are folks out there for whom "I saw it on the internet" constitutes proof, it's not to be wondered at that the crazy stuff spreads a lot faster today than it did a hundred years ago.

But I live in hope that the same forces that spread bullshit like wildfire are also giving people better access to science than they've ever had before.  The availability of knowledge, free (or nearly so), to everyone -- this is also a new thing.  All we need to assure is that people have the critical thinking skills to sift the wheat from the chaff, the science from the nonsense, the Pluto from the...