Last Thursday we hit a milestone and I didn't even realize it at the time.

It's called Earth Overshoot Day, and it's nothing to celebrate.  It's the point in the year that the human population of the Earth's use of resources outstrips the total resource production for that year.  In other words, it's the point at which we go into deficit spending.

According to environmental scientists, this date has been creeping upwards ever since it was first estimated, back in the 1970s.  This year it was the earliest ever -- August 13.  Even more troubling is when you consider individual countries' overshoot points, and find out that the United States' rate of use passed its capacity for production over a month ago, on July 14.

What bothers me most about this -- besides the obvious fact that such behavior can't continue forever -- is how oblivious to it most people are.  We go on using resources as if they were infinite, wasting vast amounts of materials and energy because of careless practice or outright laziness, and still have an entitled sense that we should be able to keep doing this as long as we want, that throwing the world away after one bite is some kind of god-given right.

A lot of this here in the United States comes, I think, from living in a country that is resource-rich and still has a lot of open space.  For most of our history, we did have a vast amount of material wealth, far more (it seemed) than we could ever spend.  This attitude engendered a wildly reckless attitude that is exemplified by our treatment of the Passenger Pigeon, a bird that used to be the single most common bird species in North America -- yes, more common than starlings, robins, or crows are today.  19th century accounts describe the skies as being darkened for hours as immense flocks of a million or more birds flew over.  Yet within less than fifty years of those awe-inspiring sightings, the Passenger Pigeon was extinct.  The last member of the species, a female nicknamed Martha, died in the Cincinnati Zoo in 1914.

How could this happen?  Simple: overhunting and habitat loss.  Millions of birds could be trapped from one flock in a single day using a device called a tunnel net.  Professional hunters shot pigeons in quantities that boggle the mind; records show that at one nesting site in Petoskey, Michigan, fifty thousand birds were killed each day for over five months.  Yet it wasn't until the species had dropped below the sinister threshold called the "minimum viable population" that anyone said, "Wait a minute.  This can't continue."

Even considering this, only one of many examples of over-exploitation that resulted in a disaster, we still have the attitude that the Earth has an infinite capacity to support our every whim.  Americans get an average of 41 pounds of junk mail per person per year, 44% of which goes to landfills unopened, at a cost of millions of trees.  Simultaneously, most of us shrug off efforts to promote recycling.  Planned phase-out of incandescent light bulbs -- a device that wastes 95% of the electricity passing through it as heat -- are met with outcries against an "interference with the free market."

We have the right to use everything up, dammit.  Don't get in the way of our conspicuous consumption.  Somehow, the Earth will manage to keep up. 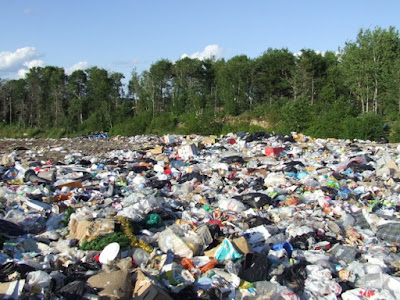 After all, we can't be expected to change our habits, right?

This attitude of entitlement runs deep in our cultural consciousness.  It's right there in the first chapter of Genesis, isn't it?


God blessed them; and God said to them, "Be fruitful and multiply, and fill the earth, and subdue it; and rule over the fish of the sea and over the birds of the sky and over every living thing that moves on the earth."  Then God said, "Behold, I have given you every plant yielding seed that is on the surface of all the earth, and every tree which has fruit yielding seed; it shall be food for you; and to every beast of the earth and to every bird of the sky and to every thing that moves on the earth which has life, I have given every green plant for food"; and it was so.

A pity we don't pay less attention to this mandate, and more to ones like "Love your neighbor as yourself."

At some point, however, this attitude is going to change, or circumstances will change it for us.  As our government has proven over and over, you can't engage in deficit spending without there being a bill to pay at some point.  We can either take the overshoot phenomenon seriously, now -- or we will face some seriously unpleasant consequences eventually.

But for a lot of people, "eventually" isn't sufficient motivation.  It's not enough that simple economic logic dictates that such behavior can't continue; the fact that we're not now in a worldwide disaster makes it easy to ignore the inevitable one that will follow if we don't change our ways.  All too easy to keep going with our comfortable, shop-till-you-drop lifestyle, and figure that when the time comes to pay up, we'll manage somehow.

Which explains not only our own behavior, but our continual election of leaders whose attitude is "Environmental problems?  What environmental problems?"  Which honestly could be better summed up as, "Wow, nasty leak!  I'm sure glad it's not at our end of the boat!"
Posted by Gordon Bonnet at 2:08 AM