Allahu akbar!... or maybe not.

Once again, the fervently religious of our world have shown themselves capable of following the Red Queen's dictum of holding several contradictory thoughts in their heads at once.  In this case, it's Egyptian Muslims, who have jailed yet another person for "blasphemy" and "criticizing Islam."

The radical Muslim element in Egypt has been quick to speak out against the sentence.  It was too lenient, they say -- the man should have been executed.

It's a little perplexing how these folks, and their spiritual brethren the Fundamentalist Christians, can't see the contradiction implicit in their stance.  On the one hand, they are continuously chanting, singing, and shouting from the rooftops about how God is Great and All-Powerful and Omnipotent and Omniscient and Omnipresent and Omni-Various-Other-Stuff, and on the other hand they are so terrified that a brief passage written by a guy on Facebook will destroy Allah's kingdom on earth that they are ready to hang him from the nearest flagpole. 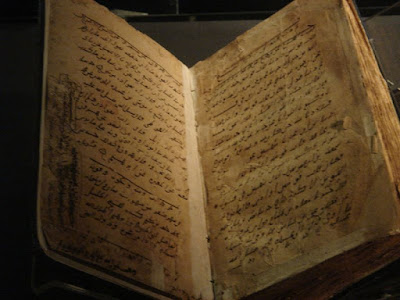 [image courtesy of photographer David Lisbona and the Wikimedia Commons]

The same was true of the witch-hunters in the 17th century, who seemed to believe that the unshakable, self-evident, rock-solid truth of god's word was under serious threat from illiterate, eccentric little old ladies.

Come on, people.  You can't have it both ways.  Either god is powerful, or he's not.  If he's powerful, you have no reason to persecute people for bad-mouthing him; presumably god is capable of handling his own battles, and doesn't need patriarchal, humorless, puritanical bastards like the Shari'a judges to deal with his enemies.  If he's not so powerful -- if, in fact, his revealed truth could be demolished by a couple of paragraphs of mild criticism -- then I have to wonder why you think he's worthy of worship.  Either way, both can't be true simultaneously.

Oh, wait, perhaps there's a third option?  Maybe all of this stuff was made up by power-hungry patriarchs to keep the power structure intact, the money flowing in, and the women in line, and in actuality there is no god!  Gotta wonder.

In any case, you also have to wonder why so few people are willing to stand up and say this. Lots of folks are willing to address the human rights aspects (torturing and executing people isn't nice) but very few people are willing to deal with the larger issue, which is that these people are morally bankrupt.  A religion or a system of ethics which is based upon coercion (mental or physical), is simply an excuse for the powerful to remain powerful.  It isn't true, it isn't worthy of respect, and it isn't a reflection of the divine.  It is simply an embodiment of all that is bad about human nature -- the desire to dominate solely because we're in a position where we can.

It's the same with a lot of the issues between the Christians and politicians these days, isn't it?  You hear from people who aren't happy that the Supreme Court legalized gay marriage that heterosexual marriage is "under attack".  The ranting you hear from the pulpits seems to claim that now that gay marriage is legal, all of these straight people are going to run right out and tie the knot with someone of the same sex, and that will open the door for heaven knows what.  In a year or two we'll probably have people marrying various marine invertebrates.  You know, if you think that sexual preference is really that fluid, you have to question why your god would have made it that way.  Or maybe it has something to do with the fact that if your worldview is based upon fear, then any amount of rationality won't get in the way of your adopting moronic stances to shore up your beliefs.

Of course, some people believe that there's god's evil twin, Satan or Lucifer or whatever, who is actively trying to corrupt people by using others to spread wrong belief.  Even if you think that's true, however, isn't it still supposedly the case that god is stronger than Satan, and correct beliefs are inherently more attractive and virtuous than incorrect ones?  If so, then once again, what the hell are you so worried about?

So once more, we have the devoutly religious of the world adopting a stance which is so patently ridiculous that if it were fiction, no one would believe it was plausible; and most of the world's political leaders doing nothing but tsk-tsking in their direction for "not being nice."  It would be wonderful if one, just one, of them would stand up and say, "You know what, Egyptian leaders?  We are no longer in the Middle Ages.  We stopped burning witches three hundred years ago.  That's because doing that sort of thing was based upon stupid, backward superstition.  Grow up, you idiotic bastards, and join the 21st century.  If criticism is really such a threat to your beliefs, it probably means that your beliefs are simply wrong."

But no one will, of course.
Posted by Gordon Bonnet at 2:24 AM