Can I plead with you on bended knee about something?

Will you all promise that if you forward something, or post it on Facebook or Twitter, you'll do three minutes of research and figure out if what you're sending along is correct?

Because I'm sick unto death of seeing stuff like this over and over: 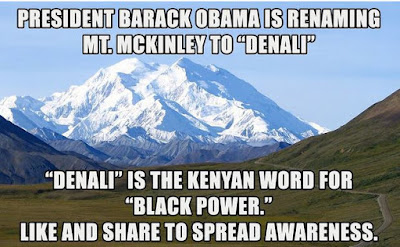 Look, we get it, okay?  You hate President Obama.  If President Obama simultaneously figured out how to erase the national debt, end all war, and cure cancer, you'd complain that he had only done it to distract you from the fact that he failed to stop the Benghazi attack in 2012 that killed four Americans.

But you are not helping your case any by lying.  Let's start with the fact that there is no "Kenyan language"; there are 68 languages spoken in Kenya, of which Swahili, Kikuyu, Kalenjin, and Kamba are the most common.  "Denali" comes from the Koyukon Athabaskan language of (Guess where?  You'll never guess) Alaska, from a word that means "high" or "tall."  The Swahili words for "black" and "power" are "nyeusi" and "nguvu;" in Kikuyu it's "iru" and "thitma;" in Kalenjin, "oosek" and "lugumek;" and so on.

Do you see anything that looks the least bit like "Denali" in there?

Then there's this thing, that has been circulated so much that it makes me want to scream: 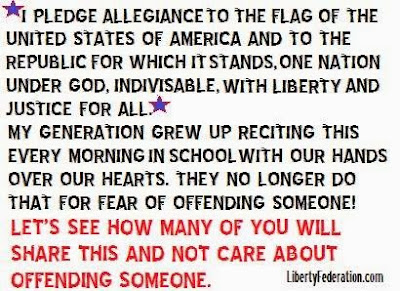 I started out responding every time I saw this with, "Oh, you mean like we still do in damn near every school in America?", but I've seen it so many times that I've kind of given up.  It would take you less than the aforementioned three minutes -- something like fifteen seconds, even with a slow connection -- to verify that the Pledge is still recited in every public school in the United States, and a great many private ones, every single morning.  But the people who this one appeals to seem to be unhappy if they're not embattled, so it's much easier to thump their chests and say, "Let me pass along something that conforms to my preconceived notions of how the world is!  That's how staunchly 'Murikan I am!" than it is to find out if what they're angry about is actually true.

But it's not only the conservatives that do this.  How about this one? 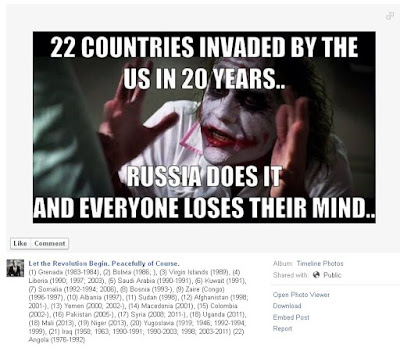 This one circulated around the channels of "Everything the US Does Sucks" for ages.  You'd think that it'd be easy enough to check -- after all, whoever created this image kindly listed all of the countries we allegedly invaded -- but again, it's easier just to get outraged and say, "hell yes!" and post it to your Facebook than it is to see if it's true.

Turns out, some political scientists fact-checked the list, and by the generally accepted definition of "invasion," only three qualify (Grenada, Panama, and Iraq).  Another seven are possibilities, if you stretch the definition to include sending troops to help fighters already battling with the government (Libya, Kuwait, Kosovo, Haiti, Somalia, Afghanistan, and Bosnia).  But this list includes Liberia -- where US troops acted as peacekeepers to stop the citizens from slaughtering each other -- and Congo, where they were sent in for humanitarian aid after refugees from the Rwandan genocide started pouring across the border!

Outrage is easy.  The trouble is, making sure you're not passing along a falsehood is easy, too, in these days where information is available at the touch of a keyboard.  There is no excuse for the fast-forward-finger.

The bottom line is: truth matters.  As Daniel Patrick Moynihan so eloquently put it, you are entitled to your own opinions, but you are not entitled to your own facts.  If you want to argue your position, that's fine and dandy, whether or not I agree with you.  But supporting your cause with lies helps nothing and no one.

All it does is make it look like you don't know how to do a Google search.
Posted by Gordon Bonnet at 3:28 AM