No science, no vote.

As a nation, we need to stand up and say that we are sick of political candidates who espouse ignorant, anti-science views.

The topic comes up because of  the Republican primary debate night before last.  All eyes, of course, were on Donald Trump; with the lead he's got, he's going to be hard to beat for the nomination unless he makes a serious misstep.

He made one two nights ago.  But the bizarre thing is that damn near no one is talking about it.

I mean, he made a good many other cringe-worthy statements, all delivered with his badda-bing-badda-boom style that for some reason seems to excite people.  Perhaps the most embarrassing moment of all was the exchange with Carly Fiorina over his questioning how anyone "could vote for that face," which ended with a verbal right hook from Fiorina and a babbling you're-beautiful-who-loves-ya-baby backpedal response from Trump.  But despite his gaffes and handwaving and mugging for the camera, and his zero details, we'll-just-fix-it platform, he pretty much stuck with his political script throughout the whole debate.

Until the topic of vaccines came up, and Trump said he thought that vaccination causes autism.

"People that work for me, just the other day," Trump said, "two years old, two and a half years old, their child, their beautiful child, went to have the vaccine and came back and a week later got a tremendous fever, got very very sick, now is autistic." 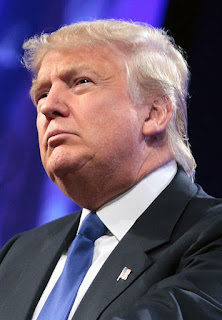 The moderator asked Ben Carson and Rand Paul to respond to that.  Why did he pick those two, out of the ten other people in the debate?

Because they're doctors, that's why.  They should know the truth, and be unafraid to say it.

And both of them bobbled the question.

At a moment when the appropriate response would have been, "You, Mr. Trump, are dead wrong, and are apparently incapable of reading peer-reviewed science," both of them gave milquetoast rebuttals that sidestepped the main point -- that what Trump had just said was dangerously incorrect.

There have been numerous studies, and they have not shown any correlation between vaccination and autism.  This was something that was spread widely fifteen or twenty years ago, and has not been adequately, you know, revealed to the public what's actually going on.  Vaccines are very important.  Certain ones; the ones that would prevent death or crippling.  There are others, a multitude of vaccines, that probably don't fit in that category, and there should be some discretion in those cases.  You know, a lot of this is pushed by big government.  And that's one of the things that people so vehemently want to get rid of, big government.

Trump, whose motto is Death Before Backing Down, responded:


Autism has become an epidemic.  Twenty-five years ago, thirty-five years ago, you look at the statistics, not even close.  It has gotten totally out of control.  I am totally in favor of vaccines, but I want smaller doses over a longer period of time.  Because you take a baby in, and I've seen it, I've seen it, with my children, you give them over a long period of time the same amount.  You take this beautiful little baby, and you pump... I mean, it looks like it's meant for a horse, not for a child...  Give the same amount, little doses over a long period of time, you'll see a big impact on autism.

And Carson said in response to that:


The fact of the matter is, we have extremely well-documented proof that there is no autism associated with vaccinations.  But it is true that we are probably giving way too many in too short a period of time.

So Dr. Carson, can you show me your peer-reviewed research that shows a connection between administering vaccines over a short period of time... and anything?


One of the greatest discoveries of all times was vaccines, particularly for smallpox... I'm all for vaccines, but I'm also for freedom.  I'm a little concerned about how they're bunched up.  My kids had all of their vaccines, and even if the science says that bunching up is not a problem, I ought to have the right to spread my vaccines out at the very least.

Did you catch that?  Freedom to do what you want.  Even if the science says you're wrong, and that you are putting your own children, and other people's lives, at risk.

Okay, I know I'm not very political.  I'm up-front about that, and have mentioned it more than once in this blog.  I have neither the knowledge nor the experience to make statements on most political topics with anything close to authority.

But dammit, we can not continue to have leaders who ignore science.  And it doesn't matter why they're doing it -- political expediency, pandering to their voter base, or outright foolishness.  There are too many problems we are facing as a nation and a world that can only be approached from a scientific knowledge base to elect someone who is willfully ignorant (or as my dad used to call it, "stupid") regarding such issues as vaccination, climate, and the environment.

Science is a process.  It is a way of sifting out fact from fiction, good ideas from bad ones, solid theory from folly and superstition.  It is time for voters to treat a baseline knowledge of science, and a respect for scientific research, as a sine qua non for electability.

In which case Trump, Carson, and Paul just catapulted themselves right out of the running.
Posted by Gordon Bonnet at 2:08 AM