In today's episode of You've Got Mail, I recently got an email that poses an interesting question.  Here's the relevant bit:

You talk a lot about how the only way to know something is evidence.  What if the only evidence you have is someone else's word?  Yes I know you can't believe everything people say, but your position is more that we have to start out thinking everyone's a liar.  Guilty until proved innocent...

I've been interested for a long time in Project Serpo.  I don't know if you've heard of it.  It's probably something that a person like you would dismiss immediately.  But that's not skepticism, because you can't prove it's not real, even if I can't prove it is.  You should look at the link I'm sending with an open mind.

Some people's stories are going to be true.  Not everyone's a liar...  We should be taking claims like Project Serpo seriously unless they get proved to be hoaxes.

First, I'm kind of honored that Greg T. calls me "Mr. Skepticism."  It's a title I wouldn't mind adopting, and certainly is better than some of the other salutations I've seen in my fan mail, which have included "Dear Asshole" and "You Worthless Wanker."  So we're off to a good start.

But he does ask an interesting question.  Are we really stuck with either dismissing all anecdote out of hand, or else accepting it all with equal abandon?  Is there a way to winnow out fact from fiction when all we have is someone's word -- or are we left with Neil deGrasse Tyson's pronouncement, "If you tell me, 'You gotta believe it, I saw it,' I'm gonna tell you to go home.  In science, we need more than 'I saw it.'"

So I looked at the Project Serpo link that was kindly provided, and it does turn out to be an interesting case in the sense that we have zero hard evidence for a pretty wild, and quite detailed, claim.  The site turns out to have the Wall O' Words format, so it's a lot to sift through; the gist, if you don't feel like spending an hour scrolling through text, is that in the Roswell UFO incident, one of the aliens survived.  The government sent in specialists who eventually were able to communicate with him, and it turns out that he and his less-fortunate shipmates came from a planet they call "Serpo" that orbits the star that terrestrial astronomers know as Zeta Reticuli.

UFO enthusiasts undoubtedly will recognize this name.  It's the star that figures prominently in the wild tales of Zecharia Sitchin, who said that it was home to the Grays, the bald, big-eyed aliens of the type made famous in Close Encounters of the Third Kind.  But since Greg's question was about determining the truth value of a single claim, and not all of the other stuff that gets appended to it, let's stick to only what was in the Project Serpo site itself.

Because the Project Serpo goes beyond the usual Roswell crash stuff; this claims that the surviving alien told scientists on Earth how to go to Serpo... and we sent a successful manned mission to the planet to study it, staying there for ten Earth years and afterwards bringing home a load of information on another planet's civilization. 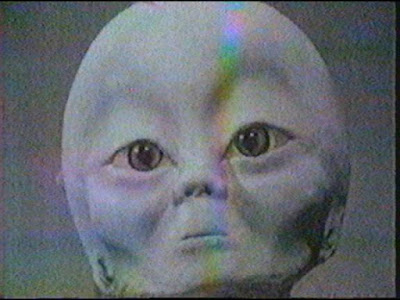 A denizen of Serpo

What I look for, in evaluating such material, is anything I can hook onto that seems either (1) well-supported by evidence outside the claim itself, or (2) contradicted by known science.  And in this case, we have a lot of material to test by those standards.  The more we find that fails this test -- the more bits we run into that are contradicted by what is known to be true -- the less plausible the entire claim is.

And right away, we have a few pieces that raised my eyebrows.  Let's start with a bit about "pentagen," supposedly used as a fuel on Serpo:


Pentagen is the fifth isotope of Hydrogen. It is radioactive with a half life of .34222 seconds.  However, with a complex containment and storage system, Pentagen can be collected for an extended period of time...  This storage vessel is where the Pentagen is finally collected and stored.  The interior of the Vessel is lined with an alloy of Beryllium.  The Vessel contains several complex "collection" tubes that collects, cools and stores the Pentagen during the final production process.  The final product is collected in liquid helium, which is charged with gamma radiation.

There are two problems here.  First is that there is not even a fourth isotope of hydrogen, much less a fifth one.  Ordinary hydrogen (hydrogen-1), deuterium (hydrogen-2), and tritium (hydrogen-3) -- and that's it.  But maybe, you might be saying, the Serpons (or whatever they call themselves) have found something outside the realm of our own discoveries?  That's possible, yes?

Yes, but take a look at two other statements -- that cooling the "pentagen" increases its stability and thus its half-life, and that it's collected in liquid helium that has been "charged with gamma radiation."  Both are obvious falsehoods.  Temperature has no effect on radioactive decay rate; this claim has been tested extensively.  In fact, there is no known physical process that has any effect at all on half-life.  And there is no way to "charge something with gamma radiation."  Gamma radiation is high-frequency electromagnetic radiation -- i.e., light.  You can't charge something with light, because photons move.

At the speed of light, in fact.


It was determined that Kepler's Laws did not apply to that solar system [Zeta Reticuli]. So, one of the things our Earth-based scientists learned was not to apply Earth's laws of physics in a universal way.

Whenever we're told that the laws of physics are different somewhere else, it always brings up lots of red flags.  From Earth-based observation of the motions of stars and galaxies, we are driven to the conclusion that the mathematical rules governing forces and motion are universal across the cosmos -- so the idea of Zeta Reticuli being some kind of Kepler's-Laws-free zone sounds pretty sketchy.  In the immortal words of Chief Engineer Montgomery Scott, "Ye canna change the laws o' physics."

Also suspicious is the fact that although we're told that the Away Team eventually was able to understand and speak 30% of the Serpon language, we're not told anything about it except that it's "tonal."  Why would the returning researchers not share what they developed in the way of a Serpon-English dictionary?  Surely that would be easy enough to do.  The fact that we're not given any information about this rather easy-to-relate bit of information is curious, isn't it?

But why is this suspicious?  Because it's really hard to fake an authentic language -- if we were given even 10% of the Serpon language to study, linguists could tell if it was real or made up.  This looks, unfortunately, like they're withholding information for the very good reason that it would give away the game.

And on and on.  These are only a couple of points, selected for the sake of brevity from dozens of sub-claims that were implausible enough to call the entire thing into question.  And even the study of the site that I've done is only skimming the surface.  There's lots more there, and I invite anyone who's interested to delve into the site and find other bits and pieces that shoot holes in the claim.  But my point is, to return to the original question; we're not obliged either to accept anecdotes without question, or reject them without question.  There's a third way, which is to engage our logic centers and knowledge of science, and see if what's being claimed makes sense.

And in the case of "Project Serpo" -- I'm afraid the answer is no.

Posted by Gordon Bonnet at 5:04 AM