A lot of you might have heard about the newest character on Sesame Street -- a little girl named Julia who is autistic. 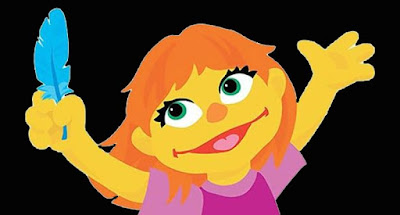 It's a gutsy move by a show long known for its efforts to teach children about fairness and compassion and the effects of social stigma.  Its goal statement has included right from the beginning the intent to encourage children to "appreciate cultural diversity by modeling people who differ in appearance, action, or point of view playing together, working together, making friends, and resolving conflicts."  From its inception, there was a deliberate decision made to have minorities and people of various ages deeply represented, and not simply to have a token minority character or two.  They also never shied away from helping children to deal with difficult topics -- unusual in a kids' show.  For example, Sesame Street deliberately (and tactfully) addressed the concerns and fears children had after 9/11 and Hurricane Katrina.

So the move to include an autistic character was perhaps to be expected from the directors of such a thoughtful and forward-thinking show.  The author of the story introducing the character, Leslie Kimmerman, wrote, "More than 20 years ago, my beautiful son received the diagnosis of autism, and my world changed instantly and profoundly.  I knew nothing about autism, and it seemed that those around me — even the professionals — didn’t know much either.  Today, happily, that has changed."

She and the others involved in the creation of the character hope that this will bring awareness and understanding, given that non-autistic children watching the show will inevitably interact with autistic children in school, and also to help autistic viewers to feel more accepted.  Jeanette Betancourt, Sesame Street's senior vice president, said, "Children with autism are five times more likely to get bullied.  And with one in 68 children having autism, that’s a lot of bullying.  Our goal is to bring forth what all children share in common, not their differences.  Children with autism share in the joy of playing and loving and being friends and being part of a group."

Hard to see what's to criticize about that.  I have several friends with autistic children, and the response from them has been uniformly positive.  So imagine my surprise when I found out that the anti-vaxxers are saying that the move is actually an end run by "Big Pharma" to make autism seem normal, so that we'll continue to get vaccinated.

It'll probably come as no surprise that the person spearheading the claim is Mike "The Health Ranger" Adams, founder of Natural News.  Adams has repeatedly demonstrated that he doesn't have a very firm grasp on reality -- a quick perusal of the headlines on Natural News is usually sufficient to confirm that.  But this has revealed an uglier side of his narrative, one which the glitzy, health food polish of the site might hide.

Adams writes, "The rollout of autistic Julia is Sesame Street’s attempt to ‘normalize’ vaccine injuries and depict those victimized by vaccines as happy, ‘amazing’ children rather than admitting the truth that vaccines cause autism in some children and we should therefore make vaccines safer and less frequent to save those children from a lifetime of neurological damage."

Well, Mike, let's start out with the obvious.  (The more sensitive members of the studio audience might want to plug their ears.)

VACCINES DO NOT CAUSE AUTISM, YOU ANTI-SCIENCE, IRRATIONAL, WILLFULLY IGNORANT LOON.  What they do is they protect children from devastating diseases that used to kill or permanently injure thousands every year.  Just because every scientific study done on the topic has confirmed results that run counter to the mission statement of your company does not mean that there's a conspiracy to discredit you.

It simply means that you are wrong.

But second, and more encouragingly, I think Adams may have miscalculated this time.  To discredit an attempt to "normalize" autistic children -- his words, not mine -- puts him in serious danger of alienating the very people he's dependent on for support, namely parents of autistic children whom he has hoodwinked into believing that their kids' health issues were caused by vaccination.  Even if you are a parent of an autistic child who believes that modern medicine is responsible for autism, calling a television show that is trying to heighten awareness and understanding of your child's condition a conspiracy by the pharmaceutical companies doesn't seem like it would strengthen the anti-vaxxers' credibility.

More likely, it would bring up thoughts of, "Wait, I thought he actually cared about autistic children.  If so, why is he condemning a show that is working towards seeing them treated fairly?"

So as a PR move, it stands a good chance of backfiring, which is all to the good.

But it's also a bit puzzling, even coming from a guy who shows every evidence of having spent too much time doing sit-ups underneath parked cars.  Okay, in Adams's BizarroWorld, "Big Pharma" has fucked things up royally by creating vaccines that cause neurological damage in children.  If so, then why on earth would they respond by spending millions of dollars on a campaign to "normalize autism" on a children's show instead of simply making the vaccines safer?

Maybe it's because the vaccines are already safe, the scientists are right -- and Mike Adams has gone even further off the deep end than he was before, however impossible that sounds.
Posted by Gordon Bonnet at 2:45 AM