I don't usually do this sort of thing, but I'm going to make a request to my readers: boycott The History Channel and Discovery.

But both channels have devolved over the last few years into the lowest form of sensationalist garbage, the television version of clickbait websites.  Ancient Aliens.  Pawn Stars.  God vs. Satan.  Haunted History.  Swamp People.  Naked and Afraid.  Mermaids: The Body Found.  Amish Mafia.  Bar Hunters.  The only good show on both networks put together was Mythbusters, and hell, I just found out a couple of weeks ago that that is going off the air.

The History Channel definitely hit a new low a couple of days ago with the show Bigfoot Captured.  You'd think a cryptozoology buff like myself would have been psyched, wouldn't you?  Even though I must add, at the risk of protesting too much, that I still don't have enough evidence to say that Bigfoot, or any other cryptid, actually exists.

But I'd love it if it did, you know?  If we found out that we shared the planet with another intelligent hominid, how cool would that be? 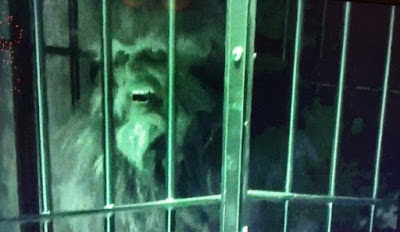 Any serious attempts to decide if such creatures do exist, however, are not assisted by such steaming mounds of bullshit as Bigfoot Captured.  And the problem is, this show and others like it don't even play fair.  They're billed as documentaries -- even though the story's not real, the majority of the characters are actors playing the roles of fictitious people, and none of the events depicted actually happened.  It's like someone took a cryptozoologist's wet dream and somehow turned it into a television show.

This show was so bad it wasn't even good for the humor value, which I have to admit programs like Ghost Hunters occasionally were.  This show was so bad even Jeff Meldrum, a Bigfoot researcher who was interviewed on the show and who has been known to throw himself behind some fairly sketchy stuff, disavowed any support for it:


To head off the flood of emails and phone calls, let me reiterate that as a guest interviewee, I had nothing to do with the overall plot or creative content of this production.  I do my best assess the intentions of a production company when I am approached, an encourage them to build upon credible information, but occasionally their enthusiasm is feigned and assurances are worthless.  It's always a bit of a crap shoot in this business.

Now, you might be saying, "Okay, Gordon, calm down.  So what if they make these shows for entertainment purposes?  Everyone who watches it knows it's not real."

It'd be nice if that were true, wouldn't it?  But Jim Vorel, of Paste Magazine, did a scan of Twitter while and immediately after Bigfoot Captured aired, and found the following tweets from watchers:

Look, it's not that I'm against speculation.  Sometimes people doggedly pursuing ideas that everyone has thought ridiculous has paid off in the end.  But there is nothing to be gained by formerly reputable channels airing fiction passed off as truth, and fantasy passed off as documentary.  In the end, it makes everyone's job harder, from lowly science teachers like myself who are trying to get kids to learn how to sort fact from bullshit, to the honest researchers who would like to investigate fringe claims and do so in a rational, evidence-based manner.

So it's time to turn off The History Channel and Discovery.  They've been veering off course for a while, but it's getting worse, and it's time to send a message.  Stop watching this garbage, and better yet, send a letter or an email to them telling them you're doing so.  It's time to get some good science and history programming back on the air.

Hell, when we have to wait for a network owned by Rupert Murdoch to air shows like Cosmos: A Spacetime Odyssey, there's something seriously fucked up.
Posted by Gordon Bonnet at 4:25 AM