So it's a bright time in the calendar year here in the United States, despite the shortening of days and cooling of the weather.  Thanksgiving approaches, with its promise of good meals and family together-time.  And after that, of course, we have the Christmas season, a time of gift-giving, religious observance, and atheists declaring war on happiness, tradition, and little children's hopes and dreams.

At least that's the contention of a certain cadre of über-Christians, who every year trot out the whole tired "War on Christmas" trope.  Can we just get one thing out of the way, right from the beginning?

I am an outspoken atheist blogger, and I put up a Christmas tree every year.  I think they're beautiful. I love getting gifts for my family and friends, even though my gift-wrapping abilities are such that the presents I give usually look like they were wrapped either by a four-year-old or an unusually artistic gorilla.  I like a lot of Christmas music -- "O Holy Night" and "What Child is This?" are two particular favorites.  (I do have to admit, though, that I find "Frosty the Snowman" and "The Little Drummer Boy" so annoying that I nearly break my index finger turning the car radio off when they start playing.)

And most of my atheist friends are the same way.  We have no problem with anyone celebrating Christmas, or not, as they see fit -- as long as (1) it's not forced on anyone, and (2) Christmas displays aren't paid for at public expense.  If you follow those two rules, you can have a Christmas scene out on your lawn with lights so bright that it disrupts flyover jet traffic, as far as I'm concerned.

But that hasn't stopped the idiotic rhetoric from starting.  And this year, it's directed at none other than Starbucks, because they changed their holiday cup design from having reindeer and snowflakes to a simple red-and-green.

Well.  You'd think they were proposing terrorist attacks on Whoville, from the reaction that got.  Here's a smattering of responses:

From Christian Institute's spokesperson Simon Calvert: "What is it about Christmas that Starbucks are [sic] afraid of celebrating?  Haven’t they heard it’s the most wonderful time of the year, and the season of good will to ALL men?"

From social media commentator Chuck Nellis: "My Christmas mentality: if a store won't promote Christmas re Starbucks, I'm not spending my hard-earned money there."

From Christian radio personality Joshua Feuerstein: "Starbucks has removed Christmas from their cups because they hate Jesus...  The Christian majority in this country has awakened and are demanding that our voice be heard."

Trust me, Joshua, we never have problems hearing the Christians of your stripe. given that they always seem to be screaming with outrage over something even though they are, as you point out, still the majority in this country and in control of damn near everything. 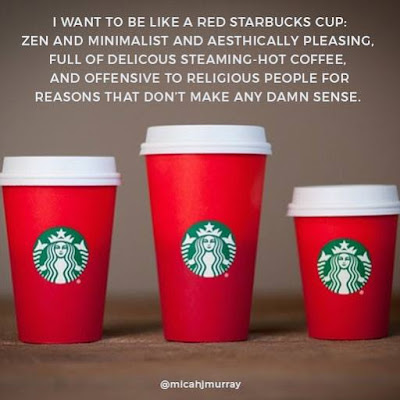 It seems like people of this mindset would not be content until every business, everywhere, plasters their walls with "Merry Christmas" and "Jesus Is The Reason For The Season," and blares Christmas carols from their speakers 24/7.  Anything less is a deliberate and personal attack against everything holy.

What makes this wryly funny is that one of Starbucks' most popular seasonal coffees is called "Christmas Blend."  ("Just right for the season," the description says.)

I wonder if the people who are screeching about this realize how rapidly this sort of behavior makes you lose your credibility.  Take for example Colorado pastor Kevin Swanson, who at the National Religious Liberties Conference last week had a complete meltdown in public and said that god was going to wreak destruction on the United States because of Harry Potter, despite the fact that the books were written by a British author, are set in Britain, and generated a movie series wherein the parts were played by British actors.

God, evidently, is not known for his accurate aim while exercising his "smite" option.

So anyway.  It's doubtful that Starbucks is anti-Christmas, given that the cups are still red and green, and a business deliberately cutting itself out of sales during the Christmas season would be kind of stupid financially.  Baby Jesus is unlikely to be upset if his image isn't broadcast everywhere; we all know that Christmas is coming, okay?

Let me end with an admonition from the War-on-Christmas cadre's favorite book, specifically Matthew 6:6: "But thou, when thou prayest, enter into thy closet, and when thou hast shut thy door, pray to thy Father which is in secret; and thy Father which seeth in secret shall reward thee openly."
Posted by Gordon Bonnet at 2:29 AM