There's a logical fallacy I've seen a lot lately.  It's called argumentum ad Monsantum (also known as argumentum ad Hitlerum).  The idea is that you can immediately cast doubt on the motives of a person or organization if you compare them to, or (worse) claim they got their ideas from, a stand-in for The Boogeyman.  Monsanto, Hitler, communists, Muslims, whatever one seems apt at the time.

Of course, this boils down to lazy thinking, which most of the fallacies do.

What's rather maddening about this is that the opposite can happen, too.  Give something an association with a name that's considered positive, and you automatically reap the benefits of a reflected glow of goodness, whether or not it's deserved.

You could call this the Compare-Yourelf-To-Mother-Teresa-And-Declare-Victory ploy.

The argumentum ad Monsantum strategy has been much used in the fight against GMOs, since Monsanto has been heavily involved in developing genetically modified crops for years.  How anyone who has even a smidgen of a background in science can fall for this is beyond me; comparing RoundUp-Ready Wheat with late blight-resistant potatoes makes no sense from any standpoint, from effects on human health to ecological impact.  (Consider that the former results in an increase in the use of chemical pesticides, and the latter decreases it.)

Saying that all GMOs are bad is, in fact, precisely equivalent to claiming that all genes do the same thing. 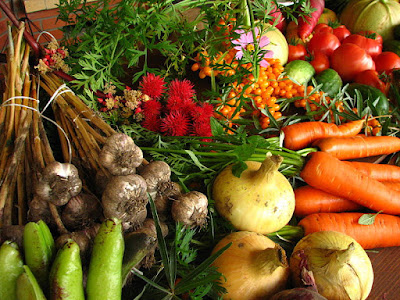 [image courtesy of photographer Elina Mark and the Wikimedia Commons]

What's wryly amusing about this is that the opposite side of the same coin -- the word organic -- is maybe not as squeaky-clean as it's been billed.  The reputation of organic produce for containing less in the way of Nasty Chemicals is apparently ill-deserved, considering a story by David Zaruk over at The Risk-Monger that revealed a startling fact -- that organic farmers in the United States are certified to use three thousand substances that are designated as toxic, and that are considered acceptable purely because they're "natural."

Copper sulfate, used as a fungicide, is highly toxic to fish, and is completely non-biodegradable.  Pyrethrin and azadirachtin (neem oil), insecticides that come from plants and therefore are somehow thought to be better than synthetics, are lethal to honeybees and carcinogenic in humans.  Rotenone, from the leafy parts of the jicama plant, kills damn near everything you put it on.

Also on the list is nicotine.  Made, presumably, from all-natural, organic, health-supporting tobacco plants.

Worse still, once produce is certified organic, it bypasses any kind of requirement for pesticide residue testing.  Because organic produce isn't supposed to have any pesticides on it, right?

Monsanto = bad.  GMO = bad.  Organic = good.  All a way to give yourself a nice warm feeling of being socially and environmentally responsible, not to mention healthy, and then to stop thinking.  Myself, I would rather the responsible use of synthetic fertilizers and pesticides, which comes along with mountains of information on hazards and requirements for residue testing, than giving free rein to people who believe that Natural Must Mean Good For You.

Now, don't get me wrong; I think that a lot of the organic food movement is driven by the right motives.  Creating our food with as little negative environmental impact as possible, and producing food that is healthy and nutritious, are certainly goals to be lauded.  What is unclear is whether the rules governing organic food production as they now exist are meeting those goals.

But the beat goes on, which is why there was an apparently serious article over at The Organic Authority wherein we learn that artist and practitioner of magic Steven Leyba is mounting a one-man campaign against Monsanto, spurred by his own personal health experiences:


In 2010 I had been overweight and decided to get healthy.  I started eating large amounts of fruits and vegetables from my local grocery store.  I got sick and that was the time I found out about GMOs.  I was appalled.  I couldn’t understand why I would get so sick by eating what I thought was so healthy.  When I switched to organic food I got healthy again.

And since anecdote with a sample size of one is apparently data, Leyba decided to take matters into his own hands, and is launching a magic spell against Monsanto:

Death curses work like any manifestation of will like Gestalt psychology; you visualize and act in accordance and at some point what you can conceive and believe you can achieve.  Medicine men practice this and even medical doctors to some extent practice this.  They plant suggestions in people’s minds for healing and those people start to do things that promote their own healing.  For me I see a great need to identify the cancer (Monsanto and Nestlé) and attack with full force and mirror back this so-called Black Magic they are doing to all of us.

So he made a book full of disturbing imagery that includes demented portraits of executives who work for Monsanto, and also Supreme Court Justice Clarence Thomas, who worked as an attorney for Monsanto in the 1970s.

"I encourage everyone to Death Curse Monsanto and Nestlé," Leyba says.  "Justifiable Death Curses are effective on many levels, fun, cathartic... and completely legal."

Article author Jill Ettinger, far from casting a wry eye at Leyba's Eye Of Newt approach to taking down Monsanto, seems to think it's a great idea.  And given the recent push in the United States for mandatory labeling of GMOs, "it may just be working," she says.

No harm, I suppose, if it amuses him.  But wouldn't it be better to learn some actual science, rather than giving in to fear talk and ignorance?  Not to mention (literal) magical thinking?

The world is complex, and when the motives of people and corporations get involved, it becomes even worse.  It'd be nice if categorical thinking really worked.  The difficult truth is, if you want to give yourself the best shot at making smart choices for yourself, both with respect to your personal health and the environmental impact, there's no substitute for bypassing the hype on both sides and understanding the reality beneath it all.
Posted by Gordon Bonnet at 2:47 AM