I got an email yesterday with two links and a message.  The message said:


Wondering what you think of this.  I'm not convinced but I think it's interesting.  This guy says he's made a device that can allow two-way communication with the dead.  The messages he picks up do seem to be answering specific questions and comments he's making.  Not just random words or phrases.

The links he provided were to YouTube videos made by a guy named Steve Huff, selling software that is called "The Impossible Box."  He claims that this software is manipulable by the disembodied spirits of the dead, who apparently surround us.  The first link plays audio recordings of messages that Huff has received using the software; in the second, he explains to us how he thinks it works.

Here are a few of the messages he received:

And so forth and so on.  The software is available for download for $49.95 (and can be purchased here).

So I watched both videos, and predictably, I'm unconvinced.

The way it works, which he does get to on the second video (about halfway through), is that the software scans internet radio, and pulls out words and phrases that it then plays for you.  Allegedly, this software only turns on when the ghosts have something to say.  "There is no continuous scan of audio," Huff tells us.  "The scan only starts when the spirits want to speak." 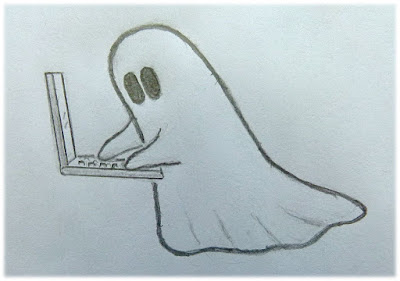 When it comes to explaining how the programmer created code that can specifically be manipulated by the dead, he's a little cagier.  The Impossible Box contains "software with all kinds of tech," he says, giving no other real details presumably to protect his proprietary interest, but also preventing any kind of critical analysis of what's really going on in there.

The real problem here, though, is the same one that plagues attempts to demonstrate that rock musicians have engaged in backmasking -- hiding demonic messages in songs, so that when you play them backwards you hear voices saying things like "Here's to my sweet Satan."  (That one is from one of the most famous claims of backmasking -- in Led Zeppelin's "Stairway to Heaven.")  As Michael Shermer points out in his wonderful TED talk "Why People Believe Weird Things," the message only becomes clear when someone tells you what the demons are saying via a caption -- just as Huff does in his video.  Before we're primed by being told what the message is, it more or less sounds like gibberish.  "You can't miss it," Shermer says, "when I tell you what's there."

The other thing that is troubling is the question of why ghosts have to have source audio in order to speak.  If they can manipulate software, you'd think they'd be able to do the same thing without having to rely on picking out words from internet radio.  He tried making a "spirit box" that used white noise instead of scanning radio, Huff says, and it didn't work.  "Spirits have a hard time forming words out of white noise as a source audio," he tells us.  "They need audio with human words to really be able to leave you sentences "

Which I find awfully convenient.  We're given garbled phrases, made up from words pulled from internet radio, and we get to decide what it is we're hearing, and then assign meaning to it.  While it's possible that we're talking with ghosts, what's more likely is that we're seeing some kind of audio version of the ideomotor effect, where our own subconscious decisions and expectations of meaning are creating a message where there really is none.

Now, let me conclude with saying something I've said before; I'm not saying that the afterlife is impossible, nor that spirits (should such exist) might not try to communicate with the living.  All I'm saying is that the evidence I've thus far seen is unconvincing, and I find the perfectly natural explanations for what is going on in The Impossible Box (and other spirit communication devices) sufficient to account for any ghostly messages Huff and others have received.  If anyone does decide to shell out the fifty bucks for the software, however, I'd be really interested to hear what your experience is with it -- and especially, if you got information from Great-Aunt Marjorie that you couldn't have otherwise got, and not just vague messages like "The light will surround you."

Until then, however, I'm afraid that I'm still in the "dubious" camp.
Posted by Gordon Bonnet at 2:36 AM