I think we need to clarify what counts as a "gotcha question."

It's a charge that gets levied against the media every time a political candidate is asked an awkward question.  Doesn't seem to matter whether the awkward question is relevant or not, whether it has anything to do with qualifications for public office, whether it makes sense or not.  If the candidate doesn't want to answer the question -- for whatever reason -- all (s)he has to do is call it a "gotcha question," and the onus is thrown back on the media for even asking it.

Now, to be fair, some things are "gotcha questions."  Take, for example, the question that Jeb Bush was asked a couple of days ago by a reporter from Huffington Post, apropos of whether Jeb would go back in time if he could and kill Hitler as a baby.

So here we have a question that presupposes using an impossibility (time travel) to commit a crime that might or might not prevent World War II and the Holocaust.  In Jeb's place, I would have responded, "What a fucking stupid question.  Where did you get your journalism degree from, Steve's Mail-Order Diploma Warehouse?"

Which explains, at least in part, why I will never run for public office.

Jeb, instead, decided to answer it.  He said, "Hell, yeah, I would.  You gotta step up, man...  It could have a dangerous effect on everything else, but I'd do it."

And what was he expected to say?  "No, I'd leave Baby Hitler alive, and sacrifice millions of innocent lives instead."  Or, "No, the bible forbids the taking of a life, I wouldn't kill an infant even if it results in a disaster."  Or "Of course, ethics demands that the value of many lives outweighs the value of a single person, even though I've claimed in the past that every life is sacred."  No matter what he answers, he opens himself up to being blasted -- and all over something that isn't even a hypothetical, it's completely impossible. 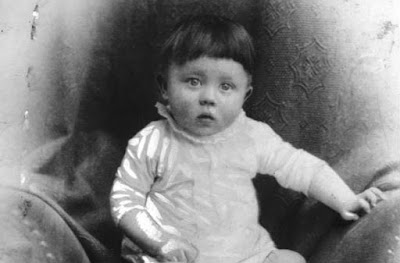 Adolf Hitler as an infant [image courtesy of the Wikimedia Commons]

On the other hand, the questions that Ben Carson is being asked about his veracity in the past are not "gotcha questions."

There's his claim that he was offered a scholarship to West Point -- until it came out that West Point doesn't offer scholarships, and he amended that to saying that he was "invited to apply by a local ROTC officer."  Then it turned out that he in fact never even applied.  Carson said the news stories about the claim were a "political hit job."

There are the stories of his troubled childhood, that more than one person who knew Carson as a child say simply aren't true.  Carson responded by saying that the stories were too true, and that the things he recounted had happened even though none of the folks who knew him were aware of it at the time.

Then there's further evidence of a tenuous grasp on reality, with his claim that the Great Pyramids of Egypt were built by the biblical figure Joseph as places to store grain.  Confronted with this bizarre statement, Carson stood by what he said, placidly responding that the controversy over his words was nothing more than a liberal hatchet job.  "The secular progressives try to ridicule it every time it comes up and they're welcome to do that." 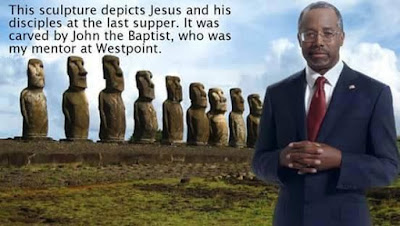 See the difference?  With Bush, we have a deliberate setup using a pointless hypothetical, where any answer would leave you open to being lambasted by one side or the other.  With Carson, there are very real questions regarding his apparent lack of understanding of the commandment "Thou shalt not lie," not to mention its less-known corollary, "Thou shalt not make weird shit up."

So anyway.  Yes, the media could do a better job of avoiding stupid "If you were a fruit, would you be a banana or a mango?" type questions.  Just like with any profession, there are people who are competent and intelligent journalists, and people who are total morons.  But that doesn't make every awkward question that puts a candidate on the spot a "gotcha question."  There are times we need answers, because political figures should be held accountable for the claims they make.

To put it simply: dammit, truth matters.
Posted by Gordon Bonnet at 1:49 AM