There is nothing good to be gained by the politicization of science.

At its most fundamental level, science is not a political pursuit at all.  It is, or should be, the pursuit of a rigorous standard of inquiry to broaden our knowledge of how the universe works.  The goals and methods of science should not change based on whether you're liberal or conservative, political or apolitical, religious or secular.

Despite this, there are two points where politics impinges on science.  One of them, at least, is defensible; that is the decision regarding what to do when scientific findings impact directly the lives of humans.  For example, whether anthropogenic climate change exists, and predictions regarding how great an impact it will have on sea levels, storm intensity, and so on, are scientific questions.  Those should be answered irrespective of political concerns.  On the other hand, how a country responds to whatever threats do exist -- to what extent money should be appropriated to remedy the causes, or mitigate the effects -- those are political questions, and need to be decided by policymakers.

Unfortunately, there is a second, and more toxic, way that politics impinges on science.  Because science is a pursuit that requires funding, and funding for scientific research often comes from the government, there is a desire by many politicians to support only science that fits the current political narrative.  When it becomes expedient for scientific findings to be discredited, politicians begin weighing in on whether the science itself is valid, regardless whether they have any expertise in the field in question.  (Witness Ted Cruz's recent statement that "climate change is not science, it's religion" -- a comment that is odd from a variety of standpoints, but most strikingly that he's apparently calling something a "religion" to discredit its validity.)

It's not only the conservatives who do this, however.  The focus of the left on such issues as health, diet, and the environment has led to broadside criticism of anyone who calls into question the prevailing wisdom (Monsanto is evil, GMOs are dangerous, the pharmaceutical companies are corrupt).  Just this week an article appeared in The Globe and Mail about the harassment a Canadian scientist is receiving over his discovery that the radiation released from the Fukushima disaster is not causing any problems in the eastern Pacific.

Jay Cullen, of the Integrated Fukushima Ocean Radionuclide Monitoring project, conducted a serious of rigorous tests for radioactive contamination in the water along the Pacific Coast of North America, in response to considerable public concern over the potential for dangerous levels of radioisotopes showing up in seawater, and getting into the marine food chain.

Cullen was motivated by the best of intentions.  "The goal… was that people were asking me, family and friends and the public at large, what the impact of the disaster was on B.C. on the North Pacific and on Canada," he said.  "I started looking for quality monitoring information so I could answer those questions as honestly and accurately as I could."

And after detailed analysis of the data, Cullen determined that the threat was negligible.  Levels of radionuclides in seawater on the Pacific coast of North America were so low that they were barely detectable at all.

You'd think that ecologically-minded types would be glad about this, wouldn't you?

Nope.  Didn't fit the narrative, which is that the threat is too there, and that all of the powers-that-be are conspiring to cover it up.  Cullen was denounced as a shill for the nuclear power industry, and derided as a "sham scientist."

Interestingly, Cullen is hardly an anti-environmental type.  He has repeatedly railed against the practices of overfishing and dumping trash in the mid-ocean.  The oceans are in peril, Cullen says.  No argument there.

Just not from the radiation released from Fukushima.

Nonsense, say his critics.  Look at this map released before the government clampdown, that shows the radiation plume from the disaster: 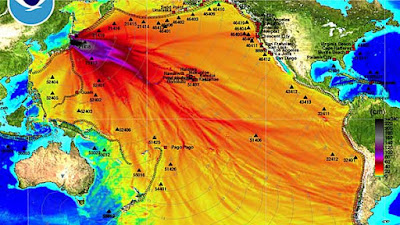 This map has been posted over and over again on blogs and environmental scare sites -- despite the fact that it's not a map of radioactive contamination, it's a map of wave heights from the tsunami.  (A clue would be that the scale on the right is labeled "centimeters," not usually a unit used to measure radioisotope concentration.)

The trouble is that the people who do this sort of thing -- be it the right-wingers who claim that climate change isn't happening, or the left-wingers who claim that Monsanto is trying to kill us all -- are getting the whole process backwards.  Science should inform politics, not the other way around.  Data has no spin.  Because science is, at its best, one of the least biased ways there is to gain information, we should be using the science as a guiding force for determining policy, not using our political beliefs to figure out which bits of science are valid.

But such views aren't politically expedient, because that means we have to be willing to let ourselves be driven wherever the evidence demands, not plant our feet, science-be-damned, in order to retain the favor of our constituency.

Which in the current milieu would be political suicide.
Posted by Gordon Bonnet at 2:37 AM