It must come as a shock to woo-woos to find out that some of their favorite wooful phenomena were actually invented by humans for purely down-to-earth reasons.

Take, for example, the Ouija board.  A lot of paranormal enthusiasts claim that the Ouija board is some kind of portal to the spirit world -- and an equal number of religious types think it's the gateway to hell.  Using it, they say, is just asking to be possessed by an evil demon.  Unfortunately for both contentions, the Ouija board was invented as a parlor game by a toy manufacturer named Elijah Bond in 1890.  Even the name is made up -- Bond stuck together the French and German words for "yes" and decided it would make a catchy name.  Which it is.  Better than the words for "no," anyhow, because "Nonnein" sounds kind of silly.

So finding out that the Ouija board was invented purely to make money is a little deflating to those who think it's some kind of tool for accessing the supernatural.  Which makes me wonder how the woo-woos are going to deal with the recent claim by archaeologists that the hype over Glastonbury is a 12th-century fabrication. 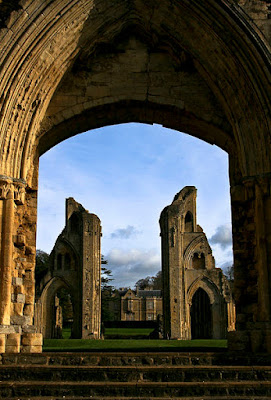 If you're not up to date with woo-woo mysticism and don't know what the deal is over Glastonbury, it's a town in England that is considered to be one of the most "spiritual" places in the world, right up there with Ayers Rock in Australia, Sedona, Arizona, and Salem, Massachusetts.  Supposedly, Glastonbury is the place where Joseph of Arimathea fled after Jesus's crucifixion, and when he got there he thrust his walking stick into the ground, where it took root and now flowers every Christmas.

The problem is, the Glastonbury Thorn doesn't flower at Christmas, it flowers in the spring, like most hawthorns.  No, the faithful say; that's because the current thorn isn't the real thing, which was cut down as an idolatrous image during the Puritan era following the English Civil War.  Even so, there are people who take the whole thing awfully seriously, which is why the current tree (planted in 1951) has been repeatedly vandalized.

Then there's the King Arthur connection, because Glastonbury Abbey is supposedly where the Once and Future King was buried after his death at the hands of his cousin Mordred in the Battle of Salisbury Plain.  There's even an inscription on a stone cross in the Abbey that allegedly has an inscription dating back to the fifth century, and which mentions King Arthur by name.

In addition to all this, or perhaps because of it, Glastonbury (or more specifically the hill Glastonbury Tor that stands nearby) has been identified as being the world's most powerful convergence of "ley lines," lines of spiritual force that allegedly encircle the globe. "[T]he landscape as a whole," we're told, "is imbued with a beauty, mystique and numinescence which has made it well loved over many centuries, and the haunt of many advanced souls."

So with all of this romantic folklore surrounding the spot, it's no wonder that people make pilgrimages to Glastonbury every year.  Which makes a recent paper published by a group of archaeologists at the University of Reading all the more devastating.

Because the new study has shown that all of the mystical trappings surrounding the place were the invention of some 12th century monks who were trying to find a way to raise money when their monastery burned down.

Archaeologist Roberta Gilchrist and her team have spent years looking at both the documents and the structures that supposedly play into the legend.  And she has concluded that after the fire, which occurred in 1184, some enterprising monks decided to cash in on the increasing popularity of the Arthurian mythology (Geoffrey of Monmouth's seminal Historia Regum Brittaniae had only been completed some 46 years earlier, and was still immensely influential).  So they started a rumor that Glastonbury was where Arthur was buried, and that he'd been buried there because it was where Joseph of Arimathea planted his walking stick.  "Look!" they said.  "There's a hawthorn tree up on that hill!  That's the ticket!"

And thus the legend of the Holy Thorn was begun.

Gilchrist and her team said that the stone cross was also the product of the same enterprising brothers, and had been fabricated to resemble earlier Anglo-Saxon and Celtic stone crosses, with the clever addition of an inscription mentioning Arthur by name.  And when they rebuilt the monastery, they made sure to make it of materials, and in a style, that made it look far older than it actually was, so the pilgrims (and the profits) kept rolling in.

As they still do, lo unto this very day.

It's kind of unfortunate, really.  I've always loved the Arthurian legends -- I grew up with tales of Merlin and Gawain and Morgan le Fay and the rest of them, not to mention my discovery during my teen years of Monty Python and the Search for the Holy Grail.  The idea that the whole thing might be some 12th century hoax is kind of sad.

You have to wonder how all the woo-woos will respond.  My guess is, they won't.  They'll ignore the current study just like they've avoided anything remotely factual in the past, and keep on claiming that ley lines and the rest are real.  They haven't based anything on evidence yet, so why start now?
Posted by Gordon Bonnet at 4:40 AM