There's a fundamental rule I follow: if I make a statement, and people I trust take exception to it, I try to listen.

That happened today.  My earlier post (which I will take down as soon as this is posted) resulted in so many people whose opinions I respect taking exception that I have spent most of the day re-analyzing my thoughts regarding the terrorist attacks on Paris, who is responsible, and what our attitude should be toward Islam, ISIS, and the Middle East.

First:  I was beyond angry this morning.  I don't get that way often.  This is not meant as an excuse, merely a statement of fact.  In the grip of high emotion, it's all too easy to let yourself be carried away, to let logic, rationality, and compassion be swept off in a red haze of rage against people who could perpetrate such acts.

But on reading what people have written, both as comments on my blog, on Facebook, and in personal emails, here are a few things I have gleaned.

I'm left with questions.  How do we stop the transmission of the ideology of hatred?  How can we eradicate such blind, senseless violence from the world, without becoming blindly violent ourselves? How can we criticize beliefs and ideas without it sliding into denying the freedom of speech and religious observance to the believers?

I wish I knew the answers.  Hell, if I did, I'd run for president. 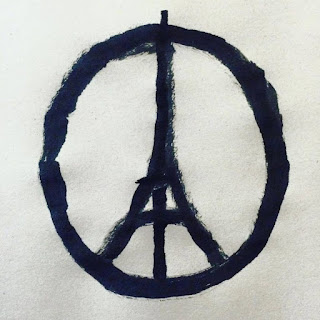 In any case: thank you to all who took the time to respond thoughtfully, even those who were angered by what I said.  To be a true skeptic means to be willing to admit when you're wrong -- or at least, when you have cause for serious uncertainty.  And about the Paris attacks, at the moment I have no answers, just a deep sense of grief that such things could happen in the world.
Posted by Gordon Bonnet at 12:36 PM