Whenever people call computers "time-saving devices," I always chuckle in a sardonic fashion.

My computer at work could probably qualify as an antique.  It is the single slowest computer in the history of mankind.  When I get to school, the first thing I do is to turn my computer on.  I know that with many computers, you can get yourself a cup of coffee while you're waiting for them to boot up.  With this one, I could fly down to Colombia and harvest the coffee beans myself.  It also makes these peculiar little squeaky grunts as it's starting up; I suspect that this is because, instead of a hard drive, this computer is powered by a single hamster running in a wheel.  Perhaps it's slow in the morning because the hamster needs time to wake up, take a shower, get himself a bowl of hamster chow for breakfast, etc.

The network I work on is also astonishingly slow.  Printing especially seems to take forever, which is kind of ironic, because the printer I use is right down the hall from my classroom. When I send a document to the printer, it sometimes prints right away, and sometimes it apparently routs the job through a network located in Uzbekistan.  One time it took twenty minutes to print a sign for my classroom that had six words on it.  During that time the printer sat there like an obtuse lump, grumbling in an ill-tempered sort of way, its screen saying only the word "Calibrating..."  I yelled at it, "What the hell do you have to calibrate?  It's six words on one 8.5"x11" piece of paper!   There! You're calibrated!"  But it didn't listen, of course.  They never do. 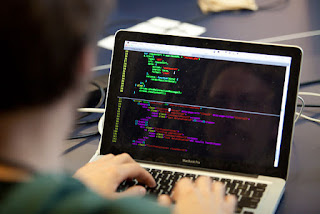 On the other hand, to be fair, perhaps I don't really merit a fast computer.  I am not, I admit readily, the most technologically adept person in the world.  I can find my way around the internet, and handle a variety of word processing and database software well enough.  That, however, represents the limits of my techspertise.  I periodically have guest speakers in my classroom, who invariably want to do some sort of electronic presentation requiring hardware and/or software that has to be brought in and hooked up to my computer in order to work.  I always handle these requests with phenomenal speed and efficiency.  "Bruce," I say, " can you come set this up for me?"

Bruce is our computer tech guy.  Bruce has forgotten more about computers than I'll ever know.  When something goes wrong with my computer, my usual response is to weep softly while smacking my forehead on the keyboard.  This is seldom helpful.  Bruce, on the other hand, will take one look at my computer, smile in his kindly way, and say something like, "Gordon, you forgot to defragment the RAM on your Z-drive," as if this solution would have been obvious to a five-year-old, or even an unusually intelligent dog.  Bruce is an awfully nice person, however.   He's never obnoxious about it.  I'm sure he knows that I'm a computer nitwit, but really doesn't think less of me for it.

He didn't even give me a hard time when I had him come in and look at my document projector, which I used frequently in my environmental science class.  "The interface seems to be working," I said, pointing to the light on the box that said, "Interface."  (Not that I knew what that meant, but it seemed to be a hopeful sign.)  "It's just that the lights on the projector won't come on.  And I changed the bulbs last month, I don't think it's that."

It took Bruce approximately 2.8 milliseconds to locate a switch on the side of the projector that said "Lights."  It was right next to the power switch, so evidently in my fumbling around for the power switch some time earlier that day, I had accidentally turned off the light switch.  This made the lights not come on.

A principal I once worked for used to call me "The Dinosaur."  He made two rather trenchant, and sadly accurate, comments about me; first, that given my teaching style, I would be at home in an 18th century lecture hall; and second, that if I could figure out a way to have my students turn in their homework chiseled on slabs of rock, I probably would.  I still remember being reluctant to switch from old fashioned handwritten gradebooks to computer grade-calculation software, and I recall that I finally made the switch in the year 2000.  The reason I remember is that he quipped that I only entered the 20th century when it was about to end.

The scary part of all of this is that this year, our school district has chosen to trust me with a "Smart Board."  I begged my principal to leave me with my previous lecture tool, a "Dumb Board" (white-board and markers), but he said that I had to face my fears head on.  So far, I've only caused three serious malfunctions in it (one in which I couldn't turn the "erase" function off, as if the "Smart Board" had already decided that what I was about to write wasn't worth reading).  Each time, I solved the problem without calling for Bruce, by unplugging the "Smart Board" and then plugging it back in.

I guess we all have our approaches to learning, and the fact that I'm more comfortable with the old-fashioned, non-technological approach is just something I have to learn to compensate for.  I try to push the envelope and learn about computer-based applications when I can, but the fact remains that I'm probably going to continue to hand-letter most of my documents on rolls of parchment for the foreseeable future.

On the other hand, I probably ought to finish up this post and get ready for work.  If I don't go wake the hamster up soon, he'll still be in the shower when my first class starts.
Posted by Gordon Bonnet at 2:18 AM