The Children's Guide to Nonsense

Two weeks ago I wrote a post suggesting that people who have any concern for the promotion of quality information about how the world works should boycott The History Channel until it stops claiming that shows like MonsterQuest have the least thing to do with reality.

This post prompted a number of emails and comments, which can be distilled down to (1) there's nothing wrong with entertainment, (2) THC is not trying to convince anyone who isn't already convinced, and (3) lighten the hell up.  The number of responses I got along those lines made me wonder for a while if maybe I was taking the whole thing a little too seriously.

Until I read a post a couple of days ago on Jason Colavito's wonderful blog, entitled "History Channel Official 'Ancient Aliens' Guide for Children, Teaches Kids Aliens Are Behind Everything." 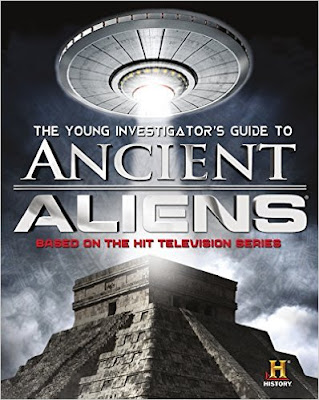 I don't want to steal Colavito's thunder, and all of you should check out his post, which is spot-on.  But the gist is that THC has released a book called The Young Investigator’s Guide to Ancient Aliens: Based on the Hit Television Series.  The Amazon page for the book describes it thusly:


As a tie-in to the wildly successful History Channel show, perfect for young readers, here's a book filled with fascinating tales, ancient folklore, and compelling evidence of the role extraterrestrials may have played in human history.

What really happened to the dinosaurs? Who actually built the ancient pyramids in Egypt? Are airplanes really as modern as we think they are? This book takes a close look at landmark events throughout history and asks the question: What if aliens were involved?

Spanning history, from the earliest of human civilizations to the modern period, this book exposes evidence of the presence of extraterrestrials in some of our most triumphant and devastating moments.

Entertainment, my ass.  This is a calculated effort to catch children while they're young and naïve, and convince them that a zero-evidence pile of horse waste actually has legitimate standing in the world of science.

I was heartened, however, to see that The Young Investigator's Guide has thus far received five reviews, all one-star.  Here's a sampling of the comments from the reviews:


Keep this toxic claptrap away from children.

The War On Science is fought on several fronts, from the schools of red state America to our television screens.  'The History Channel' is contributing to this as it debases the meaning of the word 'History' into anything it thinks will sell no matter what the consequences.

This has to be considered an extension of the mind-numbing influence of ratings-driven TV.  Ratings-driven TV exists as a money sucking virus seeking viewers at all cost.  It doesn't exist to educate or enlighten, to make things better or to warn us about shams and fiction posing as fact.  It exists only to promote an uncritical passive hoard of watchers who predictably consume what is offered in the commercials.  It dumbs us down to serve corporate agendas.

Will we soon be selling electronic editions of "The Little Holocaust Deniers' Guide to the Early 1940s"?

To which I can only add: Huzzah.

Lest you feel too optimistic, however, Colavito points out that the Toronto Public Library System purchased 31 copies of the book, to make sure that several of the 23 libraries in the system had more than one copy.  Not to mention the fact that it's shelved under "nonfiction."

The whole problem here, of course, is that this sort of thing is like a gateway drug to woo-woo.  You hear the "what's the harm?" argument come up, over and over again, with respect to ideas like Ancient Aliens, Astrology, the Tarot, and so on.  And the direct harm is certainly to nothing more than your pocketbook.  But there's a more subtle reason to fight pseudoscience; accepting an idea on anything other than the standards of scientific evidence establishes a habit of uncritical thinking.  If you're willing to buy into nonsense like this based on an I Want To Believe attitude and very little else, what's to stop you from accepting other unscientific ideas that do cause direct harm -- homeopathy, anti-vaxx, climate change denial, and so on?

In any case, check out Colavito's take on the whole thing, which is well worth reading.  And to the "it's just entertainment" crowd; maybe you should give some second thoughts to how insidious a non-scientific approach to the world can be.
Posted by Gordon Bonnet at 4:07 AM