The dying of the light

I was challenged by a loyal reader of Skeptophilia to take on a topic I've never discussed here: end-of-life decisions.


The Humane Society is for "humane" treatment of animals.  "Humane" is supposed to embody the very best of human attributes.  It's "humane" to put a dying or mortally wounded animal out of its misery.  It's murder to do the same for a human.  What would Skeptophillia say about this?

At first I was reluctant, and to be honest, it was from nothing but cowardice.  I responded:


I've tended to shy away from purely moral questions -- to me, morality is very private, and best left to each person's conscience.  That said, I agree with you, and if I knew I was incurably ill and was going to be a burden to my family, I would unhesitatingly choose euthanasia for myself.

Which was disingenuous of me.  And she called me on it:


I'm... interested in what a discussion would be which says we are bound by "God" to allow humans to go through suffering which we would arrest a person for standing idly by and watching an animal go through.  That same "God" who killed 99% of the population of the earth several times?...  I'm just surprised that you take on religion, but "shy away from purely moral questions."  NOT a criticism -- just a conundrum?

Which, of course, was spot on.  And the whole thing came into sharper focus with the story that hit the news last week of five-year-old Julianna Snow, who is dying of an incurable neurodegenerative disease called Charcot-Marie-Tooth syndrome, and whose parents have made the decision that if she has another episode -- nearly a certainty -- she will be taken home and allowed to die rather than going back to the hospital for more excruciating treatments that will ultimately not be successful in any case.

"She made it clear that she doesn't want to go through the hospital again," Julianna's mother Michelle wrote.  "So we had to let go of that plan because it was selfish."

The whole thing took on a more awkward twist when it came out that the discussion the Snows had had with Julianna hinged on her being told that she didn't need to be afraid of dying because she was going to go to heaven afterwards.  "So if you get sick again, you [said that you] want to stay home," Michelle told her daughter.  "But you know that probably means you will go to heaven, right?  And it probably means that you will go to heaven by yourself, and Mommy will join you later."

This appalled a number of people, all for various reasons.  There were people who lambasted the Snows for allowing a five-year-old to make decisions which (in their opinion) she was too young to understand.  Non-religious types said that comforting a child by holding out a false hope of heaven was wrong, and could induce her to choose death because she was being duped into thinking there was an afterlife.  Others said that it amounted to euthanasia, which is immoral, period.

And all of it brought into sharper focus the questions surrounding end-of-life choices.

First, let me say that I hope with all my heart that I never have to be in a situation like this with someone I love.  To be responsible for making the decision of when enough painful medical intervention is enough has to be one of the hardest things anyone could be faced with.

That said: do we really believe that the quantity of life is all that matters, that to extend it by hours or days is the goal regardless of the cost in suffering or the quality of life that would result?  Let me say it again: this girl is dying.  Her condition is progressive, incurable, and agonizing.  It's all very well to say, "Maybe they'll find a cure" -- but the likelihood of finding a cure fast enough to help Julianna is nearly zero.  Is "death later" always a more moral choice than "death sooner?"

As to whether she's capable of understanding death -- probably not, or at least not in its entirety.  But hell, who can?  What she does understand is suffering, that there's no treatment that's going to make her better, that the rest of her short life is going to be spent in devastating pain.  And she understands that death will end that.

What about the parents' holding out the hope of heaven for her?  As an atheist, I might be expected to criticize this, but I can't.  These are grieving parents comforting a dying child.  As a parent myself, I know that I have felt at times like I would do anything to take the pain from my children.  I don't think that what they're telling her is true, no.  But if it gives some emotional comfort to a scared child who is facing an inevitable agonizing death, regardless of what medical science can do?

I can't see that there's anything morally wrong with it.

The quality of life is more important than the quantity.  There, I said it straight out.  The worth of a person's life is not measured solely by its span, and artificially extending someone's life in the case of a progressive and incurable disease is not always the more ethical choice.  How much each person is willing to go through to live should be solely their decision -- when to stop fighting, when to accept death rather than continuing the torture in the hope of a few more months. 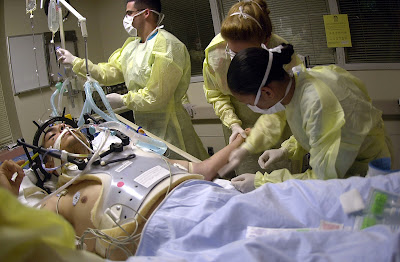 Stephen King wrote in Danse Macabre, "Most of us would like to die peacefully in our beds at age eighty (preferably after a good meal, a bottle of really fine vino, and a really super lay)," and I certainly can't argue with that.  The truth is, however, that few of us are so fortunate.  The idea that we provide our pets with more options for putting an end to the misery of an incurable disease than we do our loved ones casts our own sense of morality in an awkward light indeed.

About my own life, I am as clear as anyone can be when considering such an emotionally fraught question.  If I am facing a life of pain with no hope of improvement; if I am facing the devastation of a disease like Alzheimer's, with the prospects of being a burden on my loved ones for care; if I am being kept alive only by being hooked up to life support -- let me choose death, by whatever means it takes.
Posted by Gordon Bonnet at 2:35 AM