The road to hell

The transition of a culture into fascism is seldom sudden.  It's a slow slide, urged forward by fear and xenophobia, and often catalyzed by the appearance of a charismatic figure who spouts jingoistic talking points, pounding the table and telling everyone that he has the answers, that all will be well if they just vote for him.

And one of the first things that often happens is that his followers, buoyed up by the heady air of finally having a leader who is saying all of the things they've felt for years, begin to shout down the opposition.  Inevitably violence occurs, and a protestor at a rally is beaten up for having the wrong views.  The charismatic leader doesn't chide his followers for their actions; oh, no.   He urges his followers on, suggests that the victim deserved the beating -- which of course fosters further violence and more fear on the part of anyone courageous enough to dissent.

James Luther Adams was one of those victims, and was lucky to get away as more-or-less unscathed as he did:


I didn’t know what was going to happen to me.  Was he going to beat me up because of what I had been saying?...  He shouted at me... "You damn fool, don’t you know that here today you keep your mouth shut or you’ll get your head bashed in... You know what I have done.  I’ve saved you from getting beaten up.  They were not going to continue arguing with you.  You were going to be lying flat on the pavement."

And throughout it all, the moderate rationalists look at each other in amazement, saying, "How can this happen?"  Some deride the leader as a fool, a buffoon with no experience in government and even less credibility.  As if that has any effect on people who are reacting through fear and the sudden thrilling awareness that the leader has just given you carte blanche to beat the shit out of anyone who says the wrong thing.

The fear is fed by a knowledge of there being terrible societal inequities, and the sense that the problems can only be righted by a complete overturning of government.  In the words of an ordinary citizen, "Of course all the little people who had small savings were wiped out.  But the big factories and banking houses and multimillionaires didn’t seem to be affected at all.  They went right on piling up their millions.  Those big holdings were protected somehow from loss.  But the mass of the people were completely broke.  And we asked ourselves, 'How can that happen?'...  But after that, even those people who used to save didn’t trust money anymore, or the government.  We decided to have a high time whenever we had any spare money, which wasn’t often. "

Small wonder that such conditions foster distrust, suspicion, and anger.  And then, along comes someone who says he can fix all that:

And still the moderates stand around, shaking their heads in dismay, and doing little else.

Anyone who disagrees is ridiculed or denounced.  Critics are publicly humiliated and made to apologize for their audacity, and sued for defamation if they refuse.

Then the propaganda machine goes into overdrive convincing people that the entire country is going to hell if the election goes the other way:

This man who, because of his extraordinary knowledge and ability in all areas, was able to rise from nothing to his present position as the leader... despite tremendous resistance, is perhaps the only one who has the ability to master the enormous tasks, rescuing the nation at the eleventh hour from its almost hopeless situation.  Led by fate, he followed his path. It would not be the first time in history that [we were] rescued by the right man in our greatest need.

And of course, the final step is turning that anger and fear against a common enemy, someone who can act as a scapegoat.  After all, there has to be a means for directing the rage; the revolution can't be too complete, or it will destroy the very structure to which the leaders are trying to ascend.  So who's to blame?

The poor and powerless, of course.

The more economic difficulties increase, the more immigration will be seen as a burden... In this struggle... there’s only a clear either/or.  Any half measure leads to one’s own destruction.  The world [of these people] must be destroyed if humanity wants to live; there is no other choice than to fight a pitiless battle against [them] in every form.

Amazingly, people fall for it.  Fact-checking, pointing out the lies and half-truths, doesn't alter the trajectory by one millimeter.  In a direct quote that you would think would be enough by itself to wake people up: "Credibility doesn't matter.  The winner will not be asked whether he told the truth."

But still his poll numbers climb, until what looked like a ridiculous bid for attention by a narcissistic troll has become a threat to the founding principles of the entire country.

And at some point, we look around us in horror, and say, "How did we get here?"  There was no single turning point, no sudden overthrow -- just a gentle, smooth slide into being governed by the worst people in the world. 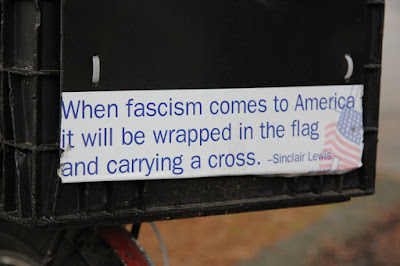 Oh, but wait.  All of the quotes and references above were taken directly from primary documents regarding the rise of Adolf Hitler and the Nazi Party in pre-World War II Germany.

Who did you think I was talking about?
Posted by Gordon Bonnet at 1:57 AM