Yesterday I ran into the latest completely bogus suggestion from the alternative medicine nuts:

Plain old water, apparently, isn't good enough, we need special water, water that is different by virtue of having lots of properties that make complete sense as long as you failed high school chemistry.

They start off with a bang:

There are only a few problems with this paragraph, to wit: 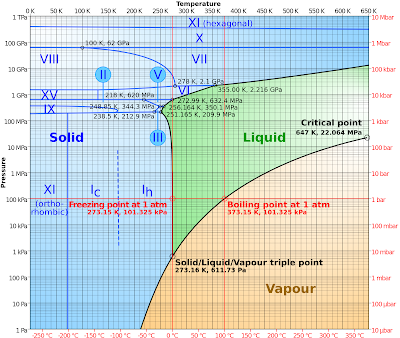 So already we're off to a great start, with one of the highest bullshit-to-text ratios I've ever seen.

Then we're told that not only is this product "structured," it's "hydrogen-enriched," so that it is "Powered to flush toxins and waste...  Activated to replicate and convert energy...  Energized for lasting alertness... [and] Optimized for better hydration."

Now, there are two ways they could add hydrogen to water; as hydrogen gas (gases are soluble in water; witness seltzer), or as hydrogen ions.

Neither would be a good idea.

If you add hydrogen gas to water, presumably under pressure (the way they make soda), then when you open the bottle, it'll fizz out, just as the carbon dioxide does when you pop the cap off a beer, which you'll probably need to do to recover from the stress of reading all of this.  The problem is, forcing hydrogen gas into water under pressure and then giving it to an unsuspecting person is problematic, from the standpoint of the fact that hydrogen gas is explosive.

Adding the hydrogen in ionic form isn't any better.  When you add hydrogen ions to water, you've created what chemists call an "acid."  The more you add, the more acidic it becomes, and the more the pH of the solution drops.  Plain old lemonade has a pH of about 5 or so, depending on how strong you make it; this corresponds to a hundred-times higher concentration of hydrogen ions than plain water (pH of 7).  Commercial vinegar has a pH of about 3, meaning it has a hundred times higher concentration still (recall that pH is a logarithmic scale; each pH point corresponds to a tenfold change in the hydrogen ion concentration).

So if the hydrogen-enriched water people are right, we should all be drinking vinegar.  Or, better yet, the sulfuric acid from your car battery, which at a pH of about 1 has a million times more hydrogen ions than pure water does.

Healthful stuff, battery acid.  Really "hydrogen-enriched."  It'd certainly flush out the toxins, rather in the way that Drano cleans out the pipes in your kitchen.  I doubt you'd feel all that "activated and optimized" afterwards, however.

Once again, we have a product that is so much snake oil -- water with some minerals added, that is then marketed as the next big thing in health.  The only benefit from this stuff is to the bank accounts of the people who are peddling it.

So there you are.  How to make water even, um, waterier.  Or something.  And how we should all give up on regular old water.

Myself, I'm thinking of switching to scotch.
Posted by Gordon Bonnet at 2:08 AM