You hear that a lot, in claims of the paranormal.   I was just sitting there, in my room, and the ghost floated in through the wall.   I was outside at night, and I saw the UFO zoom across the sky.  I was at the lake, and I saw ripples in the water, and a dinosaur's head poked out and looked at me.

In a court of law, "eyewitness testimony" is considered one of the strongest pieces of evidence, and yet time and again experimental science has shown that your sensory apparatus and your memory are flawed and unreliable.   It doesn't take much to confuse your perception -- witness how persuasive many optical illusions are -- and if you couple that with how easily things get muddled in your memory, it's no wonder that when eyewitness claims of the paranormal are presented to scientists, most scientists say, "Sorry. We need more than that."

A fascinating study published in the Journal of Neuroscience has put another nail in the coffin of our perceptual integrative systems, showing how easy it is to trigger someone to see something that isn't there in a completely convincing way.  Ron Blackwell, an epileptic, was in the hospital having tests done to see if a bit of his brain that was causing his seizures could be safely removed.  As part of the pre-surgical tests at Stanford University Hospital, his doctor, Dr. Josef Parvizi, had placed a strip of electrodes across his fusiform gyrus, a structure in the temporal lobe of the cerebrum.  And when the electrodes were activated, Blackwell saw Dr. Parvizi's face melt. 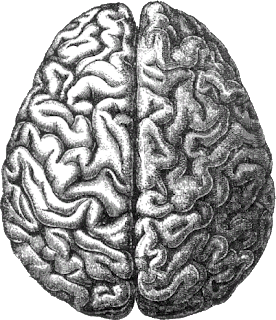 "You just turned into somebody else," Blackwell said.  "Your face metamorphosed.  Your nose got saggy, went to the left.  You almost looked like somebody I'd seen before, but somebody different."  He added, rather unnecessarily, "That was a trip."

This study has three interesting outcomes, as far as I'm concerned.

First, it shows that the fusiform gyrus has something to do with facial recognition.  I'm personally interested in this, because as I've described before in Skeptophilia, I have a peculiar inability to recall faces.  I don't have the complete prosopagnosia that people like the late great science writer Oliver Sacks had -- where he didn't even recognize his own face in a mirror -- but the fact remains that I can see a person I've met many times before in an unfamiliar place or circumstance, and literally have no idea if I've ever seen them before.  However -- and this is relevant to Parvizi's study -- other human features, such as stance, gait, and voice, I find easily and instantly recognizable.  And indeed, Blackwell's experience of seeing his doctor's face morph left other body parts intact, and even while the electrodes were activated, Blackwell knew that Dr. Parvizi's body and hands were "his."  So it seems that what psychologists have claimed -- that we have a dedicated module devoted solely to facial recognition -- is correct, and this study has apparently pinpointed its location.

Second, this further supports a point I've made many times, which is that if you fool your brain, that's what you perceive.  Suppose Blackwell's experience had occurred a different way; suppose his fusiform gyrus had been stimulated by one of his seizures, away from a hospital, away from anyone who could immediately reassure him that what he was seeing wasn't real, with no one there who could simply turn the electrodes off and make the illusion vanish.  Is it any wonder that some people report absolutely convincing, and bizarre, visions of the paranormal?  If your brain firing pattern goes awry -- for whatever reason -- you will perceive reality abnormally.  And if you are already primed to accept the testimony of your eyes, you very likely will interpret what you saw as some sidestep into the spirit world.  Most importantly, your vehement claims that what you saw was real cannot be accepted into evidence by science. Ockham's Razor demands that we accept the simpler explanation, that requires fewer ad hoc assumptions, which is (sorry) that you simply had an aberrant firing pattern occur in your brain.

Third, this study has significant bearing on the stories of people who claim to have had "spiritual visions" while under the influence of psychoactive drugs.  One in particular, DMT (dimethyltryptamine), present in such ritual concoctions as ayahuasca, is supposed to create a "window into the divine."  A number of writers, particularly Terence McKenna and Rick Strassman (the latter wrote a book called DMT: The Spirit Molecule), claim that DMT is allowing you to see and communicate with real entities that are always there, but which only the drug allows you to experience.  Consider McKenna's account of his first experience with the chemical:


So I did it and...there was a something, like a flower, like a chrysanthemum in orange and yellow that was sort of spinning, spinning, and then it was like I was pushed from behind and I fell through the chrysanthemum into another place that didn't seem like a state of mind, it seemed like another place.  And what was going on in this place aside from the tastefully soffited indirect lighting, and the crawling geometric hallucinations along the domed walls, what was happening was that there were a lot of beings in there, what I call self-transforming machine elves.  Sort of like jewelled basketballs all dribbling their way toward me.  And if they'd had faces they would have been grinning, but they didn't have faces.  And they assured me that they loved me and they told me not to be amazed; not to give way to astonishment.

A generation earlier, Carlos Castañeda recounted similar sorts of experiences after ingesting datura root and psilocybe mushrooms, and like McKenna and Strassman, Castañeda was convinced that what he was seeing was absolutely real, more real in fact than the ordinary world around us.

My response, predictably, is: of course you saw weird stuff, and thought it was real.  What did you expect?  You monkey around with your brain chemistry, and you will obviously foul up your perceptual apparatus and your ability to integrate what's being observed.  It's no more surprising that this happens than it would be if you spilled a cup of coffee on your computer, and it proceeded to behave abnormally.  If you short out your neural circuitry, either electrically (as Parvizi did) or chemically (as McKenna and others did), it should come as no shock that things don't work right.  And those altered perceptions are hardly evidence of the existence of a mystical world.

In any case, Parvizi's accidental discovery is a fascinating one, and will have wide-reaching effects on the study of perceptual neuroscience.  All of which supports what a friend of mine, a retired Cornell University professor of human genetics, once told me: the 21st century will be the century of the brain.  We are, she said, at a point of our understanding of how the brain works that corresponds to where geneticists were in 1915 -- we can see some of the pieces, but have no idea how the whole system fits together.  Soon, she predicts, we will begin to put together the underlying mechanism.  And at that point, we will be starting to develop a complete picture of how our most complex organ actually works.
Posted by Gordon Bonnet at 2:06 AM