The deaths last week of entertainment giants David Bowie and Alan Rickman brought forth a torrent of tributes, thank yous, and reminiscences of their many memorable star turns.  I will never, for example, forget Bowie's wonderfully creepy performance as the Goblin King Jareth in Labyrinth, a movie I have loved since first seeing it as a teenager: 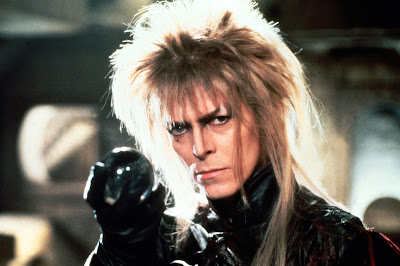 As far as Alan Rickman goes, the choices are a little overwhelming -- Sense and Sensibility, Harry Potter, Love Actually, Die Hard, Sweeney Todd, Dogma, and Blow Dry barely begin to scratch the surface -- but for me, the performance that always comes to mind is his fall-out-of-your-chair-hilarious role as the sour-tempered Alexander Dane/Dr. Lazarus in Galaxy Quest: 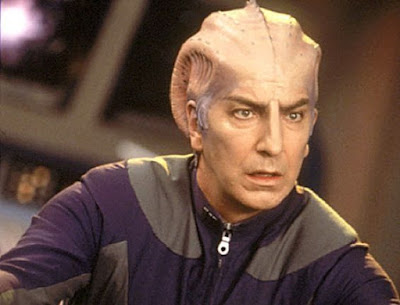 It may be a sign that I've written Skeptophilia for far too long that while everyone else was mourning the passing of two beloved entertainers, I was sitting here thinking, "How long will it be before people start claiming that their deaths were (1) faked, (2) predicted by psychics, or (3) part of a conspiracy?" And it brings me no great joy to find that my grim suspicions were correct.  Two days ago, the YouTube channel "Russianvids" posted a fourteen-minute video entitled, "David Bowie & Alan Rickman Death Hoax 100% Staged."

How do we know this, you might ask?  Well, let's start with the fact that a year to the day before David Bowie's death, there was an episode of The Simpsons wherein we hear about a cat with two different-colored eyes named "Bowie."  Add to that the Freemasons, sinister hand signs, the 911 emergency call number, the fact that the Twin Towers were destroyed thirty-three years after they were built, the fact that Jesus was crucified at age 33, and John Carpenter's movie They Live, and you have what lawyers call "an airtight case."

What about Alan Rickman?  Well, both he and Bowie "allegedly" died of cancer at age 69, and the symbol for the astrological sign of Cancer looks a little like 69: 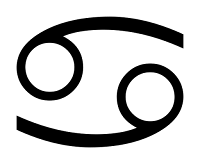 We also hear that both Rickman and Bowie made their last appearance on December 7, which is somehow significant because of the number 7 and Chaldean numerology.  Don't ask me why.

Then there was a long bit about how pretty much everyone is a Mason, presumably with the exception of the guy who owns "Russianvids."  The Masons, he says, all speak in code; "It's a big club," he says, "and you're not in it."  So I'm beginning to wonder if his obvious pissoff against the Masons might come from sour grapes.  Maybe he applied for membership to the Masons, and was turned down, or something.  He certainly sounds like he has an axe to grind.

Anyhow, at this point, my eyes were starting to glaze over.  He says several times that he's "Just Asking Questions," a ploy for sowing doubt that a friend of mine calls "JAQing off," a phrase that I sorely wish I had come up with.  He also says that people like me, who think that conspiracy theorists in general have a screw loose, are "coincidence theorists."  We think everything is a coincidence, apparently.  And honestly, he's not far wrong; I do think there are dark dealings and evil plots, but much of what happens in the world is chaos -- stuff happening for no particular reason, and some of it occurring at the same time, i.e., coincidence.  Which is, after all, what you call it when two random events coincide.

Then once again I did what I should never do, which is to look at the comments section.  I think I keep doing this because I desperately want to believe that most of my fellow humans are not raving wackmobiles, a desire that gets dashed more often than not.  For your amusement, here are a few of the comments on the video.  As always, grammar and spelling are left as-written, because you can only write [sic] so many times:

Yes!  Yes!  I see it all now!  Fake lotteries and 666 and underground cities and rising frequencies in the period of the solstice = David Bowie and Alan Rickman are still alive!  How can I not have seen that?

So yeah.  After I finished facepalming repeatedly over all this, I closed the link and sat for a while, whimpering softly and rocking back and forth.  I mean, no one would be happier than me if Bowie and Rickman were still alive; they were brilliant.  But it's gonna take more than an episode of The Simpsons and some random FrootLoop babbling about Freemasons and numerology to convince me of it.

Anyhow, that's today's dip in the deep end of the pool.  I really wouldn't advise watching the YouTube video; that's why I'm here, to kill off millions of brain cells so you won't have to.  Instead, watch Galaxy Quest and Labyrinth some time soon.  It'd be a much better tribute to the memories of two great men.  I know that's what I'm gonna do.
Posted by Gordon Bonnet at 1:43 AM