I keep wanting to avoid writing blog posts on the topic of politics, and the politicians keep not letting me.

This time it's Ted Cruz who appears in Skeptophilia based on statements from him and his campaign officials that leave me no possible conclusion other than that the whole lot of them seem like raving lunatics.

This is, by itself, not that worrisome.  Lunatics have been running for public office since time immemorial (I'm lookin' at you, Lyndon LaRouche), and mostly they have been unsuccessful.  Even though there's a flush of early support, eventually people recognize the nutjobs for what they are, and they (the nutjobs) end up getting caught on the unpleasant end of a landslide.

This time, though, it doesn't seem to be happening.  There are lots of nuts still in the running, and Ted Cruz is currently polling at 10%.  Now this may not seem like a lot, but recall that the Loony Vote is now being spread out amongst a bunch of candidates.  If any of them drop out, you can expect Cruz's support to rise.

That's despite the fact that he and his staffers keep saying things that, under other circumstances, would qualify you for a psychiatric evaluation. 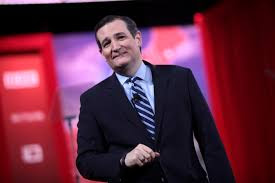 [image courtesy of photograph Gage Skidmore and the Wikimedia Commons]

Let's start with the co-chair of Cruz's campaign in Virginia, Cynthia Dunbar.  Dunbar was once a member of the Texas State Board of Education, during which time she said her sworn duty was to fix the "biblically-illiterate society" we live in.  Given the current textbook mess in Texas, it seems like she and her colleagues have achieved their aim pretty well, even though the downside is that they are promoting the teaching of a mythologically-based doctrine as if it were actual accurate history and science.

Unsurprisingly, this strategy heavily depends on making shit up.  About her support of American history texts that make it sound like Moses brought the Constitution along with the Ten Commandments when he descended from Mount Sinai, Dunbar said, "One of my favorite historians — brilliant, brilliant man — says that 94 percent of the quotes of the founding fathers contemporaneous to our nation’s founding were either directly or indirectly from holy scripture. We know what that means when we say ‘directly’ — they’re quoting scripture.  What does it mean when we say ‘indirectly’?  They were quoting men who were quoting scripture."

But this time, Dunbar is aiming higher.  She doesn't just want religion taught in public school, she wants to do away with secular education entirely:


It’s what I call the seed policy.  If you think about it, every major social issue you’re encountering as legislators actually directs back to what it talks about it in Genesis, ‘if I would put enmity between you and the seed of the woman.’  Because what happens, what is abortion?  Abortion is the destruction of the seed.  What is homosexuality?  It is the prevention of the seed.  And what is education? It is potential deception of the seed...  When we have 88 to 90 percent, which is approximately the number of the students that are being educated within our socialized education system, effectively indoctrinating our children with our own tax dollars, guess what?  We lose every other issue.  We lose life, we lose marriage — we lose all of it.  So I think this is the linchpin issue.

Now, lest you think that Dunbar is only a staffer whose ideas don't accurately reflect those of her boss, Cruz himself demonstrated his position as conductor of the Crazy Train this week with his claim that if he doesn't win, hordes of raving atheists will descend upon Arlington Cemetery and start defiling graves:


We're just steps away from the chisels at Arlington coming out to remove crosses and stars of David from tombstones.  It could happen if five liberals dominate the Supreme Court.


Right.  Because we atheists have nothing better to do than to find tombstones of the devout, and cut away every mention of religion.  And dance on the graves while doing it, probably.

What is wryly amusing about all of this is that the kind of thing Cruz is talking about -- a group of ideologues stepping in and demanding that everyone think like they do, or else -- is a sentiment you hear way more from the extremely religious than you do from the non-religious.  Most of us non-religious people like to use our free time to kick back with a beer, not in figuring out new and improved ways of oppressing everyone who disagrees with us.

But of course, "Hey, I've talked with religious people and non-religious people, and most of 'em on both sides are pretty nice," is not a talking point that gets you votes with Cruz's constituency.  Cruz's constituency thrives on fear.  If it turns out that the people they revile actually turn out to have no intention of forcing anyone else to believe anything, the whole thing collapses like a punctured balloon.

And they can't have that.  So they make up stories of deceived "seed" and atheists attacking headstones with chisels.

In my moments of yearning, I wish that once -- just once -- we could have an election where there was calm, rational discussion of the issues, followed by people voting for the candidate whose solutions to our problems seemed the most likely to succeed.  Instead, what we have is a race where all the candidates seem determined to win votes by out-wackoing all of the others.

Okay, back to writing on topics that like Bigfoot and ghosts and psychics.  At least that's a pretend world that makes me happy.
Posted by Gordon Bonnet at 2:49 AM