Nothing brings the critics howling for my immediate incarceration in a FEMA Death Camp like when I make fun of the conspiracy theorists.  It doesn't seem to matter how dumb the conspiracy theory is -- like yesterday's, wherein we heard that David Bowie and Alan Rickman are still alive, apparently because of Chaldean numerology and the fact that Matt Groening is a Freemason -- if I call these people and their claims loons, I end up getting hate mail. 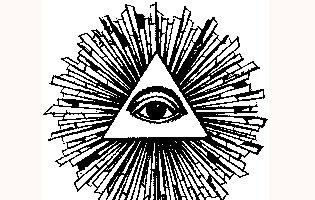 I won't bore and/or offend the studio audience with excerpts from said hate mail, much of which had grammar and vocabulary indicating IQ levels barely making double digits.  But I will point out something that I've noted before -- even if you ignore the asinine "evidence" these people quote to support their ideas, we have the troubling little problem that all of the horrible things they say are on the way never seem to happen.


Rex 84... was a secretive “scenario and drill” developed by the United States federal government to suspend the United States Constitution, declare martial law, place military commanders in charge of state and local governments, and detain large numbers of American citizens who are deemed to be “national security threats,” in the event that the President declares a “State of National Emergency.”  The plan states events causing such a declaration would be widespread U.S. opposition to a U.S. military invasion abroad, such as if the United States were to directly invade Central America.  To combat what the government perceived as “subversive activities,” the plan also authorized the military to direct ordered movements of civilian populations at state and regional levels...

The Rex 84 Program was originally established on the reasoning that if a “mass exodus” of illegal aliens crossed the Mexican/US border, they would be quickly rounded up and detained in detention centers by FEMA...

These camps are to be operated by FEMA should martial law need to be implemented in the United States and all it would take is a presidential signature on a proclamation and the attorney general’s signature on a warrant to which a list of names is attached.

Sound familiar?  The problem is, "Rex 84" was an idea that cropped up during the Reagan presidency as a "contingency plan for dealing with widespread insurrection," but got spun as the president and his cronies (especially Oliver North) wanting to suspend personal liberties, revoke the constitution, declare martial law, and keep Reagan in office beyond his term limit.

Any of that stuff happen?

How about this one:


A 'national emergency' will provide Bush the raw power he needs to cancel the elections and hold on to even greater executive power.  Over the course of his criminal and illegitimate regime, George W. Bush has assumed powers that in cases of a 'national emergency' make of him an absolute ruler beyond the powers of the Congress or the Courts.  It has all been locked up rather neatly and planned well in advance.  A 'decider' by self-proclamation, Bush conveniently 'decides' what is and what is not a 'national emergency.  He is the sole arbiter.

The 'mechanism' by which Bush consolidates all his power is called Executive Directive 51...  Signed into law on May 4, 2007, it specifies the 'procedures' to be taken in the wake of a 'catastrophic emergency' -- 'any incident, regardless of location, that results in extraordinary levels of mass casualties, damage, or disruption severely affecting the U.S. population, infrastructure, environment, economy, or government functions'...

At hearings of a congressional sub-committee in New Orleans, FEMA official Glenn Cannon acknowledged that it had been considering the use of trains to transport large numbers of people to camps and various locations around the United States.  The revelation was ominous as this use of trains is associated with Adolph Hitler's hellish Third Reich.  The camps and the mass transportation of people to them is a cornerstone in Bush's elaborate and detailed preparations for a declaration of martial law.  To every citizen of the US --whether incarcerated in a hellish concentration camp or not --the declaration of martial means but one thing: an absolute dictatorship!

The various scenarios have main points in common: Bush will, upon any pretext, declare a national emergency, cancel the elections, and impose martial law.  With martial law comes absolute power, a ruthless crack down on dissent, mass arrests and mass incarcerations.  A 'pre-text' is never an obstacle to would-be dictators.

That was a hysterical exposé from a guy who calls himself "The Existentialist Cowboy," written in May of 2008.  And at the risk of being repetitive, did any of that happen, either?

Look, it's not that I don't think evil people exist, that bad stuff can happen, that governments can turn into dictatorships.  Even the shallowest knowledge of history proves otherwise.  And I think awareness, intelligent discussion, and access to information are the surest safeguards against these sorts of things ever happening again.

But fer cryin' in the sink, nothing is accomplished by evidence-free fear talk of conspiracies (Masonic or otherwise), FEMA death camps (complete with guillotines), and top-secret communiqués from super-evil brilliant Illuminati overlords who are so top-secret-super-evil-brilliant that a raving wingnut like Alex Jones can see right through them.

And if that makes me a KoolAid-drinkin'-sheeple, then so be it.
Posted by Gordon Bonnet at 2:08 AM