Defining marriage for everyone else

My mom was a devoutly Christian woman, a staunch Roman Catholic whose go-to strategy for difficult times was "Ask the Holy Spirit for help."  She rarely missed church, read the bible avidly, and taught Wednesday afternoon sixth grade catechism classes for years.

Despite her deeply-held religious beliefs, she had one other strong belief that stands out in my memory.  She used to phrase it as, "My rights end where your nose begins."  When someone she knew did something that was against the moral code by which she lived, she would shrug and say, "That's between them and the lord."  And for her, that ended it, unless it was to add, "None of my business."

Which is an attitude I would love to see in more religious folks these days.  Live according to your own morals; don't expect anyone else to conform to them.  What others do is none of your business.

And that especially extends to what consenting adults do in the privacy of their own bedrooms.

The desperation of highly religious people to control who has sex, how, and with whom reached some kind of apogee a couple of days ago when David Fowler of the Family Action Council of Tennessee filed a lawsuit that would stop the state from issuing all marriage licenses until the Obergefell v. Hodges decision, which legalized same-sex marriage in the United States, is overturned.

Yes, you read that right.  Fowler would prefer to have every couple who would like to get married in the state of Tennessee denied a marriage license than to see a single LGBT couple granted one.

Astonishingly, state lawmakers are already lining up behind Fowler's suit.  Representative Susan Lynn has sponsored a resolution in support of what Fowler and FACT are trying to do.  "I have dozens of sponsors, and the message of my resolution is clear,” she claimed.  "We as a state have been violated, and we expect the doctrine of separation of powers and the principles of federalism reflected in our Constitution to be upheld."

Can we be clear on something, here?  This is not about federalism and the Constitution.  This is about sledgehammering religious views on what is an acceptable marriage into law, effectively abrogating the separation of church and state in the process.

And at its base, it's all about the fact that these people think that gay sex is icky.  What other possible justification can there be?  How does the fact of two gay men getting a marriage license have any effect at all on my (heterosexual) marriage?  It doesn't change the definition of my marriage.  It merely allows them to decide on the definition of theirs.

And it's not like the biblical definition of marriage is all that clear in any case. 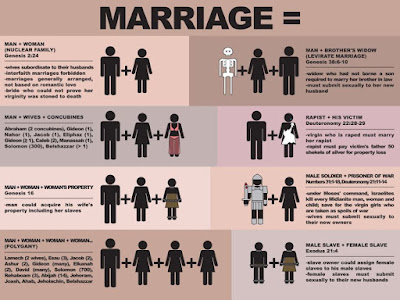 The stance of "I believe this, so you have to act in accordance to those beliefs whether you accept them or not" is the hallmark of extremism.  Interesting, isn't it, that the same Religious Right who would love nothing more than to halt same-sex marriage and mandate that creationism is taught in public schools are the same ones who rail against the extremist Muslims for basically doing the same sort of thing.  In Saudi Arabia, you can be flogged and imprisoned for drinking alcohol -- whether you're Muslim or not.

Explain to me how this is different from what David Fowler and his cronies in Tennessee are doing.

Fowler et al. are perfectly within their rights to disapprove of homosexuality.  They can believe that the bible is 100% literally true, internal contradictions and all.  They can cherry-pick the prohibitions from Leviticus they like, and ignore the ones they don't (such as all of the dietary restrictions).  No one, honestly, cares what they believe.  It's a free country, and you're allowed to practice whatever religion you choose, or (fortunately for me) none at all.

But when you start demanding that the terms of that religion become the law of the land, you are automatically in the wrong.

Sorry, Mr. Fowler.  Your rights end where my nose begins.
Posted by Gordon Bonnet at 1:51 AM