My lack of technological expertise is fairly legendary in the school where I work.  When I moved  this year into a classroom with a "Smart Board," there was general merriment amongst students and staff, along with bets being made on how long it would take me to kill the device out of sheer ineptitude.

It's January, and I'm happy to say that the "Smart Board" and I have reached some level of détente.  Its only major problem is that it periodically decides that it only wants me to write in black, and I solve that problem the way I solve pretty much any computer problem: I turn it off and then I turn it back on.  It's a remarkably streamlined way to fix things, although I have to admit that when it doesn't work I have pretty much exhausted my options for remedying the problem.

Now, however, I've discovered that there's another way I could approach issues with technology: I could hire a witch to clear my device of "dark energy." 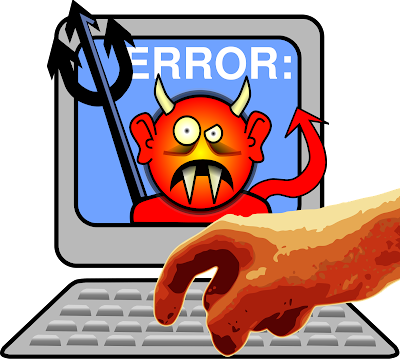 I found this out because of an article in Vice wherein they interviewed California witch and ordained minister Joey Talley, who says that she accomplishes debugging computers by "[placing] stones on top of the computer, [clearing] the dark energy by setting an intention with her mind, or [cleansing] the area around the computer by burning sage."

Which is certainly a hell of a lot easier than actually learning how computers work so you can fix them.

"I just go in and work the energy," Talley said.  "And there are different stones that work really well on computers, chloride [sic] is one of them.  Also, some people really like amethyst for computers.  It doesn’t really work for me, but I’m psychic.  So when I go into the room where somebody’s computer is, I go in fresh, I step in like a fresh sheet, and I’m open to feel what’s going on with the computer.  Everything’s unique, which is why my spell work changes, because each project I do is unique...  Sometimes I do a magic spell or tape a magic charm onto the computer somewhere.  Sometimes I have a potion for the worker to spray on the chair before they sit down to work. Jet is a stone I use a lot to protect computers."

So that sounds pretty nifty.  It even works if your computer has a virus:


I got contacted by a small business owner in Marin  County.  She had a couple of different viruses and she called me in.  First, I cast a circle and called in earth, air, fire and water, and then I called in Mercury, the messenger and communicator.  Then I went into a trance state, and all I was doing was feeling.  I literally feel [the virus] in my body. I can feel the smoothness where the energy’s running, and then I feel a snag. That’s where the virus got in...  Then I performed a vanishing ceremony.  I used a black bowl with a magnet and water to draw [the virus] out.  Then I saged the whole computer to chase the negativity back into the bowl, and then I flushed that down the toilet.  After this I did a purification ceremony.  Then I made a protection spell out of chloride [sic], amethyst, and jet.  I left these on the computer at the base where she works.

The virus, apparently, then had no option other than to leave the premises immediately.

We also find out in the article that Talley can cast out demons, who can attach to your computer because it is a "vast store of electromagnetic energy" on which they like to feed, "just like a roach in a kitchen."

The most interesting bit was at the end, where she was asked if she ever got mocked for her practice.  Talley said yes, sure she does, and when it happens, she usually finds that the mockers are "ornery and stupid."  She then tells them to go read The Spiral Dance and come back when they have logical questions.  Which sounds awfully convenient, doesn't it?  I've actually read The Spiral Dance, which its fans call "a brilliant, comprehensive overview of the growth, suppression, and modern-day re-emergence of Wicca," and mostly what struck me is that if you didn't already believe in all of this stuff, the book presented nothing in the way of evidence to convince you that any of it was true.  Put another way, The Spiral Dance seems to be a long-winded tribute to confirmation bias.  So Talley's desire for "logical questions" -- such as "what evidence do you have of any of this?" -- doesn't really generate much in the way of answers that a skeptic from outside the Wiccan worldview could accept.

But hell, given the fact that my other options for dealing with computer problems are severely constrained, maybe the next time my "Smart Board" malfunctions, I'll wave some amethyst crystals around.  Maybe I'll even do a little dance.  (Only when there's no one else in the room; my students and colleagues already think I'm odd enough.)

Then, most likely, I'll turn it off and turn it back on.  Even demons won't be able to stand up to that.