That's a lesson that could use reinforcement, because there is a regrettable tendency on the part of a lot of folks to jump from "this is strange and we don't understand it" to "this must be evidence of (fill in the blank: aliens, ghosts, telepathy, any of a number of cryptids, any of a number of gods)."  Science, on the other hand, is perfectly comfortable with not knowing the answer.  If you don't know the answer, you continue to look.

And continuing to look, after all, is what science is.

As an excellent example of this -- and an excellent example as well of the right attitude in science -- consider Phil Plait's article over at Slate entitled, "I'm Still Not Sayin' Aliens.  But This Star is Really Weird."  In it, he gives further consideration to the star KIC 8462852, now more euphoniously referred to as "Tabby's Star" after Tabetha Boyajian, the astronomer who led the team that discovered its odd behavior.  Tabby's Star has been in Skeptophilia before, back in October of 2015 when the news of its peculiarities became public.  This star shows dramatic and irregular fluctuations in brightness, which (to date) have not been convincingly explained.  The most popular explanation, at least amongst the astronomers, was that Tabby's Star was surrounded by a huge swarm of comets that periodically blocked the light from it, causing an apparent dimming.

Now, I'm not an astronomer myself, merely a star-watching dilettante, but that never sounded all that plausible to me.  Considering that a transit of Jupiter across the Sun would only cause a 1% dimming in brightness as observed from outside the Solar System, and the brightness fluctuations for Tabby's Star reach a mind-boggling 22%, that would have to be one big-ass comet swarm.  But as the other explanations I heard included aliens building a Dyson sphere around the star, I wasn't gonna call the comet swarm hypothesis far-fetched.

But it gets weirder.  Bradley Schaefer, an astronomer at Louisiana State University, has found that not only does the light from Tabby's Star get occluded by something, triggering an irregular rise and fall in brightness in the short term, it has on average dropped in brightness by 20% over the past 120 years! 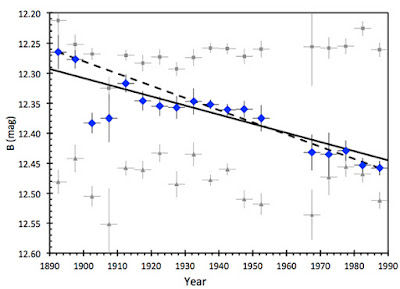 
That’s … bizarre. Tabby’s Star is, by all appearances, a normal F-type star: hotter, slightly more massive, and bigger than our Sun.  These stars basically just sit there and steadily turn hydrogen into helium.  If they change, it’s usually on a timescale of millions of years, not centuries. Schaefer examined two other similar stars in the survey, and they remained constant in brightness over the same time period.

The long-term fading isn’t constant, either.  There have been times where the star has dimmed quite a bit, then brightened up again in the following years. On average, the star is fading about 16 percent per century, but that’s hardly steady.

So it appears Tabby’s Star dims and brightens again on all kinds of timescales: hours, days, weeks, even decades and centuries.

Again. That’s bizarre. Nothing like this has ever been seen.

Plait emphasizes that he's not saying this is aliens, but adds, a tad reluctantly:


I’d be remiss if I didn’t note that this general fading is sort of what you’d expect if aliens were building a Dyson swarm.  As they construct more of the panels orbiting the star, they block more of its light bit by bit, so a distant observer sees the star fade over time.

He does, however, add the caveat that if this is an alien civilization building a Dyson sphere, they're working at a breakneck pace.  They'd have to generate and install panels with a total surface area of 750 billion square kilometers -- 1,500 times the surface area of the Earth -- in a little over a hundred years in order to have that effect.

So Tabby's star is a mystery.  Which means it's cool, and there are gonna be lots of astronomers and astrophysicists working to try to figure out what's going on.