It is a general rule of human behavior that it is way easier to make people afraid of something than it is to convince them that what they fear is harmless.

This principle works on all scales.  The dubiously-ethical "Little Albert experiment," performed back in 1920 by John B. Watson and Rosalie Raynor, showed that you can classically condition humans with no difficulty at all -- the test subject, a nine-month-old nicknamed "Little Albert," was conditioned to fear white rats.  It worked all too well.  The baby developed a fear not only of white rats, but other furry objects (including a teddy bear).

When the test subject was tracked down years later, he was found to have an irrational phobia of dogs.

You can see this same tendency working all the way up to a conditioned fear of "the other" -- other races, ethnic groups, religions, political parties -- a fear that politicians frequently capitalize on to galvanize their supporters, and which once instilled is almost impossible to eradicate.

Even knowing this, I was pretty pissed off by the reactions I saw to a recent study that was highlighted in Phil Plait's wonderful blog Bad Astronomy -- Plait's article was titled, "Gardasil: More Anti-Vax Nonsense Collapses Under the Gaze of Reality."  In it, we hear about a study that did a large-sample-size test of side effects from the anti-HPV vaccine Gardasil, and found...

... nothing.  Nada.  None of the horrible side effects you hear from the anti-vaxxers, which include complex regional pain syndrome and postural orthostatic tachycardia.  Any incidence of disorders following the administration of the vaccine was no higher than the background rate for unvaccinated teens.

Add to that the fact that Gardasil prevents infection by HPV, which is directly linked to cancer of the throat, cervix, penis, and vagina.  Of these, cervical cancer is the most common; of the 12,900 new cases of cervical cancer diagnosed each year, an estimated 4,100 women will die of it within three years of diagnosis.  So, no common adverse side effects from Gardasil, and the benefit of protecting your children from dying of cancers that are largely preventable.  No brainer, right?

Apparently not.  Here's a selection of responses I saw to the Phil Plait article:

And so on and so forth.  What, does the research only convince you when something is unsafe?

Let me put this as plainly as I know how.  There is no evidence that vaccinations are dangerous, and that they increase your likelihood of any of the various disorders that anti-vaxxers want you to believe are a result.  There have been repeated large-scale studies by different researchers in different research facilities that have confirmed this result over and over.  Further, do you really want to go back to the day when people died of measles, typhoid, and diphtheria, and those who survived polio were sometimes confined to an iron lung for the rest of their lives?  We now can prevent all of those diseases, and have for the first time come up with a vaccination that prevents cancer. 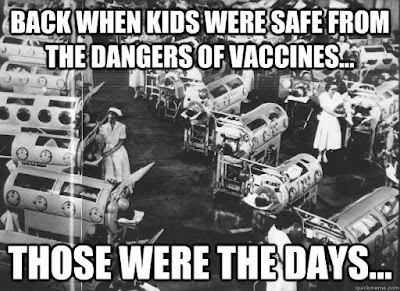 To refuse to have your children protected against these deadly diseases is tantamount to child endangerment.

And I would like it if, for once, people would overcome their tendency to believe fears more strongly than reassurances, and accept what the scientists have been saying for years.
Posted by Gordon Bonnet at 2:07 AM