One of the most common tropes that you hear in anti-evolution arguments is what they call the "problem of information."  The idea is that random mutations can't create new information -- perhaps they can modify the information that is already there, but evolution provides no way to generate novel genes (and therefore novel structures).

As Royal Truman put it over at the True Origin Archive:


Selection inevitably removes information from the gene pool... [C]onsider regulatory genes that switch other genes ‘on’ or ‘off’.  That is, they control whether or not the information in a gene will be decoded, so the trait will be expressed in the creature.  This would enable very rapid and ‘jumpy’ changes, which are still changes involving already created information, not generation of new information, even if latent (hidden) information was turned on...   Now, it is questionable whether any mutation can be shown to lead to some kind of improvement without causing deleterious functioning of some processes already encoded on the DNA (this is very different from the question whether one mutation could allow some members to temporarily survive some drastic environmental change).   Presumably a very bad mutation leads to death, weeding out such mutated genes from that species’ gene pool forever.

Despite Truman's confidence and the apparent sophistication of his argument -- he spends a long time, for example, wandering about in the realm of Bayesian information theory to support his views -- almost all biologists consider this view dead wrong.  As an example, consider preaptation  -- the evolution of a gene (and its gene product) in one context, and a small change in the gene resulting in a novel gene product with a completely different function.

The most striking instance of preaptation is the class of proteins called crystallins, which make up the lens of the vertebrate eye.  This is wryly amusing given the fact that the eye is one of those structures that the anti-evolutionist types call "irreducibly complex," even though as Richard Dawkins writes:


[P]lausible intermediates are not only easy to imagine: they are abundant all around the animal kingdom.  A flatworm has an eye that, by any sensible measure, is less than half a human eye.  Nautilus (and perhaps its extinct ammonite cousins who dominated Paleozoic and Mesozoic seas) has an eye that is intermediate in quality between flatworm and human.  Unlike the flatworm eye, which can detect light and shade but see no image, the Nautilus 'pinhole camera' eye makes a real image; but it is a blurred and dim image compared to ours.  It would be spurious precision to put numbers on the improvement, but nobody could sanely deny that these invertebrate eyes, and many others, are all better than no eye at all.

Another blow to the "irreducible complexity" of the eye was dealt a blow when it was found that the transparent proteins in the lens are related genetically to a gene that produces heat-shock proteins, proteins produced during various types of physical stress (including thermal stress, which is what gave them their name).  One small mutation in the gene for heat-shock proteins creates a gene that makes a clear protein that can be used for focusing light. 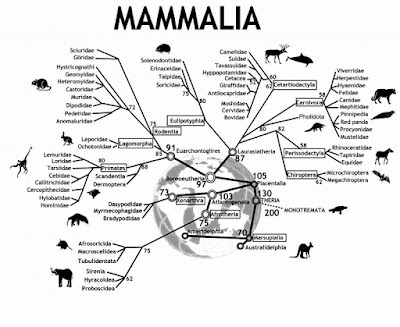 Even with examples like this, people of Truman's stripe aren't convinced.  They argue that okay, you can modify what's already there, but no one has been able to show how mutations create anything genetic that is genuinely new.

Until two days ago.

A team led by Jorge Ruiz-Orera of the Hospital del Mar Research Institute of Barcelona, Spain published a paper in PLOS-One called, "Origins of De Novo Genes in Humans and Chimpanzees," in which they show exactly how this can happen.  In their groundbreaking analysis, they have basically given a death blow to the so-called "problem of information."  Ruiz-Orera et al. write:


For the past 20 years scientists have puzzled over a strange-yet-ubiquitous genomic phenomenon; in every genome there are sets of genes which are unique to that particular species i.e. lacking homologues in any other species.  How have these genes originated?  The advent of massively parallel RNA sequencing (RNA-Seq) has provided new clues to this question, with the discovery of an unexpectedly high number of transcripts that do not correspond to typical protein-coding genes, and which could serve as a substrate for this process...  We have found thousands of transcripts that are human and/or chimpanzee-specific and which are likely to have originated de novo from previously non-transcribed regions of the genome.  We have observed an enrichment in transcription factor binding sites in the promoter regions of these genes when compared to other species; this is consistent with the idea that the gain of new regulatory motifs results in de novo gene expression.  We also show that some of the genes encode new functional proteins expressed in brain or testis, which may have contributed to phenotypic novelties in human evolution.

I think they show admirable restraint in not taking at least a sidewise swipe at the Intelligent Design advocates.  But in their discussion, even the most diehard IDer couldn't fail to catch the drift of their last statement:


Our results indicate that the expression of new loci in the genome takes place at a very high rate and is probably mediated by random mutations that generate new active promoters.  These newly expressed transcripts would form the substrate for the evolution of new genes with novel functions.

Which I think is about as close to a "boo-yah!' as is allowed in an academic paper.

The history of evolutionary research has been a long series of struggles against objections from individuals who have a vested interest -- usually religious in nature -- in the evolutionary model being wrong.  This assume-your-conclusion stance is pretty transparent to those of us who subscribe to the scientific method as a means for understanding, but their certainty has been remarkably resistant to attack.  Whether the research by Ruiz-Orera et al. will convince anyone remains to be seen, but at least it does one thing; it shows up yet another facet of their argument as specious.

And that, after all, is progress.  Or as Ruiz-Orera might put it, "new information."
Posted by Gordon Bonnet at 2:15 AM