A few days ago, a loyal reader and frequent contributor of topics to Skeptophilia sent me an article about a cryptid I'd never heard of before.  They're called the "Bagwajiwinini," or the "Little People of Minnesota."  This discovery was of particular concern to the reader who sent it, because he lives in Minnesota, so he was understandably interested in having me look into it.

According to the article, the Bagwajiwinini are "2'-3' in height, with a greenish complexion...most likely from the heavy ingestion of plants containing chlorophyll."  Because this is obviously what happens to animals that eat plants, as witnessed by all of the green cows, deer, bunnies, and vegetarians you see walking around.  The article then goes on to tell us that "They live in a darkened world of thick Bracken Fern canopies that can grow up to 3 ft. high.  This enables the Bagwajiwinini to freely roam among forest and it's [sic] edges without detection.  There have been many stories associated with the Bagwajiwinini, including the possibility of human abduction."

Which brings up the inevitable question of how three-foot-tall green dudes can abduct a full-sized human.  I mean, something of the like worked in Gulliver's Travels, but as I recall, Gulliver had assisted in his own capture by falling asleep at an inopportune moment.  So it's hard to see how skulky little fern-canopy-dwellers could successfully overcome an ordinary-sized human.

Of course, there's also the possibility that they mesmerize their victims with music, in the fashion of the Pied Piper.  Ron Shaw, investigator for Cryptid Four Corners International, tells us about "an Ojibwa woman who stated that on one occasion, her son saw a Bagwajiwinini playing a flute.  Another witness, an Ojibwa man, stated that he and his son were hunting, and at point were separated.  The father tracked his son to a root system of a tree where only his legs were sticking out.  He pulled his son free...and told his father that the Bagwajiwinini captured him and were taking him underground."

So that's sinister enough.  I can see why C4CI is investigating, although I do have to wonder why they chose this time of year.  Anywhere in the north is a bit sketchy in midwinter, but northern Minnesota in January... well, let's just say that there are body parts that I'd really prefer not to freeze off.  But I admire their dedication, particularly when you consider the case of Kory Kelly, a 39-year-old hunter who went missing in October, and was later found dead of hypothermia.  This is tragic enough, but the folks from C4CI think that Kelly vanished because he was...

You can understand why the reader from Minnesota was concerned when he found the article.  Worse still is the photograph of a Bagwajiwinini that someone took: 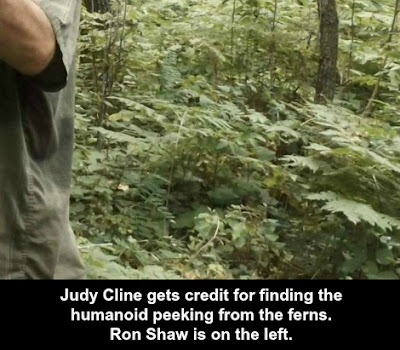 See it?  Neither did I, until the C4CI people helpfully zoomed in on it: 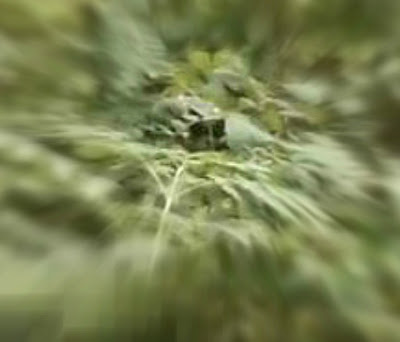 Can't miss it when I tell you what's there, can you?

Predictably, my guess is that what we're looking at is a combination of a Native legend, wishful thinking, and pareidolia.  As usual.  I'm thinking you're perfectly safe if you live in Minnesota from anything besides frostbite, and that Kory Kelly's tragic death was from hypothermia, not Little People Abduction.  Still, I've been wrong before.  If running around in sub-zero temperatures looking for creatures that probably aren't there floats your boat, then knock yourself out.  Just remember to wear your thermal underwear.
Posted by Gordon Bonnet at 1:52 AM