Opting out of tribalism

Well, it's 2016, and given that this is an election year, seeing the turn of the calendar page makes me want to crawl in a hole and pull a blankie over my head until the second week of November.

It's not the political advertisements, nor the signs that spring up like fungus after a summer rain all along the roadside.  Those are bad enough, of course.  What I hate most of all about election years is the nasty vitriol a lot of people spew not only at candidates they don't like, but at the slice of the citizenry who support the opposite political views.

Let me give you an example, in the form of something a cousin of mine posted yesterday on Facebook: 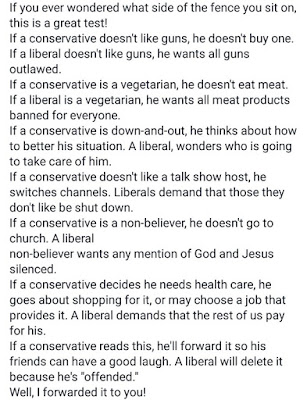 Now, let me say right up front that my cousin posted this as a bad example, and followed it up with the following trenchant comment:


Almost all the people I know want mostly the same thing and care about the same things.  In fact, unless you asked, you wouldn't know what political party they belonged to. It's the stereotype that people are angry with, yet the individual people living their daily lives are very very rarely the stereotypical enemy we are told they are.

Which is it exactly.  Any time you paint your own tribe as the honorable and courageous and compassionate and rational ones, and the other tribe as the evil and devious and cowardly and two-faced ones, you are subscribing to a lie that would be shown up for what it is if you simply took the time to talk to a few of the people you're tarring with that brush.

But can't you find liberals who are this determined to foist beliefs on everyone?  Who, for example, are vegans and would like to ban all meat products?  Sure you can.  In fact, I know one.

One.  Out of all of the liberals I know, I know one who is so off the beam about the issue that she would like nothing better than to make sure no one ever eats meat.  And the conservatives I know?  I know one or two who are irrational, closed-minded xenophobes.  But by far, the majority of the people on both sides of the aisle just want what everyone wants -- a good job, a secure home, a safe place to raise children.  We may disagree on how to achieve those goals, but the number on either side who want to get there by shutting down all dissent by any means are (fortunately) few in number.

So I'm going to make a plea with all of you, whether you are conservative, liberal, or completely apolitical.  Stop posting blind rhetoric, because it is factually incorrect nearly 100% of the time.  Take the time to listen to people you disagree with.  Chances are, you'll find they're just as human as you are, even if you don't see eye to eye on the issues.  Stop demonizing people who belong to a different political party, ethnic group, or religion.  Those kind of blanket statements are not only unfair, they serve as a road block to thinking.  The kind of foolishness exemplified by the post from my cousin accomplishes nothing but dividing us, stopping dialogue and further fracturing the country along ideological lines.

I'd like to ask each of you to commit  for the next eleven months to backing off on the fist-shaking and saber-rattling, and (especially) think about what you post, forward, or "like" on social media.  Just remember what Oliver Wendell Holmes said: "No generalization is worth a damn.  Including this one."
Posted by Gordon Bonnet at 2:55 AM