Sometimes I react differently to scientific discoveries than ordinary people do.

A few days ago, I read a press release from Caltech with some exciting news for astronomy buffs -- the discovery of good evidence of a ninth planet (a real ninth planet, sorry, Pluto) out in the Kuiper Belt, the region in the far reaches of the Solar System that was thought to be populated mostly with comets.

The planet has yet to be sighted, but the two researchers who found evidence of its existence, Konstantin Batygin and Mike Brown, say their argument based in celestial mechanics is sound.  They got the idea when they discovered that six different distant objects with highly elliptical orbits all had their ellipses oriented the same way -- a highly unlikely arrangement to occur by chance, as the alignment of elliptical orbits precesses over time.

"It's almost like having six hands on a clock all moving at different rates, and when you happen to look up, they're all in exactly the same place,"  Brown said.  "The odds of having that happen are something like 1 in 100.  But on top of that, the orbits of the six objects are also all tilted in the same way -- pointing about 30 degrees downward in the same direction relative to the plane of the eight known planets. The probability of that happening is about 0.007 percent.  Basically it shouldn't happen randomly.  So we thought something else must be shaping these orbits."

So basically, they proposed that a new (and as yet, unnamed) ninth planet is locking those objects into their orbits.  Using that as their starting point, they ran a simulation -- and it matched the known objects' orbits perfectly.  "We plotted up the positions of those objects and their orbits, and they matched the simulations exactly," said Brown. "When we found that, my jaw sort of hit the floor." 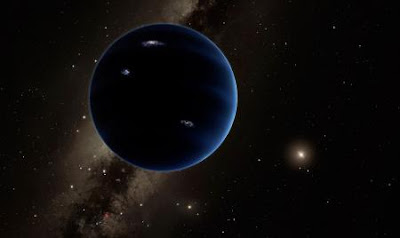 Artist's conception of the new ninth planet.  The little yellow dot in the lower right is what the Sun would look like from out there.

Cool, no?  Which makes my reaction even weirder, because when I read this, instead of being excited by the new discovery, I did a facepalm and said, "Oh, dear lord, no.  This is going to bring all of the Nibiroonies howling out of their well-deserved obscurity."

If you are fortunate enough not to know about Nibiru, allow me to inform you that it is the fabled ninth planet that is the home of the Annunaki, better known as our Alien Overlords.  Nibiru supposedly only visits the inner solar system every few thousand years or so, which explains why you see so few Annunaki around these days despite the fact that our distant ancestors apparently knew all about them.

Evidently the "it's a myth" explanation never occurs to these people.

So you can see why I immediately thought, upon reading the Caltech press release, that the wingnuts who believe in Nibiru would latch onto this like a leech on a swimmer's ankle.  And sure enough, over at Area51.org, we had an article appear yesterday with the headline, "Did Caltech Researchers Just Find Planet X (Nibiru)?"

A giant planet in a highly elongated orbit—that’s exactly what the fabled Planet X was supposed to be. Nibiru, as the ancient Sumerians called it, home of a race of aliens, the Anunnaki, that came here and genetically modified our ancestors. The planet described in these texts is giant, and only comes near Earth about every 3,600 years because of its, well, bizarre, highly elongated orbit... This hidden history, which is explained in detail in the books of Zecharia Sitchin, has been dismissed by skeptics in one simple stroke: where, pray tell, is this giant extra planet?

It appears as though Caltech has just answered that question...

Scientists have previously found evidence for a missing planet in the solar system, but this new finding is more substantial—and it’s the first time researchers have suggested that the planet is “giant”, just as foretold thousands of years ago.

Yes, well, that's all very nice, but there are just a few problems with all this.

Second, the new planet is estimated to have an orbital period of 15,000 years, not 3,600, as the estimable Mr. Sitchin claims.  So even if it did come into the inner Solar System (which it doesn't), it would only be at 15,000 year intervals, which seems kind of inconvenient if you are acting as planetary overlords.  "You guys play nice!  If not, there'll be hell to pay!  We'll be back to check in... um... fifteen millennia."

As if that wasn't enough, we have the fact that third, the planet is estimated to be the size of Neptune, making it a gas giant with no solid surface.  Any Annunaki who were comfortable out there -- on an ice-cold planet, probably made largely of ammonia and methane, in perpetual darkness -- wouldn't do so well here on clement, solid Earth.

Oh, wait!  The Annunaki are super-powerful and magical!  Never mind.

So anyway.  These people never let little things like "facts" stand in their way, so I'm pretty sure that all of this will make exactly zero difference to the Nibiroonies.  Once you've accepted "no evidence except for a lot of self-contradictory ancient texts" as your basis of understanding, you really don't have much in the way of solid ground to stand on.

But at least you might now understand my reaction.  No insult intended to Batygin and Brown, who have done stellar work (*rimshot*), but given the woo-woos I contend with here on Skeptophilia on a daily basis, you can see why I greeted the Caltech press release with less than wild shouts of acclamation.
Posted by Gordon Bonnet at 2:16 AM