This is your brain on creativity

As a writer and a musician, I am intensely interested in the neurology of the creative process, and especially how creativity interfaces with emotion.  For me, both writing and music are about evoking emotion; even, to some extent, non-fiction writing, which in a lot of ways is supposed to be dispassionate and emotionless.  After all, why do people choose particular academic fields to pursue?  My own favored area of study -- population genetics -- I delved into for one reason: because the ideas are cool, and messing around with maps of allele frequencies makes me happy.

Okay, I know I'm a little odd.  Not that this will be a great shock to regular readers of this blog.

In any case, emotion is important, and in my opinion a writer of fiction, a musician, or an artist that fails to evoke emotion has, in large part, failed entirely.  The two parts of the generative process -- creativity and emotion -- are inextricably linked.

So I was really excited (although unsurprised) by the findings of a paper in this week's issue of Nature entitled, "Emotional Intent Modulates The Neural Substrates Of Creativity: An fMRI Study of Emotionally Targeted Improvisation in Jazz Musicians."  The paper describes a study by Malinda J. McPherson, Frederick S. Barrett, Monica Lopez-Gonzalez, Patpong Jiradejvong, and Charles J. Limb, of Johns Hopkins School of Medicine, that found that there is a neurological underpinning for the expression of emotion in creative pursuits.

"The bottom line is that emotion matters," said Charles Limb, MD, senior author of the study.  "It can’t just be a binary situation in which your brain is one way when you’re being creative and another way when you’re not.  Instead, there are greater and lesser degrees of creative states, and different versions.  And emotion plays a crucially important role in these differences."

The researchers took twelve jazz pianists, and showed them photographs of individuals expressing negative, positive, and neutral emotions.  Then, they asked the pianists to improvise a piece that expressed the emotion of the photograph they were shown. 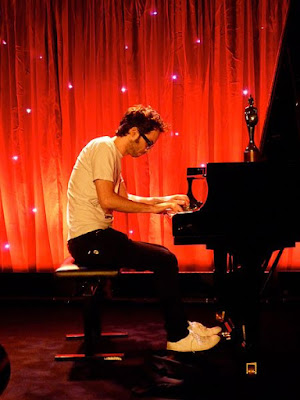 [image courtesy of photographer Zoe Caldwell and the Wikimedia Commons]

The results were fascinating.  The researchers write:


When we examined the functional neuroimaging results, we found that the creative expression of emotions through music may engage emotion-processing areas of the brain in ways that differ from the perception of emotion in music.  We also observed a functional network involved in creative performance, and the extent of activation and deactivation in this network was directly modulated by emotional intent.  Our viewing controls showed that there were few significant differences between neural activity in response to any of the visual cues, therefore the differences between improvisation conditions are the result of the creative expression of emotion through music, rather than a direct response to the visual stimuli.  These results highlight that creativity is context-dependent, and emotional context critically impacts the neural substrates of artistic creativity.

Which is incredibly cool, but (for me) unsurprising, given my sense that creativity and emotion are impossible to tease apart.  My main creative world is in writing -- I am a musician, but not a composer -- and I have found myself so emotionally involved with scenes I'm writing that I can lose myself within them.  The creative enterprise, in a lot of ways, is very primal, seated in a part of the brain not really under conscious control.  This study showed that for people who express through creating music, the process can be equally visceral:


Creativity is not a single unified set of mental processes or abilities. While some types of creativity may require intense concentration and thought, other forms of creativity, such as jazz improvisation, may be predicated on "letting go..."   [T]his study shows that the impulse to create emotionally expressive music may have a basic neural origin: emotion modulates the neural systems involved in creativity, allowing musicians to engage limbic centers of their brain and enter flow states.  The human urge to express emotions through art may derive from these widespread changes in limbic, reward, and prefrontal areas during emotional expression.  Within jazz improvisation, certain emotional states may open musicians to deeper flow states or more robust stimulation of reward centers.

So the whole thing is fascinating.  It's nice to understand a little more about what happens in the brains of creative people; until recently, the whole idea of creativity has seemed to reside outside of the realm of science.  The fact that we're now zeroing in on how creativity, emotion, and the physiology of the brain are intertwined...