Waiting out the whiners

So now the members of Yokel Haram currently occupying the headquarters building of the Malheur National Wildlife Refuge in Burns, Oregon have decided to further erode any support they may have had by rifling through 4,000 irreplaceable artifacts of the Paiute Tribe, and bulldozing a line around the refuge building's property without any consideration of archaeologically sensitive sites.

"I’ve gotten calls from ranching families who support the tribe," tribe chairperson Charlotte Roderique said.  "They’ve seen the [Paiute] campsites out there.  They’ve been in that area and they know where things are.  You can’t go and bulldoze things.  I don’t know what these people are doing, if they are doing things to just get a rise or to be martyr—all they are doing is making enemies out of the people they professed to support."

One of the occupiers, LaVoy Finicum, posted a video of himself pawing through the artifacts, and tried to cast it as concern over how the artifacts were being stored.  "We want to make sure these things are returned to their rightful owners and that they’re taken care of,” Finicum said.  "This is how Native Americans’ heritage is being treated.  To me, I don’t think it’s acceptable."

The Natives themselves don't seem to have that attitude.  "I got a question for the world," said Jarvis Kennedy, Burns Paiute Tribal Council member.  "What would happen if it was Natives out there taking over the building?  Or any federal land?  What would the outcome be?  Think about it.  What would happen?  Would they let us come into town to get supplies?  We as Harney County residents can stand on our own feet.  We don’t need some clown to come in here and stand up for us.  We survived without them before, we'll survive without them when they're gone.  So they just need to get the hell out.  We didn't ask for them here, we don't want them here.  They say they don't want to bother the community, but our kids are sitting at home right now when they should be at school.  They're scaring our people.  They need to go home.  We don't need them." 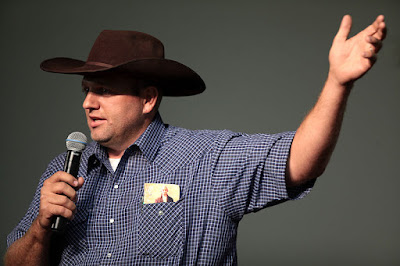 Kind of unequivocal, isn't it?  Of course, statements from Paiute leaders are likely to have no effect, given the fact that Ammon Bundy and his crew seem to have the idea that laws are more like strongly-worded suggestions, and any time someone says "You can't do that," it directly contravenes the Constitution, and probably the Word of God as well.

The thing is, their whole stance is a sham right from the outset.  Their claims that they're doing what they do because they're concerned about the rights of citizens to their own property are shown as the lies they are by their actions.  Jacqueline Keeler, over at Indian Country Today Media Network, told us how much concern these people have for others' property:

Carla Burnside, the U.S. Fish and Wildlife Service's archaeologist at the refuge, has told the tribe that she has seen pictures in news reports of militants sitting in her office, even at her desk with files open that contain sensitive information about archaeological sites belonging to the tribe.

And as far as their claims of respecting Native lands and artifacts, that's bullshit, too.  Keeler writes:

Bundy supporters have damaged Native American archaeological sites before, most notably, when they drove ATVs through a canyon trail in Utah in protest of protected federal lands trampling the ruins of homes belonging to the ancient Puebloans.  Also, the Southern Paiute tribes in Nevada have accused the Bundy family of defacing ancient Paiute petroglyphs in Gold Butte.

These are the kind of people who should have access to archaeological sites and a vital wildlife refuge in the name of protecting private interests?

And another thing: we need to stop calling these scofflaws a "militia."  Their favorite Constitutional Amendment, the Second, talks about a "well-regulated militia."  But regulated by whom?  Article One, Section 8 of the Constitution says the following about militias:


The Congress shall have Power To... provide for calling forth the Militia to execute the Laws of the Union, suppress Insurrections and repel Invasions;  [and]

To provide for organizing, arming, and disciplining, the Militia, and for governing such Part of them as may be employed in the Service of the United States, reserving to the States respectively, the Appointment of the Officers, and the Authority of training the Militia according to the discipline prescribed by Congress.

Did you catch that bit about a true militia being overseen by Congress?  That's a pretty important bit.

These aren't militiamen.  These are butthurt whiners who resent any legal incursion into their being able graze their cattle wherever they want to for free.  They don't want justice; they want carte blanche to flout whatever laws they find inconvenient, and no costs or consequences.  Furthermore, they're hypocrites.  They rail against the welfare state and "government handouts" while accepting government loan money to the tune of $530,000, and still want to appear to be the wronged party.

But given that they are heavily armed butthurt whiners, the government has (understandably) not been eager to step in and create a bunch of Waco-style martyrs for the cause.  No one doubts that these people would fire if they felt threatened, and more than one of them has stated his willingness to die rather than surrender.  So the authorities are playing a waiting game, while the costs for the extra security and monitoring of the standoff are running into the tens of thousands of dollars a day -- a cost that Harney County judge Steve Grasty has stated is going to be billed to the Bundy family.

So I understand why the feds aren't storming the castle.  But man, it just pisses me off that a bunch of petulant children with big guns can simply waltz in and take over public land (public, you know?  Meaning owned in trust for all of us?), and everyone simply stands around waiting.

My solution would be to block the (government-maintained) roads so they can't get out, stop the (government-provided) mail service, and cut the (government-managed) electricity and water to the refuge headquarters.  See how long they last in an eastern Oregon January with no help from the people they claim are the pinnacles of evil in our society.
Posted by Gordon Bonnet at 2:04 AM